Today in the garden ... potting by moonlight 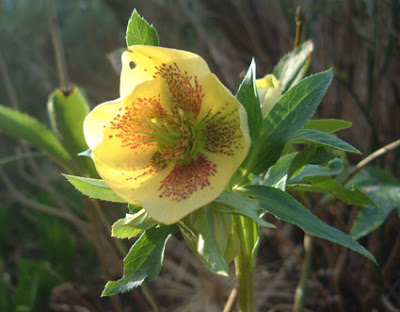 Just as a break from the veg reviews, I thought I'd post up a couple of pics taken in the garden today.

The top one is a yellow hellebore from a local nursery (it's an "out-take" from one of their breeding projects) and below is a picture of an overwintered Cheltenham Green Top beetroot, looking decidedly bronze-topped but full of healthy new growth.

There's not a lot else out there at the moment, and the garden also looks a horrible mess, because I've done no clearing up at all and the shrivelled remains of last year's crops are still drooping and tangling all over the place. I make no apology for it though, because it gives the birds something to eat through the winter, gives beneficial insects somewhere to overwinter, and when I finally dig it all in it will benefit the soil too. The other reason for it of course is my sluttish approach to garden tidiness. But the advantage of a blog is that I only have to show you pictures of things in close-up so you can't see the muddle all around it. 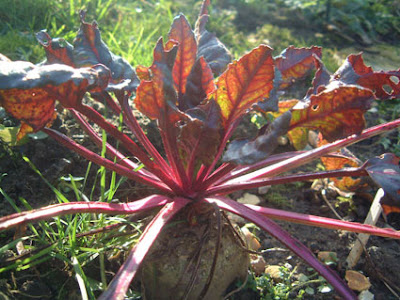 Talking of muddle, our kitten is now 8 months old and going through a horrible teenage phase (at least I hope it's a phase, or we're in trouble). Like a lot of teenage boys he's fidgety, petulant, smelly, communicates mainly with chimpanzee noises and likes randomly destroying things. This morning I found my husband's iPod earphones in the cat basket along with the usual ripped up tissues and till receipts. He knocked an entire propagator of pea seedlings off a windowsill the other day. Husband was shouting "aaargh, my carpet!" and I was shouting "aaargh, my peas!" Large squidged areas with pawprints have been appearing in seed trays and several chunks have been bitten off a cactus (I found those in the cat basket too). What we really need is a Prisoner-style "orange alert" system, where whatever mischief the kitten is involved in you press a button and a big white weather balloon goes after him and swallows him up. What a lot of running about that would save me.

Anyway, I've been sowing peas today. Yes I know it's a bit early, but I'm experimenting to find out what I can get away with and which varieties best cope with having their butts frozen off. I have one lot of plants out there in the cold frame already, a hardy variety called Alaska, kindly sent to me by Patrick from Bifurcated Carrots, and they seem quite happy so far. Having said that, it is preposterously warm here for the time of year. I'm not organised enough to have a garden thermometer but it was certainly mild enough for me to work outside without a coat and I had the back door open for a good hour or so, which was very pleasant. I didn't get my pea planting finished before nightfall, but it didn't matter ... I was out there on the patio this evening happily stuffing bog-roll tubes with compost by the light of the moon.
Posted by Rebsie Fairholm at 9:59 pm

One of our kittens once chewed through my husband's hearing aid cords during the night. He wasn't very popular next day I can assure you!

Oh dear! I can imagine. The crucial question though ... did he grow out of it? (please say yes, please say yes...)

omg...I try my best to keep her out of my seed flats but the other day I found pieces of hosta seedlings strewn about. And for some reason, she like cactus as well. lord only knows why, its a very prickly one as well. She kept breaking off pieces and I would find them (sometimes while barefoot) scattered about the living room. I'm not even going to discus the african violets trama....

Hopeing she grows out of it soon ;)