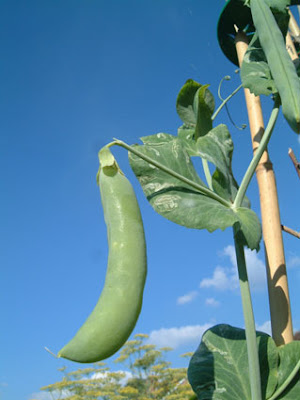 I can only partially review this variety this time around ... I had to save most of the crop for seed and didn't get a chance to do a proper taste test. I'll be growing it again this season so hopefully I'll find out more about it.

The first thing I did find out about it is that the seeds are prone to rotting at the germination stage. I only had eleven seeds to start with, and as a matter of policy I try not to plant my whole stock at once, no matter how small the sample, so I just sowed eight. Of those, three germinated and five went mouldy. It may just be that I got unlucky, or was careless with my watering. It's a common problem with peas ... they rot very easily, but still need plenty of moisture to germinate, so getting the balance right can be quite tricky. But it certainly seemed to me that Champion of England was more vulnerable to this than any of the other varieties I grew.

So I sowed a new batch with the three remaining seeds and this time I put loads of perlite into the compost. That seemed to fix the problem OK. A few more seedlings died off after planting out, so I ended up with only three productive plants.

Once it gets going, Champion of England is fairly typical of an old-fashioned gardener's pea. It's very tall, easily reaching 6 or 7 feet, and quite slender and elegant. The leaves have whitish silver markings, as peas often do. The flowers are elegant and a pale creamy white. Then you get long, long pods, green and slightly scimitar shaped with about 8 or 9 average-sized peas in each. 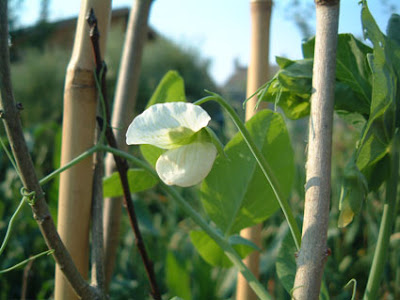 As I was desperate to ensure my future seed supply I avoided eating too many, but I did try a couple of immature pods as raw mangetouts. They were very sweet and yummy. I also tried a couple of pods worth of raw mature peas, and they were very sweet and yummy too. Champion of England has a reputation for exceptionally good flavour and that certainly seemed to be the case.

Unfortunately my plants had a short-ish season before being struck down by a virus. But I certainly liked this variety enough to want to try it again.

Champion of England is a rare variety and not commercially available in the UK at the moment, although ironically it seems readily available in North America. It's over 160 years old and was very popular and well known in its heyday, which lasted until the early 20th century. As was its breeder, William Fairbeard, who ran a nursery in the Kent village of Teynham and was a very well respected pea man of his day, introducing several other commercially successful varieties (not all of which have survived). Charles Darwin wrote to him in 1855 for advice on pollination issues while he was writing Natural Selection.
Posted by Rebsie Fairholm at 4:55 pm

Thanks for all the great information on such a great variety. After I read your review last spring I tracked down some seeds of Champion of England from Prairie Garden Seeds (www.prseeds.ca) of Saskatchewan. They did really well (as did all our peas this year) however they reached a maximum height of only two feet, unlike yours at 6-7 feet. Other North American growers seem to be reporting similar short plants. It's possible that the variety has diverged over the decades into distinct North American and European strains. I'd be really interested in trialing the same strain strain you grew at some point to compare it to the North American Champion of England.