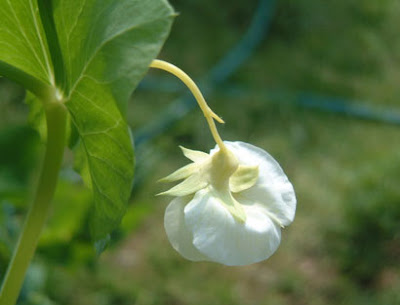 I have at least three or four plant breeding projects which will be ready for naming in 2009.

This is the first ... a new mangetout (snow) pea called Luna Trick.

Named in honour of my friend and music collaborator Daniel Staniforth, a shining inspiration who plays cello for me along with a seemingly endless range of other instruments; Daniel releases his own alt-rock music under the name of Luna Trick, so this beautiful moon-like pea is for him. 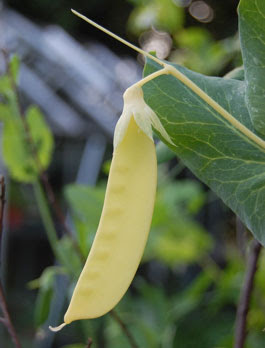 Luna Trick was bred from a cross of Golden Sweet x Sugar Ann. It was one of the obvious stand-out phenotypes in the F2 generation in 2008, producing a beautiful and abundant plant, though its greatest asset is its outstanding flavour (which must be carefully selected for in future generations). This is what the variety should look like when it's stabilised:

Growing vigorously to 6ft, it has distinctive yellow-green stems, and bears single rounded moon-white flowers on pale yellow stems so curvy they sometimes turn right over and bloom upside-down. The calyx is cream when young but at maturity turns moon-white with green mottling. Pods are pale yellow, quite large and succulent. As they mature they take on a porcelain-like translucence and the small peas can be seen inside, 8 or 9 per pod. Being a mangetout type, Luna Trick is completely fibreless and the pods are edible at all stages. The absence of fibre helps give it its translucence but it also means that the pod cannot keep its flat shape at maturity ... the peas bulge through and the pod buckles and twists, taking on a crescent shape. The really special feature is the pod flavour, which is exquisitely sweet, and a major improvement on its yellow-podded parent. The flavour has a full and rounded character as well as being sweet, and the thickish pod walls are unusually juicy. Even at a large size they can be eaten straight off the plant with no trace of bitterness. The peas themselves are not huge but very abundant, and sweet enough to be worth eating in their own right, raising the possibility of this being a dual-purpose variety. The one fault the peas have is a tendency for the skins to split if watered too heavily or erratically (either by me or the English weather). 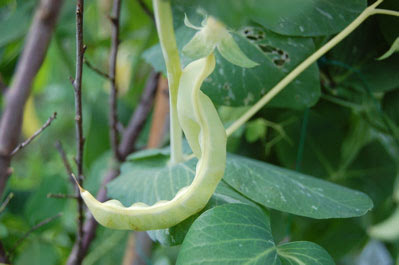 The absence of any fibre inside the pod makes it impossible for it to stay flat. It's a bit weird-looking, but I rather like it. The pods also turn porcelain-translucent as they mature, so you can see the peas inside.

Although this pea has got its name this year, that doesn't mean it's ready for general release ... it will probably need at least another year's work. The basic format of a breeding project goes like this: two varieties are crossed together to make an F1 hybrid. The F1 seeds are all mixed together and don't get a name or a number ... there's no point, as they all look pretty much the same. The only purpose of the F1 generation is to provide as much F2 seed as possible. The F2 generation is where the magic happens ... as all the genes in the lottery get re-shuffled randomly and create enormous differences between siblings. So I treat each F2 seed as a unique individual and give it its own identifying number. Once I've decided which of the resulting F2 phenotypes are worth pursuing, the number is then applied to all subsequent generations so I can keep track of its lineage. In this instance, the plant I wanted to keep was one called YSS 25 - quite simply plant number 25 in my Yellow Sugar Snap project (which so far has produced just about every imaginable phenotype except a yellow sugar snap, but never mind). So at the end of last season I collected all the seeds from YSS 25, and these are now F3 seeds. Although they will display a certain amount of variability they should mostly follow the blueprint set in the previous generation, so they don't get their own individual numbers ... they are collectively labelled YSS 25 F3, and are now the basis for a new variety. It needs to keep its number so I don't lose track of its pedigree, but you can see why I prefer to call it Luna Trick. 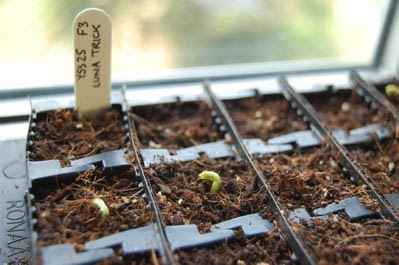 2009: new seedlings just starting to sprout. This is the F3 generation

It's still early days on this project, but I'm hopeful that Luna Trick will be among the first of the new pea varieties to be released. Why? Because most of its desirable traits are made by recessive genes. Recessives are the joy of a plant breeder's life because they are so easy to stabilise. For example, the yellow pods are made by a recessive gene called gp (golden pod). I can deduce that the Luna Trick prototype carried a perfect matched pair of gp genes ... because if it didn't it wouldn't be able to express yellow pods. If it had only one copy of gp it would default to green pods, with the yellows just showing up in a proportion of its offspring. The fact that it was yellow-podded means I can be fairly confident that all its offspring will be yellow-podded, because it has only gp genes to pass on. The same is true of many of its other traits ... it has matched pairs of recessive genes for fibreless pods (two genes), white flowers (one gene) and for sweet flavour (two or more genes), so I can expect it to have high levels of stability for all these traits. These characteristics are joyfully easy to predict.

Some of the variability is also predictable. Tallness is a dominant trait in peas, made by a gene called Le. The original Luna Trick plant was tall, but it was bred from a cross between a tall pea and a dwarf one so I don't yet know whether it has one copy of the Le gene or two. If it has inherited two, it will breed true for tallness. If it has only inherited one (which is statistically more likely) then I can expect to see the recessive dwarf gene show up in a quarter of the offspring, and I will have to keep selecting the tall ones for several generations until the dwarves stop showing up.

Fortunately with peas you can recognise tall and dwarf phenotypes very early on, while they're still young seedlings. This is because the difference between a tall pea and a short one is simply down to internode length ... the amount of stem it makes between each set of leaves ... which starts to show itself when the plants are only a few days old. Thus I should be able to "rogue out" any shorties before I even plant them in the garden. Though I will probably plant them separately from the others and keep some seed from them, just in case I ever want to create a short version of the variety. (My breeding work focuses on tall peas as they are wonderful and deserve a renaissance after being woefully neglected for the last 100 years, but some people do like dwarf peas so I'll keep the options open.) 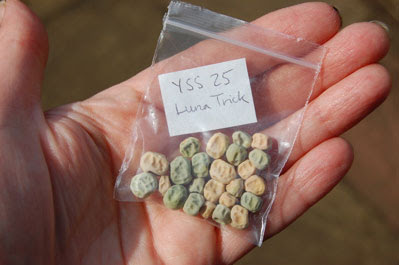 You can also see from this picture that it has variability in the seed colour, and comes in cream or green. The colour of a pea seed is made by the cotyledons (seed leaves) hidden inside. The dominant cotyledon colour in peas is yellow/cream ... and clearly Luna Trick has inherited this ... but it has also inherited a recessive gene catchily called i, which produces green cotyledons. (Put into technical terms, it's heterozygous at the i locus.) I could select one colour or the other ... the green ones, being recessive, will breed true for greenness, while the dominant cream ones may be hiding recessives within them and will show some further variability. But I'm actually not fussed either way ... the seed colour is not especially relevant in this project, so I'm planting them all without selection. If I was a commercial plant breeder I would probably want to select more rigorously to get a uniform product ... but I'm not, so I'm more interested in maintaining a healthy bit of genetic diversity.

Having made all these predictions, "expect the unexpected" is the mantra of any gene-reshuffling endeavour. It's likely that I'll find some unforeseen variability in the twenty-five or so plants I'm growing in this generation. Some will be caused by hidden recessives making their presence felt, and some will be caused by pleiotropy (genes which have more than one function) and unexpected synergies between newly combined genes. But that's OK ... for me it's one of life's greatest joys to see these new plants emerge into the world, each one subtly unique, and see what gifts they have to offer.

More information about pea genetics can be found in the JIC Pisum Gene Database.
Posted by Rebsie Fairholm at 7:11 pm 38 comments: