Seeds too pretty to plant? 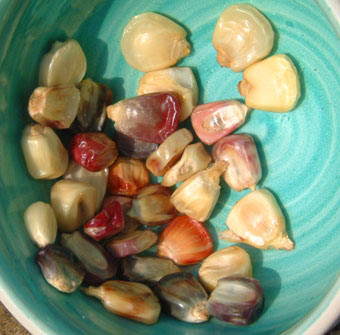 Sometimes when you open a packet of seeds you find that the seeds themselves are so gorgeous it almost seems a shame to sow them. Like this Rainbow Inca sweetcorn, which comes in a tantalising mixture of reds, pinks, oranges, yellows, purples and charcoal blacks, not to mention combinations of stripes and streaks of all colours. These seeds did end up buried in compost modules ... but it pained me to do it!

Anyone else got any seeds which are too beautiful to plant? 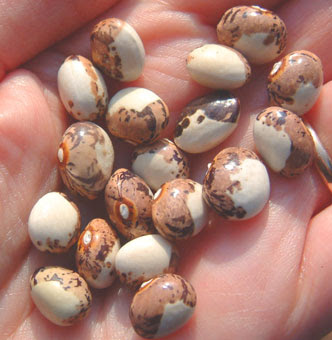 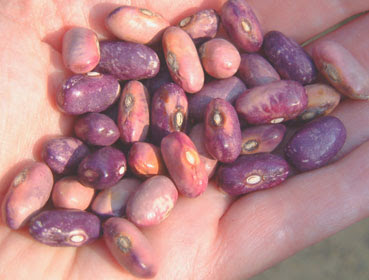 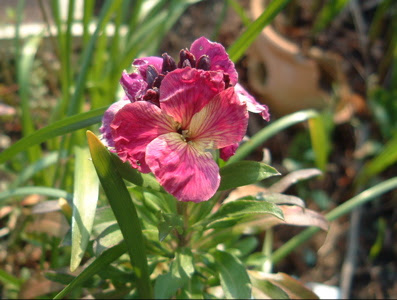 In between potting up about 500 seed trays over the last couple of months I've been involved in the launch of a brand new blog. Entitled Root Cause, it's a joint effort between myself and Patrick at Bifurcated Carrots but the idea is for it to become a multi-contributor blog, so if you like the look of it and want to write something for us please get in touch. It's just gone live today with a post about perennial onions and will aim to cover a range of subjects broadly connected with biodiversity, self-sufficiency, heirloom and open-pollinated vegetables, plant breeding and local and home-made things.

In its early stages it will probably focus mainly on gardening, since that's what Patrick and I are mostly into and feel most qualified to write about, but we're hoping it will evolve into something different from our current blogs and involve more people (bloggers and non-bloggers) who feel they have something to say. Ideas, comments and suggestions are very welcome!
Posted by Rebsie Fairholm at 8:44 pm 6 comments: 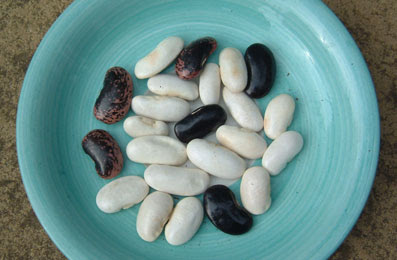 Hmmm, something tells me these white runner beans have got crossed.

My neighbour asked me "D'yer want some o' them white runner beans?" meaning the ones he was growing last year. I wasn't planning to grow any runners this year but I don't like to turn down the offer of home-saved seed, because I can always horde it or pass it on to someone else. I was intrigued when I saw what he had though, because some of the white beans were black. And he'd harvested them all from his White Emergo plants. Clearly some had been fathered by the Black Magic crop I grew last year, despite my attempts to use a large jasmine hedge as a barrier. And there were some other beans which were a more conventional black and purple mottled type, presumably cross-pollinated with another variety growing in someone else's garden. He was going to pick out the white ones for me but I said I'd be happy to take some of the funny coloured ones too.

It's a strange quirk of some vegetables such as beans and sweetcorn that a cross-pollination can show up in the colour of the seed coat. With most plants, you won't find out about an accidental cross until you grow the next generation of plants. But where beans of different colours are grown together, individual beans that come out the 'wrong' colour are a sure sign of cross-pollination. A cross won't always show up in the seed colour though, so it's not a foolproof way to check the purity. In other words, black beans appearing in the pods of a white-seeded plant are a sure sign of an accidental cross with a black-seeded plant. But that doesn't mean for sure that the white beans aren't cross-pollinated. They may or may not be.

I collected a number of seeds from my black-seeded plants and they were all perfectly black, but the likelihood is that some of them will have been crossed with the white variety. The fact that there are no white seeds among my black ones doesn't necessarily mean anything, other than that the black colour is probably dominant.

Luckily none of this matters very much. My neighbour really doesn't care what variety of runner bean he grows, he just wants runner beans. The accidental crosses are technically F1 hybrids so they may even show a bit of extra vigour if he's lucky. And although I normally try to keep my varieties pure so that I can save their seed, I wasn't bothered too much about my Black Magic runner beans because I knew it was not going to be possible to isolate them from the crop next door. Runner beans cross so readily, it was inevitable that if we grew the same crop in adjacent gardens we would get crosses. If I'd really wanted to be sure of getting some pure seeds from my plants I could easily have resolved this by putting a bag over a few flower clusters to keep the bees out, and saving seed only from those. But I wasn't very impressed with Black Magic anyway so I didn't bother.

Fortunately for me, my neighbour's vegetable growing doesn't clash with mine very often. Most of the things I want to save seed from are things which normally self-pollinate (like tomatoes, peas and French beans) or which wouldn't normally be flowering if grown purely as a vegetable crop (like beetroot, carrots and onions). And most are things my neighbour doesn't grow anyway, as he has quite a narrow range of things he likes. The neighbour on the other side of me doesn't do any gardening at all, so there's no risk of cross-pollination from there.

Meanwhile I've been having to think about cross-pollination issues within my own garden. I've been planting out my special peas. These are mostly from the Heritage Seed Library, and are rare varieties which are not available to buy, and of which I've only got tiny quantities ... four to eight plants of each. The obvious thing to do would be to put up a nice sturdy trellis and plant them all together, but I can't do that. I need to save pure seed from all these varieties, and so I have to be as sure as I reasonably can be that they don't cross-pollinate. Accidental crosses between peas are not very common ... unlike runner beans, peas are designed to self-pollinate and their flowers are sealed so that insects can't normally get to the reproductive parts. But even with self-pollinators, there is always some risk of crossing. How big that risk is in your own garden can only be found out by trial and error because it depends on environmental factors such as local populations of insects. As I have an organic garden full of plant diversity, the pollinating insects are likely to be more abundant than they would be in, say, a conventional farmer's field. And as I can't readily replace these pea seeds if I screw them up, I have to be extra careful.

So ... I spent all day yesterday making small individual wigwams and twiggy structures for them all in different spots all over the garden, so that all of them are at least 10 or 15 feet away from any other pea varieties. Because I don't have that huge a garden it's not possible to separate them any further than that, so it'll have to do. If I have a cross-pollination disaster I'll have to rethink my strategy completely for next year. But hopefully they'll be fine. It was a lot of work though to plant them all at individual stations like this.

And it also makes conventional ideas of crop rotation pretty meaningless in my garden. All my crops are spread out and jumbled up with a bit of this here and a bit of that over there. So I don't bother with rotation, other than trying to be vaguely conscious of what grew in a particular spot last year and doing my best to mix things up. Crop rotation is a practice which goes hand in hand with monoculture. When you fill an area with large amounts of the same crop, pests and diseases soon become a problem. That's because areas of just one kind of plant goes against nature's way of doing things, and the result is an imbalance. The more diversity you have in your garden, and the more you blend different crops together and interplant with other things, the less of an issue it is. Diversity enables the garden to find its own balance in which pests exist but rarely reach problematic levels. I'm a great believer in trying to make use of nature's tides and balances rather than fighting against them. So I don't practice crop rotation as such because it makes more sense in my garden to avoid the need for it in the first place.

And of course the other advantage of garden biodiversity is that it gives you an excuse to buy loads of seeds. Heehee.
Posted by Rebsie Fairholm at 1:18 am 3 comments: