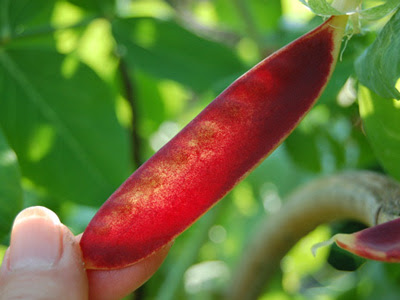 All together now ... oooooooooooh!!

The red-podded peas have now completed their life cycle, and in fact have started a new one, because I've already sown a batch of their F3 offspring.

Red-podded peas were an unexpected gift from my Purple Mangetout Project, which I'm doing on behalf of The Real Seed Catalogue. I really have to thank Ben of Real Seeds for making it happen. He sent me the Golden Sweet seeds to experiment with and I don't think I would have thought of crossing Golden Sweet with a purple podded pea if he hadn't suggested it. It was a good choice ... I think there's a distinct lack of genetic diversity in peas generally, and as I'm discovering in this and other projects, Golden Sweet is something really different and brings a heck of a lot of useful genetic material into the mix.

Among my F2 plants there is just one, known as GSC15, which has pure deep red pods. GSC stands for "Golden Sweet x Carruthers", followed by a number. It's just my own little code for identifying individual plants. 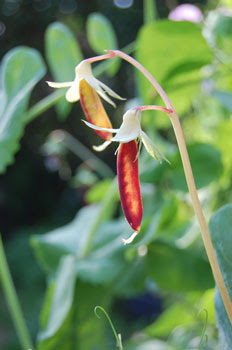 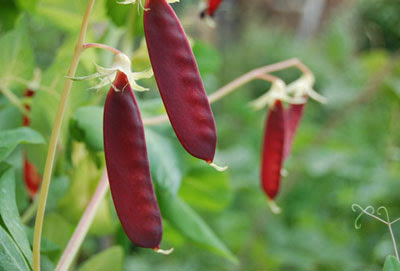 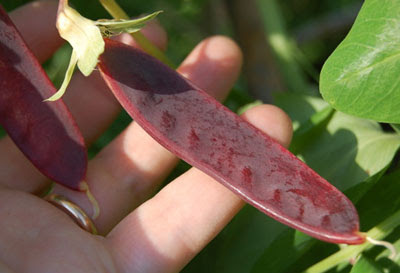 This plant always looked special and highly coloured, and in fact I posted a couple of photographs of it when it was just a seedling, because it was the most beautiful of the seedlings. It's turned into an amazingly beautiful mature plant. It has a whole range of candy colours as well as the spectacular crimson pods, even producing two-tone pink and yellow tendrils. It's an improvement on Golden Sweet, the parent it inherited its colours from. It grew vigorously and elegantly, and also had the grace to produce two pods per node. It really is a winner. There has to be something imperfect about it though, and I think that might be in the pods themselves. It's clearly not a true mangetout because it has some fibre and leatheriness in the pods. But I'm not sure it's cut out to be a sheller either ... the one pea I ate was a little bit starchy. It would be a shame if you couldn't eat the red pods anyway, so I'm looking to develop a fibre-free version.

This is not really a problem. The next generation is likely to show more segregation for hidden recessive traits and there's a good chance, I think, that I'll get something with the same strong colour but a true mangetout, or sweeter peas. 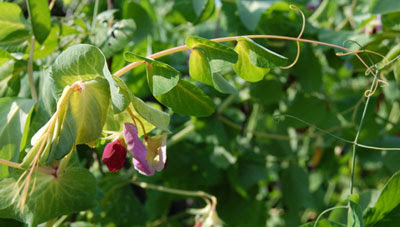 GSC15: the young leaves have a yellow tint to them, and a deep pink blotch in every leaf axil. The flowers are bicolour maroon and mauve, a trait inherited from both parents. 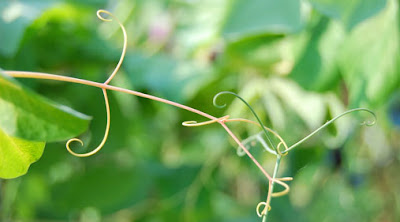 Even the tendrils are beautiful. The stems are peachy pink and the tendrils bright yellow. It's a difficult thing to photograph and this really doesn't do justice to it but you can see the contrast here as it clings to the ordinary green tendril of one of its siblings.

Yellow-podded peas always show a lot of yellow in the young leaves as the plant reaches the flowering stage, and of course red-podded peas ARE yellow-podded, with an extra layer of purple over the top to create the red. So GSC15 shows all the colours you'd expect in a yellow pea, with some additional pinky colours. The calyx (pixie hat) on the flower buds are pale cream but show quite a lot of pink streaking, which is something I haven't seen in any other plants ... but it is a natural enough combination of parental traits ... Golden Sweet is the source of the cream calyx while Carruthers' Purple Podded provides the pink streaks. 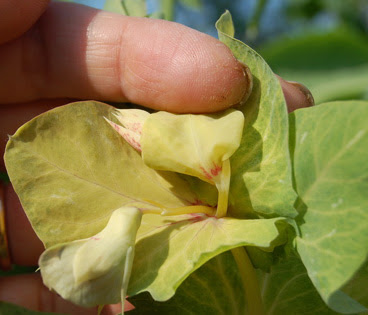 GSC15 plant top ... yellow leaves with a very bold, bright pink splodge in the leaf axil and also some strong pink markings on the flower buds.

Although GSC15 is the clear champion of this batch of plants, there were other red-podded peas which were mostly red but maintained some of the underlying yellow. Some more than others. GSC09 is quite promising ... it's a true mangetout, and the one pod I tasted was very nice. The red colour is quite patchy in places though, with only a few showing a dominance of red. The photo at the top of this post shows a GSC09 pod, one of the less yellowy patchy ones. Again, I'm hoping some further segregation in the F3 generation will give me more mangetouts like this but with a stronger colour.

Initially the red podders were all from my Golden Sweet x Carruthers cross, but later a couple showed up in the Golden Sweet x Desiree cross as well. The GSD plants were both dwarf phenotypes with mostly yellow pods and only a spraying of red. They don't look as promising as the GSC ones but it's interesting that this happened at all ... it suggests that any cross between a purple and a yellow podded pea could potentially produce red pods, and it's not an exclusive feature of the Golden Sweet x Carruthers cross. 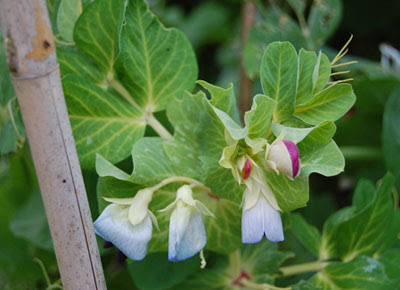 Flowers on a red-podded Golden Sweet x Desiree hybrid. Again it's a beautiful highly coloured plant with two flowers per node, although it only grows to a foot or two in height.

Depending on what traits show up in future generations, I may develop the semi-red peas into a new variety in their own right. They have a charm of their own, and although they're not as spectacular as the true reds, they are still a unique colour break. Some of them are yellow with just a bit of red edging, others are lightly "sprayed" with red all over, giving a peachy effect. 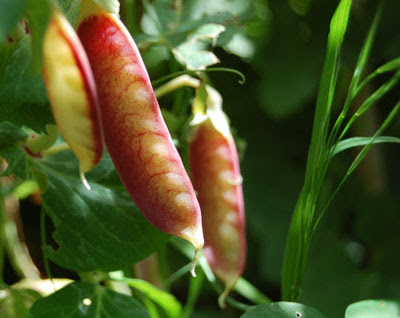 Bicolour yellow and red pods, one of the Golden Sweet x Desiree plants.

The next stage is to grow the seeds from all the red-podders. Normally in a breeding project you have to cross the F2 plants with each other to produce the F3. As peas are self-pollinating, however, all you have to do is leave them to produce seed naturally. There's still time for me to get another generation grown in 2008 as long as I start them off pretty promptly, so I've been harvesting the pods as soon as they reach maturity and drying them in trays indoors. I judge "maturity" as the time when the calyx starts to dry out and the top of the pod (where it joins on to the plant) starts to look a bit sunken and leathery. I save the seeds from each plant separately, which is a lot of work but enables me to keep track of everything in future generations, and learn from it.

In addition to starting off a batch of F3s, I've sown another lot of F2s as I still had plenty of F2 seeds left. I'm hoping there will be some more red-podders among them which will give me more material to work with and hopefully more genetic combinations. 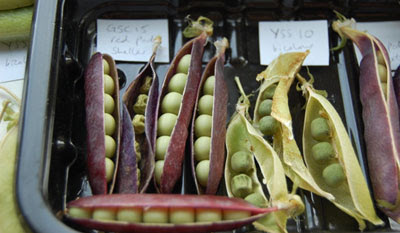 The first few GSC15 pods drying indoors. The pods go purple as they dry out, and the peas stay green but shrivel to a tiny size. YSS10 is one of the beautiful bicolour-flowered types from my yellow sugarsnap project. I alternate them so they don't get muddled up.
Posted by Rebsie Fairholm at 11:05 am 22 comments: