No I haven't given up 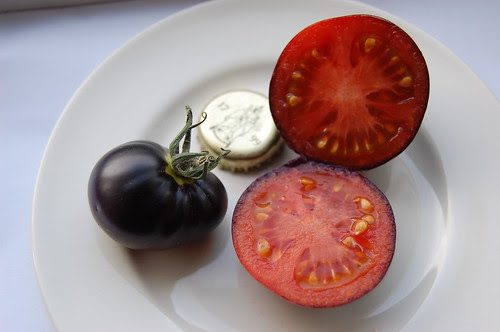 Last year I had to leave most of my garden fallow and take a year off. It was really a case of too many things happening at once - mostly good things, but nevertheless I got left behind with my workload until it was no longer possible to catch up. So I just focused on getting the pea trials done and a couple of the more important breeding projects, and the rest of my gardening year got shelved. There was no time to write up stuff for the blog - I only just managed to keep on top of the data collection for the trials and experiments. All the non-essential gardening went on hold, and most of the garden was left unplanted, seeds left unsown. Because I was finding it so difficult to do any gardening of my own, I dropped out of the online community … because I found it a bit depressing to see all the goodness I was missing out on. So I apologise if you have been used to seeing my comments on your blogs and have not heard from me for a while.

So what have I been doing instead? Well the main thing I was doing was recording and releasing my second album, Seven Star Green. Which has just had a spectacularly glowing review in the prestigious fROOTS magazine. I should explain that we release our music on our own label, which means we have to do all the promotional work ourselves - which is a grim, tedious, time-consuming and often demoralising slog! It's really because of this that I didn't find the time to commit to the garden in 2009. Daniel and I also launched an additional music project, Alchymical Muse, which is slightly more arty and uses our voices in combination - not just in English but in Gaelic, Occitan, Langue d'Oïl (medieval French) and even our own made up languages. (We just enjoy making things difficult for ourselves.) We're working towards a debut album release for that but it's a little way off yet.

Among the things I was able to grow were four or five varieties of tomatoes, including the amazing coal-black variety OSU Blue Fruit, shown above, which is still under development at Oregon State University in the US. I also conducted a trial planting of around 30 varieties of pea, which involved a lot of note-taking and photographing. The Luna Trick pea project was a huge success - in fact I got twice as much out of it as I'd hoped for - and will be the subject of its own post in the near future. Less easy was the red-podded pea project. A growout of the seed from the original plant yielded some wonderful beauty of colour but alas, none with edible pods. Which leads me to conclude that it doesn't have the necessary genes, and if I'm going to make any progress with it I will have to try a different tack. That will have to include crossing it with something else to introduce the two recessive genes needed for edible pods, and going back to the previous F2 generation to see if there are any other red phenotypes with a more promising genepool. Another setback was an invasion of seed-eating mice who depleted my available seedstock quite drastically. Again, I will write up more about this project when I have time. But here's a piccy from the 2009 crop. 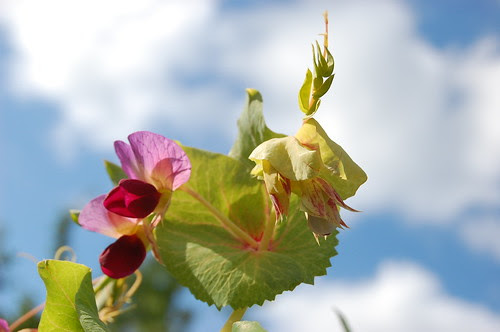 Red-podded peas: F3 plant in flower. It has the most beautiful buds of any pea I've seen.

I've not been able to take part in seed swaps this year, for two reasons. Firstly my seed stocks are very depleted, and much of what I have got is older seed, which will have to be germination-tested before I can send it to anybody. Secondly, I already have a backlog of seeds which people have sent to me in previous years, and I've already got more than I can realistically hope to grow with the time and space I have available. Every year my breeding projects take up more and more space, as well as the increasing number of growouts I need to do with varieties I've already collected in order to maintain them. So the traditional seed swap model is not practical for me any more - it's not that I don't want the seeds people have to offer me, I simply have nowhere left to grow them! I guess the solution is to set up a system where people who want seeds from me can just pay for the postage rather than sending seeds in return. I can probably do that with a PayPal button but I haven't had time to do it yet.

You may notice that the blog has a new design. Well, 'design' may be too strong a word because Blogger has a pretty rubbish range of templates to choose from compared to the likes of Wordpress. My main www.daughterofthesoil.com site was designed from scratch in Dreamweaver, which gave me a lot more control but it's also a lot more work to do updates, so sticking with one of the Blogger templates is the only viable option for the blog. The main thing that bothered me about the previous design was the black background and the white text. I originally chose that layout to showcase my photographs, because there's no doubt in my mind that most photographs look their best against a black background. But the opposite is true of text - it can be quite wearing on the eyes to read white text on a black background. And much as I like to show off my photography, the legibility of the text is more important. I'd been thinking about changing it for a long time, but it didn't look too bad on my computer so I didn't worry too much about it. But then just before Christmas my trusty old G5 finally popped its chips and I had to replace it. Now equipped with a shiny new iMac (whooo) I went to have a look at my blog and uuuurrrrgh! Websites always look different on different screens and with different browsers, but I was astonished how drastically different the blog looked on the iMac compared with my old computer. The font was much heavier and it made the column width appear narrower - just cramped and hard to read. So, now we have a white background for better legibility, and a flexible column width which I hope will enable it to adapt to different screen sizes without going weird. The removal of the column width restriction also enables me to post slightly larger pictures, and hopefully that'll make up for the loss of the black background. 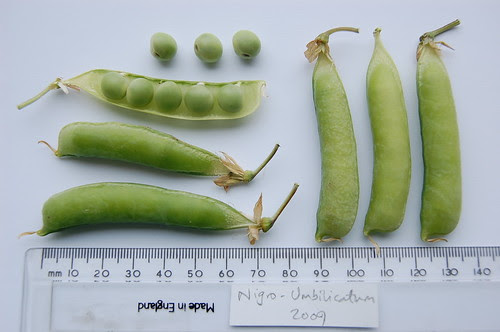 I'm experimenting with hosting my images on Flickr instead of uploading them direct to Blogger. I like Flickr, it has a much better interface than the cackhanded Blogger uploader and it displays images better. Maybe only a nerd like me would notice the difference, but still. I have a whole load of other stuff on there too, from 18th century gravestones to pavement furniture (yeah I do have some weird hobbies) so there's plenty to look at.

I must also take this opportunity to pay tribute to Val McMurray, a very wonderful lady devoted to the cause of promoting endangered vegetable varieties, who sadly had to relinquish her battle against cancer earlier this week. Founder of a seedbank in Canada with her husband Dan, the energy with which Val collected, trialled, preserved and distributed seeds - especially tomatoes - was absolutely remarkable, not to mention her kindness and generosity in supporting other gardeners with advice and encouragement. She was a ray of light and an inspiration, and will be deeply missed, although her spirit thrives in gardens all over the world - in 24 countries - where she sent her seeds.
Posted by Rebsie Fairholm at 11:51 am 25 comments: