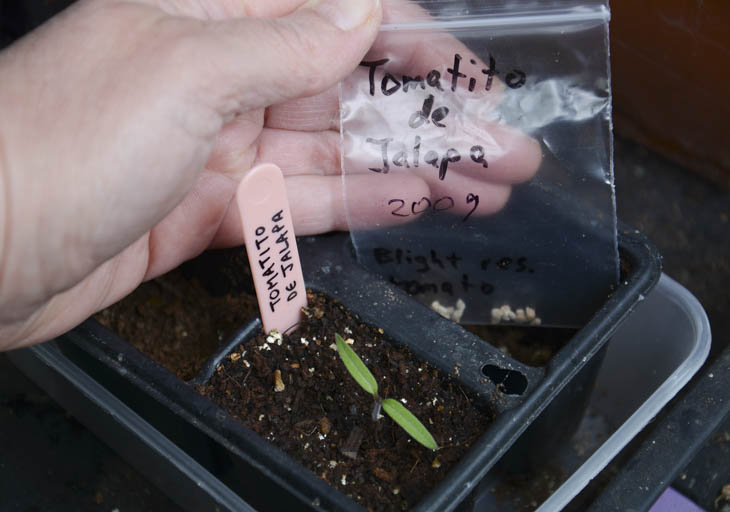 This year I decided I wanted to grow some more of a tiny globular red tomato called Tomatito de Jalapa which was given to me years ago by my friend Patrick Wiebe. This is a blight-resistant variety, at least to some extent, which grows quite well outdoors in the UK, and I also love the taste of it, and the tiny, almost perfectly spherical tomatoes. It's not a normal garden tomato, it's a species of wild tomato from South America which is not (to my knowledge) commercially available. Therefore it's quite rare, and you can't buy its seeds in the shops.

When I grew it in the past, I saved seeds from it. Of course I did. But I'm buggered if I know what I've done with them. Somewhere there must be a box of home-saved tomato seeds hiding in a corner of my incredibly well organised house, because there are other varieties I'm missing which I know I've saved seed from. Anyway, when I was sowing my tomato seeds this year, I couldn't find them. I did, however, still have the little baggie of seeds which Patrick originally gave me, and which he'd sensibly labelled with the year they were produced: 2009. So these are 10-year-old seeds. The received wisdom in many gardening books is that old seeds won't germinate, or will produce only feeble plants, but I know this to be bollocks. So I put a bit of compost in a tiny flowerpot and sowed one of Patrick's decade-old seeds just to see whether it would grow. As you can see in the photo above, it did.

I dug out a couple of other geriatric seed packets from my box which I wanted to resurrect. One was an unidentified variety which I call Café Rubik, because I filched the original single cherry tomato from a café in Cheltenham called Café Rubik, in April 2010, after having it arrive on my lunch plate and deciding it was probably the best tomato I'd ever tasted. It must have been an F1 hybrid, whatever it was, because it segregated into three different fruit colours the first time I grew it. That doesn't put me off, of course ... I love to see a bit of segregation so that I have the option to select something new and unique. So Café Rubik the F2 still lives, the seed from that single original tomato (plucked from a salad, no less) still germinating after nine years, long after the café itself has closed down. 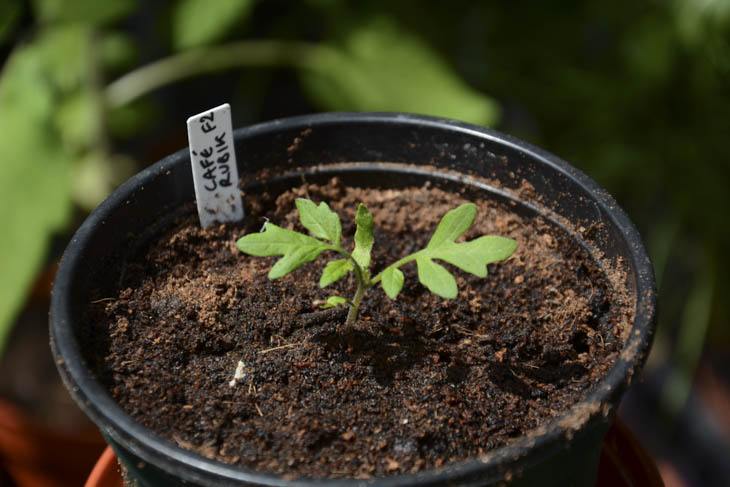 Another one I decided to grow out was this ancient packet which I got as a freebie from the Heritage Seed Library. Salt Spring Sunrise, a Canadian heritage variety. God knows how old these seeds are; they're not dated, and I don't remember what year I was sent them. It could easily have been as long ago as 2007. And while the others I sowed had at least been stored in airtight grip-seal bags, these were just in a plain brown paper envelope, stashed in a cardboard box in the spare room. Anyway, I sowed two of these seeds, and one germinated. Initially it did struggle to free itself from its seed husk, and when it finally emerged from the soil it had ripped both its cotyledons clean off! It was left with a pair of green stumps. I didn't think there was much hope of it surviving, but after sitting there fattening up the green stumps for a couple of days, it began to grow its true leaves – and very quickly recovered. 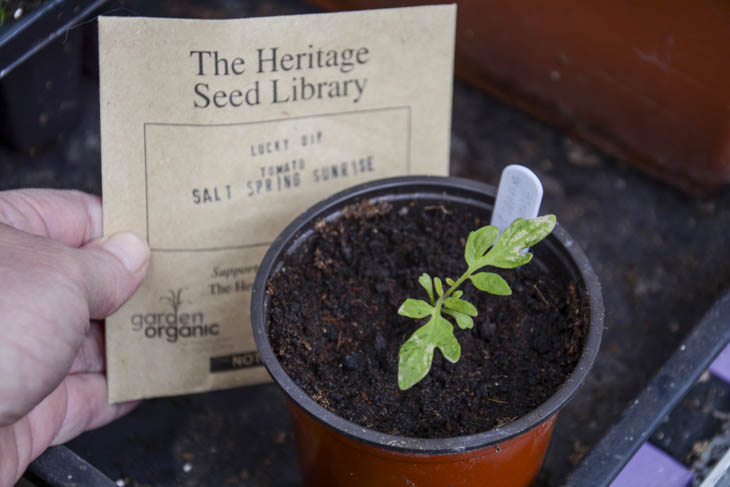 Inspired by the longevity and resilience of these seeds, I thought it might be interesting to do a more formal germination test on some of my other tomato seeds, to find out just how old or craply handled they have to be before they stop germinating. As I never throw anything away, I had no shortage of ludicrously outdated specimens to choose from. I selected six packets of varying ages, which included some purchased seed and some I'd saved myself. Here they are: 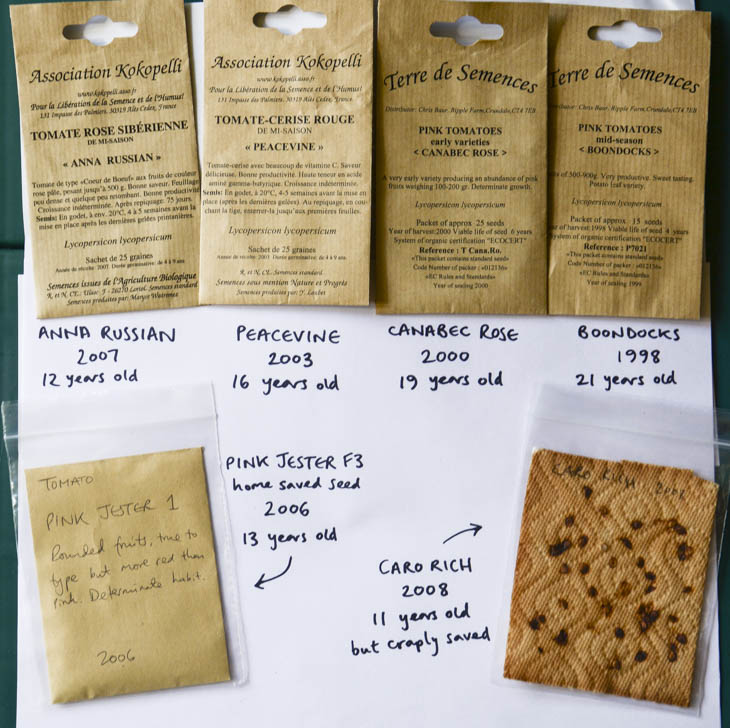 Some of the bought seeds were from Association Kokopelli and some were from Terre de Semences, which is what Association Kokopelli was called before it became Association Kokopelli. I haven't purposely singled out this supplier, I just chose them because they're the oldest seeds I have in my collection. The ripest vintage was a pack of Boondocks produced in 1998, which makes them 21 years old at the time of sowing. Close on its heels came the millennium-era seeds of Canabec Rose; a 16-year-old pack of Peacevine Cherry from 2003, and some Anna Russian from 2007. Bringing up the rear were two packs of my own seeds: an F3 derivative of a variety called Pink Jester which I originally bought from a supermarket and saved seeds from, and the special beta-carotene rich orange variety Caro Rich, which I hadn't even saved properly – they were just scraped out of the fruit onto a piece of kitchen roll and left to dry. These seeds are 13 and 11 years old respectively. 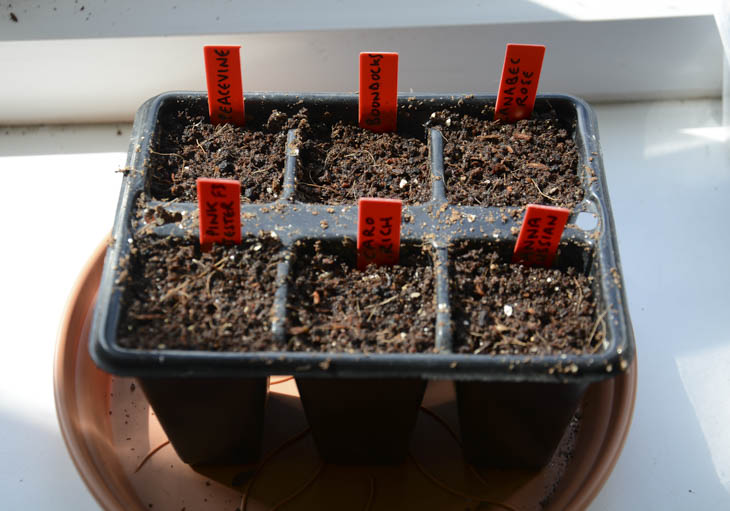 The test was not all that scientific. I filled a small 6-module tray with compost, and on 3rd May I sowed two seeds of each variety in the front row (the younger ones), and four each of the varieties in the back row, since the older ones were less likely to germinate. These are very small sample sizes, but I didn't want to sow too many just in case they all grew! I'm emotionally incapable of murdering seedlings which are surplus to requirements, so if I'd ended up with a dozen plants I'd have had to find room for them all somehow in the garden.

The tray of seeds was kept on the windowsill in my music studio, which has a radiator under it, and this was on fairly often as the weather was so bloody cold. This bottom-heated windowsill is brilliant for germinating tomato seeds and it didn't take too long for the first germination. 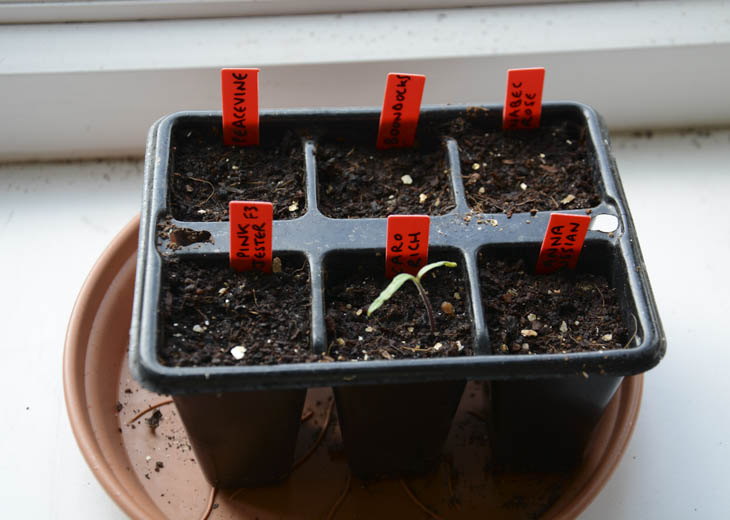 Then came Pink Jester F3, a couple of days later. Both the seeds of that one germinated, while with Caro Rich it was just one. At 11 years old, Caro Rich was the freshest of all the varieties I sowed, but it was very interesting to me to see it germinating so readily, given that the seeds had been saved in the crudest way. The proper way to save tomato seed is by the fermentation method, which is what I would normally do and recommend, and the simple method of lobbing them onto kitchen roll and letting them dessicate into a disgusting scabby crust is widely frowned upon as a bad way to save tomato seeds. For one thing they stick irretrievably to the kitchen roll, so when you want to sow them you have to tear around them and sow them with some of the kitchen roll still attached. There's also the matter of the germination-inhibitor chemical which tomatoes naturally produce within their gel, which stops the seed from germinating while the gel is there. The fermentation method removes this very effectively; the kitchen roll method doesn't. Though you could argue that at 11 years old, any biochemical inhibitors had probably degraded anyway. I also stored the kitchen roll sheet in a sealed plastic bag after it was fully dried, so that might have helped to preserve it. But still, it was interesting to see this seed germinating normally in spite of everything.

I'd still recommend the fermentation method for most tomato seed-saving, but if you really can't face doing it, or haven't got time, or it's a tiny quantity of seed which is too fiddly to ferment – you should be fine just to splat it onto a paper towel, and still expect to get a decade's worth of viability out of it.

Following these initial germinations I didn't get any more. I kept the trial going for around a month, but nothing else showed up. I took the tray out to the greenhouse and potted up Caro Rich and the two Pink Jester seedlings, all three of which are growing on well. I don't generally find that plants from old seeds are inferior to plants from fresh seeds (though I'm sure some commercial seed companies would like people to think that). They may be slightly slower to germinate and have less available nutrient within the seed to get them through the germination process, but once they've established themselves with a root and a shoot they usually grow pretty normally. The really old seeds in my trial didn't germinate though. Maybe some of them would if I sowed a larger sample. But for now, I forgot about the rest of the modules as I got into my busy season, and they stayed on the top shelf in the greenhouse. Until, seven weeks after I sowed the seeds, I found this: 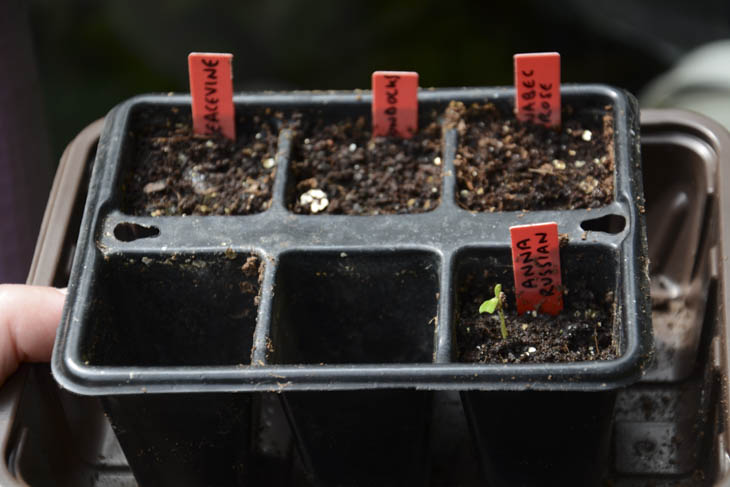 Yes, it took its time all right, but Anna Russian germinated, at 12 years old. This is a phenomenon that most tomato growers have probably come across, even with much fresher seeds than these: a tray which fails to germinate is cast aside, only to be found sprouting quite happily several weeks later after being completely abandoned and neglected. Sometimes tomatoes just inexplicably won't sprout until they're ready, and they won't be rushed.

Sadly, the day after this photo was taken, Anna was razed off at soil level by a snail. So I won't be growing any of that variety this year. But still – it germinated.

One important observation I made with all of these antique seeds, and not just Salt Spring Sunrise which had the most extreme case of it, is that they were all very prone to getting the seed husks stuck on their heads when they first emerged from the soil. This is not surprising, as the older the seed is, the more it dries out and shrinks. It might be a good idea to try to reconstitute the seed with a bit of moisture before sowing it, to help avoid the problem of seedlings getting completely stuck and unable to release themselves, but I haven't done any experimenting to find out how best to do that. Maybe an overnight pre-soak would be enough.

The message of all this, in summary: don't immediately assume that a packet of old seeds is no longer viable – at least give it a go.
Posted by Rebsie Fairholm at 1:13 am 6 comments: