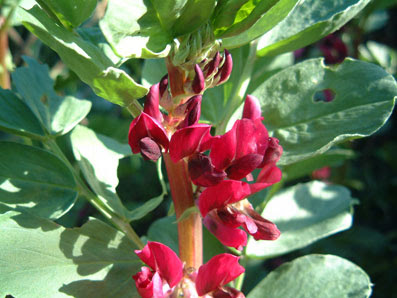 This has to be my favourite broad bean ever ... the old and un-named red-flowered or crimson-flowered variety. I love it. The flowers are the most beautiful colours and glow in the sunlight.

Clearly others love it too because it's had a surge of popularity in recent years. There are still only a handful of suppliers selling it but it's been busily doing the rounds at seed swaps, so it's not too difficult to find these days.

Very simple descriptive names like "Crimson-flowered" ("Early long purple", "Tall white" etc) are often an indication of a variety's age, because it wasn't really until the Victorian era that romantic names like "Lazy Housewife" and "Egyptian Turnip-Rooted" became de rigeur. Red-flowered broad beans were described in seed lists in the late 18th century, and what we have today is either the same one or a close variant of it. The variety seems to have come close to dying out, until an elderly lady from Kent donated it to the Heritage Seed Library in 1978. It had been grown by her market-gardener father, who was given the seeds during his childhood years a century earlier.

It's a smaller and more dainty plant than a conventional broad bean and grows to about 3ft with three red-tinged stems which usually stay up without support, at least until the podding stage. Leaves are a bright greyish green and fairly rounded. The pods are small and grow almost vertically, and the beans are pale green and about two-thirds the size of a modern type.

But they are very abundant, so yields are good overall. And the flavour and texture are fantastic. It has a slight firmness and mealiness in the texture which you wouldn't find in most varieties today but it's a nice kind of mealiness. And the flavour is sweet and lovely without any trace of bitterness. The beans cook to a nice bright green colour and only need to be lightly steamed.

The real wow-factor of this variety though is definitely its flowers. The crimson colour is so deep, voluptuous and translucent, and on spring days when the flowers are backlit by bright sunlight low on the horizon they can leave you staring at them for minutes on end in drop-jawed wonderment (they did me, anyway). And one of the unsung blessings of broad beans is that their flowers have a lovely scent. Red-flowered has the most incredibly beautiful smell ... and I speak as someone who finds a lot of flower scents headachey and nose-curdling. It's just delicate and lovely, and it stops you in your tracks as you walk up the garden path. The bees love it too and I noticed they were chewing their way through the base of the flowers to get inside them. 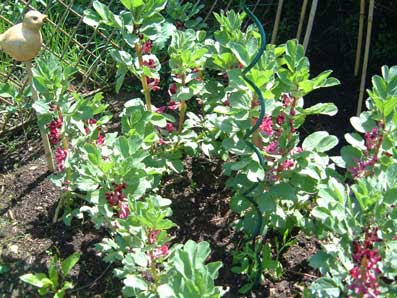 Other than a bit of nibbling by bean or vine weevils, who give the leaves frilly edges by eating little notches all the way round, the plants seemed fairly resistant to everything, pest-wise. And most significantly, only mildly bothered by blackfly.

Blackfly is the ubiquitous and inevitable pest of broad beans. For those who don't use sprays, the end of the broad bean season is often brought about when the plants (and pods) are so encrusted with solid black you can't even get hold of them to harvest them any more. So when I first grew this variety in 2005 and found it was completely untroubled by blackfly until the last week or two of the season, I was quite excited. I grew it again in 2006 and the same thing happened ... no blackfly at all until very late, and even then just a smattering (though there was some variation in infestation between plants ... I saved seed from the ones which stayed cleanest, which also happened to be the reddest-flowered).

As far as I'm concerned, this alone makes it priceless in the garden. I've lost so many broad bean crops to blackfly, which are quite disgusting things when they build up to critical mass, and the usual organic methods (pinching the tips and hosing the blackfly off) have limited impact. So to find a variety that just gets on and grows untroubled, looking immaculate right up until harvest time, is quite a coup.

The 'proper' colour for the flowers is a deep wine red with darker burgundy underneath, which fade slightly with age to a deep carmine. But there's been a lot of variability among the ones I've grown and I don't know if it's just me. In 2005 I grew six, and no two were the same. Colours, markings and combinations varied from pale pink, dark cerise, burgundy red, charcoal grey with a pink flush, or pale pink and black bi-coloured. I'm wondering whether the seed I've got has been accidentally cross-pollinated with a 'normal' black and white flowered bean, or whether they naturally have that much variation. They were all gorgeous, but I saved seed mainly from the deepest red ones.

In 2006 I grew 12 plants, mainly from my own seeds, but topped up the numbers with two from the original seed packet. I now don't know which ones were originals and which were mine, but I can guess: there were 10 normal deep red-flowered plants and two pink and black oddities. Broad beans do cross very readily so it would be no surprise if an open-pollinated variety like this had picked up a few stray genes from a neighbouring crop. It'll probably do it some good, too. And as long as I select the best red ones for seed each year the variability should soon disappear.

There is another old-ish broad bean with red flowers, Red Epicure ... but it's quite different, larger and with chestnut-brown seeds.
Posted by Rebsie Fairholm at 12:43 pm

I am so glad you are taking the trouble to write and post these reviews.

The nasty weedy (neighbor's) tree shading my back yard lost some more branches in the ice storm -- maybe they will finally chop it down and I'll have some sun to garden in.....

I used to save bean and tomato seeds, from year to year......

It must be very frustrating not being able to plant things. I hope something happens to enable you to start growing again soon.

It may be worth starting to collect seeds again anyway, because they will keep until whenever you need them. In spite of what the seed packets say tomato seeds stay viable for up to 10 years.

What a neat bean! I have never grown "broadbeans" and I'm not quite sure I know what they are (are they like green beans? or lima beans?) They sure are pretty :)

I think they're what you call fava beans!

ah, thanks for answering :)
That is one bean I cannot eat (allergic) which is why i've enver grown them. I will enjoy them from your blog instead.

I too grow these beans, bought from Robinsons. I grow mine in a block along the path where they can be seen! They are a sight to behold and folks always comment on them. Not the most beans per pod but I grow a common or garden variety for eating purposes. These are for looking at, although the beans are just fine. I take off the growing tips really early, and add them to a stir fry

i love flowers in red color.

Your plants looks good with a little flowers grow beautifully. However, it looks like grow in a tropical weather. Can it be grow perfectly in a high terrain?

Thank you for the extensive post on this broad bean - I started them in modules because we have had a very cold spring this year. Now I am trying to understand how they grow and what they want before I plant them out. Really looking forward to seeing them now and will put them near the path, as you say. Delighted to be trying them out. I have three varieties I usually grow (love broad beans!) but my favourite wasn't available this year (a saved seed variety called Londonderry), so here we go.

After having less than impressive results with The Sutton this year I was just about ready to give up on growing broad beans. In spite of that, I made an impulse buy of the Robinsons crimson flowered seeds at RHS Wisley recently, so it's encouraging to hear they did so well for you. I fit the occasional veggie in a small garden rather than having an allotment, so it's always great to have a plant that does double duty and is ornamental as well as edible.

I got these from an organic supplier in Ireland to try just because I love broadbeans and have mixed results growing them. But the flowers were so delightful that I hardly noticed how late it was before beans set. Lots and lots of small pods eventually. So now I get it. I plant early broadbeans in the autumn and these in the spring.