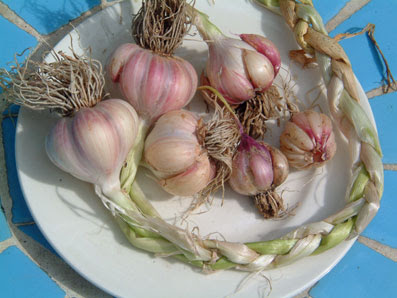 As it's been a very strange season weather-wise, it's difficult to make any judgements about produce from the garden this year. One plant which always seems to be a rugged survivor is garlic. My crop was afflicted with the worst outbreak of rust I've ever seen (a fungus which chokes the leaves with rusty orange spots). It was so bad that for the last month or six weeks most of my garlic plants have appeared to be dead. The foliage was so rust-choked it just died off completely, and even the main stems looked like dry sticks, straw-coloured with smutty spots. You wouldn't think anything would survive being reduced to that state. But under the ground, the bulbs were still thriving and growing.

That's not to say I've had a perfectly good garlic harvest. Most of the bulbs are smaller than they should be, and some of them have burst out of their bulb wrappers so they won't be any good for long term storage. But in terms of having enough to replant next season, and plenty more to eat, it's been a perfectly adequate harvest.

Take the Solent Wight in the picture above, for example. It's a softneck Artichoke (I think) variety, very popular in the UK in recent years as it has been bred for our climate (from French stock). It's supposed to produce large long-keeping bulbs. Mine are not large, but then I've never had especially large bulbs from Solent Wight in my garden, for some reason. The white outer wrappers are thin and see-through like tracing paper and as you can see, the clove skins underneath are extremely beautiful colours! I don't remember them being this beautiful last year, so maybe the growing conditions have intensified the colours. The flavour is pretty good even straight after harvest, plenty of taste to it but not overly hot or strong.

As I mentioned in a previous post, Solent Wight was the only garlic variety I grew this year which was completely unaffected by rust. The plants remained completely clean for weeks while all my other garlic was choked solid. There was a very small amount of rust on the uppermost leaves by harvest time, but it was very minor. 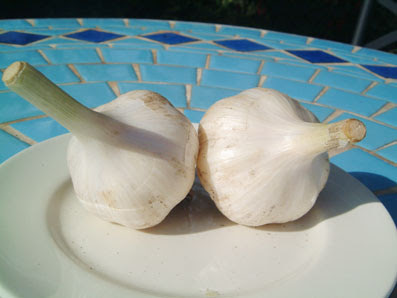 I've harvested a few bulbs of Persian Star too, but not all of them because they seem to be later maturing than my other varieties and some are not quite ready. This is a Purple Stripe hardneck variety, but it probably needs to mature a bit more before the purple stripes become apparent (the planting stock I got from Patrick was certainly streaked with purple). It has eight fairly equal sized cloves around a central stem and a classic garlic bulb shape. We had some for dinner and the flavour was hot and spicy. It's difficult to judge garlic flavours on a single tasting because they vary so much with different growing conditions and harvest times, and even then they can change continually during storage. When eaten soon after harvest my Persian Star had a slight coarseness in its flavour, but it was probably harvested prematurely so I will allow the rest of the crop to mellow in storage for a while and see how it develops. 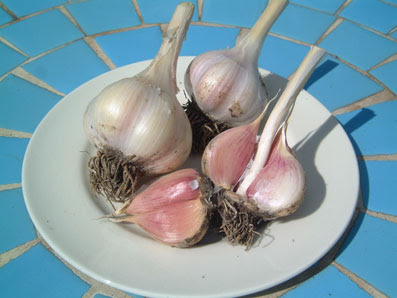 Still my favourite garlic at the moment, Music is a handsome and reliable variety with a wonderful rich flavour.

And no it's not just the name that made this one appeal to me! This is my third crop of Music from home-saved bulbs, and although it's not the most brilliant harvest because of the atrocious weather, it's proving itself to be a very sturdy and reliable variety. It seems to have originated in Italy and then developed in Canada, and it's a hardneck Porcelain type. The cloves are huge and plump with pretty pink-violet skins, and the outer bulb wrappers are smooth, porcelain-translucent and usually streaked with silvery purple. The flavour is fantastic, and this is the variety all my friends pester me for. It does change in storage though ... I harvested a bulb in June and we ate half of it and it was very nice. Last Sunday we ate the other half and it nearly blew our heads off. It had developed an intense heat during its time on the kitchen shelf, though it still maintained its sweet musky Music flavour.

On the whole the Music bulbs this year are smaller than they should be and less elegant and porcelain-like. They are also producing some small extra cloves within some of the bulbs, which they have never done before. So I think they have been a bit perturbed by the weather. I often find that smaller bulbs taste better than big ones though, so I'm not too bothered.

One disadvantage of Porcelain garlics is that they don't usually store for more than a few months. However, I'm amazed to say I have a single clove of Music on my kitchen shelf which is now one year old and still firm and healthy! I haven't the heart to eat it now, and as it has a fine and healthy set of root buds I will probably try replanting it in the autumn. There is probably a good reason for its long life ... with garlic there is a trade-off between scape removal and bulb storage life. If you remove the scapes (flower stalks) you get bigger bulbs but they don't last as long. With last year's crop I left some of the scapes on until they were almost mature, which compromises bulb size but gives them much better storage properties. 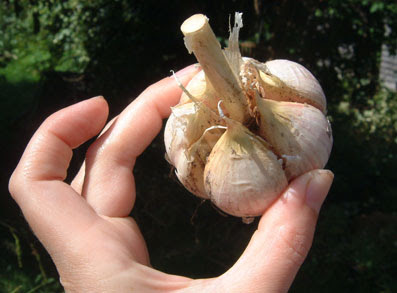 Oops! This is what happens when you leave garlic in the ground too long! They burst out of their bulb wrappers. This year I'm blaming it partly on the extreme wet weather through June and July, which made the cloves swell very rapidly and push each other apart, though in doing so they've reached a much more impressive size. Bulbs in this condition will not store for too long but that's OK ... I will use these for replanting, since they are literally bursting with vitality!
Posted by Rebsie Fairholm at 3:22 pm

I think I overeacted in harvesting all my garlic once rust struck in early June - just didn't think they would keep on growing.

That's really interesting about the Solent Wight resisting the rust!

In all my varieties I noticed the silverskin varieties had a slightly lighter colored green leaves than the other varieties, and they seem to be ever so slightly resistant to the rust. In addition, all the varieties that grew big and strong resisted the rust longer because they had more foliage to begin with.

I wouldn't say I saw anything that was resisting the rust in any meaningful way.

My Persian Star was also pure white at harvest time. I don't remember what happened last year, but I assume the colors will appear shortly.

I gave a bulb of Persian Star fresh as a gift to someone this year, and I was holding it out to them trying to explain that it really was a very pretty and colorful garlic, even though at that moment it was white. They had a very puzzled look on their face...

Thanks for rhe picture of the Spagna Bianco beans. I shall try them next year, and those dog beans look very interesting, though a quick Google hasn't come up with anything.
Have you thought of trying any true Lima beans? This year hasn't been a year for beans for drying - I'll try some of the bush Limas in the greenhouse next year

Hi Rebsie,
Just had my first Black Krim tomato. Excellent taste! Would you like to do a swap for your Black Plum? I also have Roma and Rio Grande both plum types.
Taking all my seeds your way, on to paper!
I have a purple bean but not sure if it is edible, thought that you might be interested but how do I get the picture to you?

John - well, I didn't know any better. It was a gamble. I might easily have lost the lot.

It's useful to experiment and to compare notes, which is one of the great things about blogging!

Patrick - the clove skins on my Persian Star have now developed strong purple stripes after a couple of weeks just sitting on the kitchen shelf, along with a dynamite-like explosion of hotness. This is what makes garlic so elusive to review ... the colours and flavours are changing constantly, even after harvest.

Clive - I haven't tried true Lima beans as I've always understood them to be too tender for the UK climate and I don't have a greenhouse. Maybe that's a good reason to grow them anyway!

The Dog beans I got from Patrick (above) and I too failed to find any information about them on the net! They are probably not available commercially. More Spagna Bianco pics to follow!

Phreddy - yes, I will be happy to swap Black Krim for Black Plum. That's one of the varieties I've had my eye on but haven't tried yet.

It should be OK to email a picture and I will try to remember to check the email!!