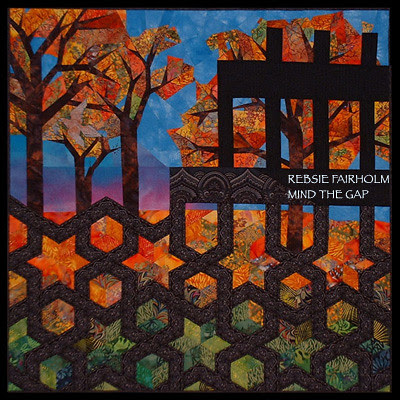 Or if you just want to have a listen out of curiosity there are some song samples on my website, www.rebsiefairholm.co.uk.
Posted by Rebsie Fairholm at 2:53 pm

Well done with the CD release - the artwork is very striking too.

I'm with you on powertools and don't own a powered hedge trimmer, strimmer or leafblower.
I like some peace when I'm gardening and a chance to see the wildlife and seedlings.

That is a really great cover. My mom would love it, she makes quilts and this is right up her ally. I just found you on MySpace and love your music and your garden.
I have a small garden myself here in the humid hot USA, in Iowa right in the middle. My garden isn't doing so well this year. Thanks for the great blog and information.

Celia - I quite agree about the peace and quiet ... I like to commune with the plants and earth rather than hack them up with powertools. Sometimes machines are necessary, but not leafblowers ... they are just an incredibly wasteful means of moving debris from one place to another. In our street lots of people use them to blow rubbish out of their driveways and onto the street, so that the council has to come round and clear it up. Shameful!

Ashley - thanks for your lovely comment! The cover artwork is a quilt by Jeri Riggs from New York (www.jeririggs.com) ... I think it is beautiful and deeply evocative and I'm very happy that she let me use it.

I think most people across the world have been struggling with the weather this year, at one extreme or the other.

Hi Rebsie, congrats on the cd release! I'll have to have a look when I come to UK next (love the samples on your website). Love the name too, I took my husband to London earlier this year and now any time he hears the word gap, he masters his best voice and calls out 'Mind the gap!'
How's the water situation now?

Thanks Sarah! One reason I called it Mind The Gap was so I could have free advertising in London tube stations all day every day! :)

The water came back on after 8 days but we still have to boil it for drinking and it stinks of chlorine!

... are you an Archers fan? (no you don't have to admit it in public!) but Tim Bentinck aka David Archer is the voice of "Mind the gap!" on the Piccadilly Line.

Really? Haha, I didn't know that.

I used to listen to the Archers in the late 80s when I lived in a farm cottage. But only because the walls were so old and rotten I could hear it blaring through from the cottage next door and thought I might as well put it on myself.

Rebsie, is it better for you if I get the cd direct from you - otherwise I'll go via Lost Records.

It doesn't really matter either way because the Lost Records pay their artists fairly. The postage would probably cost less direct from me, but I haven't actually got the stock yet! It should be arriving any day now.