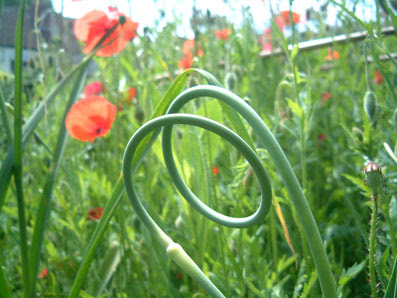 Among poppies I collected from the trenches of the Somme, a flower scape on Music garlic swerves out of a double loop-the-loop.

I don't pretend to be a garlic connoisseur in the same league as Patrick, but I have been taking an interest in this love-it-or-hate-it plant in the last couple of years and have discovered a whole new perspective on it.

Growing up in England in the 70s and 80s, garlic was something I didn't really come across much. You could get it in powdered form to use as a seasoning in cooking, but fresh bulbs were rarely seen except in specialist shops. It was only in my early 20s after I went vegetarian and was looking for new foods to try that I discovered how fantastic fresh garlic tasted (and never touched the dried stuff again). By then you could buy it in supermarkets, but it took another few years to start showing up in garden centres. And when it did, it was usually just called "garlic". No variety name was given, so I assumed there weren't really any varieties.

Oh but there are!

A browse through Patrick's blog will give you a modest idea of some of the varieties out there. But what if you want to grow some yourself? You won't find most of these named varieties for sale anywhere in Europe. Even in the US where there's a better choice, supplies are limited and prices high. If you want to buy garlic in the UK to grow yourself you will have a very limited choice. There's Thermidrome and Printanor (how do they get these names?) and if you venture out on the internet you'll find a couple of companies offering Solent Wight and its variants Early and Purple Wight. Another Scottish firm offers Music. That's about it. Where is the Georgian Crystal? The China Rose? The Persian Star? The Gypsy Red?

I assume the reason the available garlic range is so small is because of a perceived lack of demand. After all, most people in the UK still think garlic is just garlic. 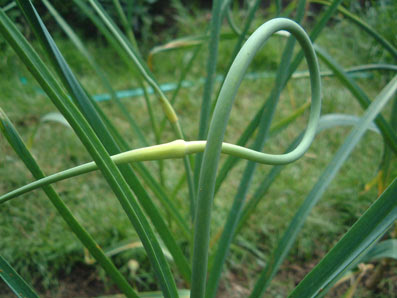 The first time I grew garlic I simply planted some supermarket cloves that had started to sprout. That was when I had an allotment and an Italian bloke down there said I should try it because it's so easy ... "you just tttthrow it on the ground and it-a-grow." It did too. I've been growing it ever since. But what I didn't know back then is that there are (broadly speaking) two different types. These are usually called hardnecks and softnecks.

The difference between them is quite fundamental, because they reproduce differently, and have different culinary properties.

Softnecks don't tend to flower, and if they do the flowers are insignificant. Instead they produce big bulbs with large numbers of cloves (usually 12 - 20 but sometimes up to 40) of varying sizes. After harvest their tops remain very pliant, which enables them to be woven into braids.

Hardnecks produce a tall central flower spike, called a scape, which grows with a curious twist in it and eventually dries out to form a hard woody stalk ... hence the name. They don't produce proper flowers, however. The scapes contain bulbils ... numerous tiny cloves. Bulbils can be planted and will eventually grow into full sized bulbs, but it takes a few years. The usual practice is to remove the scape before it develops too far, otherwise it uses up too much of the plant's energy at the expense of the bulb. The bulbs themselves tend to have fewer cloves in them than softnecks, usually between 2 and 8, although they may be very large in size.

There's also an important difference in flavour and keeping qualities. Hardneck garlic often has a richer mellower flavour and is considered to be of gourmet quality, but it usually only keeps for a few months. Softneck garlic keeps for up to a year, but the flavour is often more pungent and less refined. Hardneck cloves are generally much easier to peel than softnecks.

Supermarket garlic is almost always of the softneck type, which is probably why most people don't realise there's more than one type. The reason softnecks are so popular is because they're much more commercially viable. They are higher yielding, easier to grow by mechanised methods, and their keeping qualities give them a much longer shelf life. Also, because the bulbs have lots of cloves in, the planting stock goes further. They are simply more productive and profitable, so most farmers go for them. One exception is the superb hardneck Music which is sold by Waitrose, but it has a very short season.

For me personally though, hardnecks are the ones to go for. The superior flavour makes them well worth seeking out. I have some Persian Star which Patrick gave me and that's doing well. And for a few years now I've been growing Music, which I guess is an obvious one for me to go for. Within the realms of hardneck garlic there are several sub-types, and Music is a Porcelain type. It's easy to see why when you look at it. The bulb wrappers are silky smooth and translucent with fine elegant purple stripes and are truly beautiful things to behold. Inside are approximately four humungously fat cloves which are gorgeously aromatic and very easy to peel. 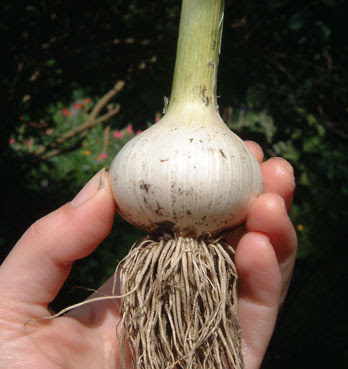 I've just harvested this one bulb of Music because the plant was suffering an extreme infestation of rust. The bulb is in perfect condition, and pretty large considering it's been harvested more than a month early. It hasn't yet developed its purple stripes or porcelain glow, however.

Last year I gave away a few bulbs to friends and to the lady who runs our local Chinese takeaway. Since then I've been harassed incessantly. "Got any more of that garlic? Oh please, just one more bulb!" Unfortunately I can't grow it fast enough to give it to everyone who wants it. It's difficult for me to bulk up my supplies because each bulb only contains four or five cloves at most. They are enormous cloves, but nevertheless at planting time the contents of the bulbs don't go very far. They are also large plants and take up a lot of space. And I want to keep some for myself!

But at least those people I gave it to no longer think that all garlic is just garlic.
Posted by Rebsie Fairholm at 5:47 pm

Thanks for a great post! In South Africa we're still at the stage where there's "just Garlic". I'm presently growing next year's supply which is, like your initial plantings, "supermarket supply" -- a softneck variety with a beutiful pink/purple tinge.

I also have a hardneck type simply known as "Elephant Garlic" locally. It is very nice, but, as you point out, quite low productivity; I only get 3 or 4 cloves per bulb, so saving planting material for next year, or merely bulking-up the supply, is quite a challenge!

Given the difficulties in moving live plant material across national boundaries, I had more-or-less resolved that Garlic is something I would much like to spend time on breeding my own varieties -- probably mostly by selection, so it'll be a sloooow process, but what else is time for?

I wonder if people think it's some exotic 'foreign smelly muck' when in fact it's dead easy to grow and does pretty well in our climate.

Thanks Mike ... it's fascinating to hear about your garlic experiences and I look forward to hearing how you get on with developing your own. As you say, selection is probably the only viable option since garlic doesn't reproduce by seed. Much patience needed!

John - I think you're right, there's a perception that it's an exotic crop which doesn't do well in the UK when actually it's a doddle. And when I offered some to my (rather conservative) neighbour he said "oh no, me an' the wife don't eat none of that sort of stuff..."

I am so inspired to grow garlic next year! Thanks so much for the beautiful photos.

Thank you Mimi! It's a great joy for me when my posts inspire others to grow something.

Owing to devoted experts, we have been competent to present a wide range of Potato Powder. SMF International is Potato Powder Wholesaler in Indore.