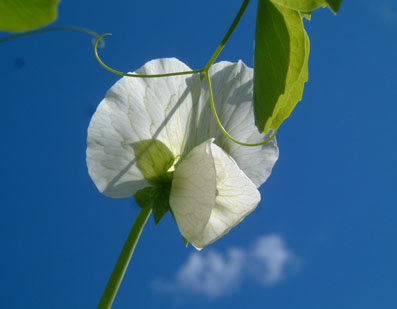 The weather has become very hot, very quickly this year, and that's not an ideal situation for peas. They are cool season plants, and prolonged periods of hot sun makes them very stressed. Their initial response is to start producing much smaller flowers, and if they're some way into their season they may stop flowering altogether, producing only tiny buds which wither before opening. In my garden, Golden Sweet, Desiree and Ne Plus Ultra have stopped flowering, and the rest are slowing right down. 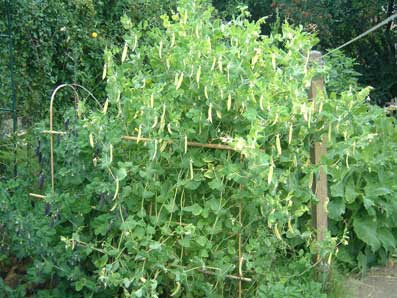 You can see how rampant Golden Sweet is (on the right) beside the barely visible purple podded Desiree (on the left). Six feet tall and absolutely smothered with golden pods.

But that's not the end of the pea lover's woes. Stressed peas tend to get attacked by aphids. Aphids need no introduction because everybody knows what they are and why they're such a nuisance. As my friend Roz put it: "they don't even have to have sex, they just land on a plant and ten minutes later they've had, like, a million babies."

Aphids don't tend to attack peas as badly as they do some other plants (like roses, ack!) but they have a habit of tucking themselves away under the sepals of developing pods where you don't see them until you wonder why the pod is starting to twist and distort. If you catch them early enough it's easy enough to brush them off and only when the plants are very stressed do they build up to really problematic levels. I wonder also whether they're responsible for infecting some of my plants with an as-yet-unidentified disease which causes severe curling, stunting and rapid death. Pests and diseases are not one of my areas of expertise so although I've had it before I don't recognise it. I've tried searching on the internet to find out what it is but all the photos of pea diseases I come across are so low-res you can't see what the bloody hell they're trying to show (so what is the bloody point, I ask?)

This year I've had an additional problem with snails attacking my peas. Anything I tried to sow direct into the garden got eaten the moment it put its head above ground. Even the ones I started off in bog roll tubes or Rootrainers have been savaged. I've lost one of my sideline breeding projects, a Champion of England x Mr Bethell's Purple Podded cross I made last year ... the plants reached 5ft tall and produced some very attractive purple and green two-tone pods before being completely skeletonised by snails. They even chewed lumps out of the pods which ruined the baby peas inside. As it was only a sideline project I didn't have many seeds, so that's the end of that. I also lost an entire crop of Ezethas Krombek Blauwschok purple peas, stripped bare by snails, but at least those are readily replaceable. The snails also destroyed most of my crop of Mr Bethell's Purple Podded at the seedling stage, and although the surviving plants are making a valiant comeback the crop is a shadow of what I had last year. 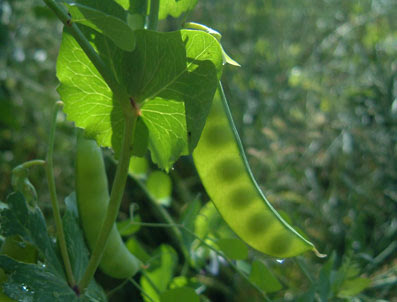 In fact my vegetable plots look like a pest and disease resource centre at the moment. I don't know why everything has been so badly afflicted this year when none of these things were an issue last year, but there you go. I have mangold fly on my beetroot, rust and leek moth grubs on my garlic, asparagus beetles on my asparagus, blackleg on some of the potatoes and my sweetcorn seedlings went mouldy. Strangely enough though, my broad beans are totally free of blackfly ... even the Martock variety which is said to be "a martyr to blackfly" is clean as a whistle. Weird.

But enough of all this doom and gloom. As you can see in these photos, most of my pea crops have been pretty successful so far despite all the problems.

The last of the heritage peas to come into flower this year is Magnum Bonum. It's another tall, vigorous 19th century variety quite similar to Alderman and Ne Plus Ultra, thought to have been introduced somewhere around 1860. 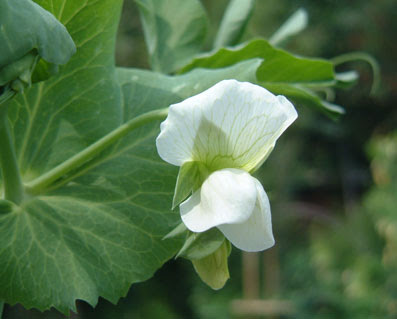 And meanwhile other varieties have been setting pods like the clappers. I've had the pleasure of sampling Ne Plus Ultra which is mega-sweet and very tasty with long beauteous pods. I did try eating one of the pods at the mangetout stage but it was rather bitter ... this one is definitely a sheller. The pods puff out to quite a substantial size and the peas are quite large. I will be reviewing this variety soon, so I won't go into too much detail now. 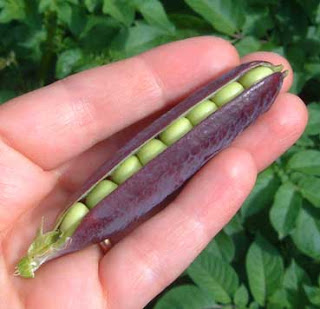 Also up for review very shortly is Carruthers' Purple Podded, and I must say I think I've found a new favourite among the purples! This one has shown itself to be superior on every level, from its rampant growth to its gorgeous flowers to its exquisitely flavoured peas. I tried eating a whole raw young pod a couple of weeks ago and it wasn't bad, but again this variety comes into its own when you shell out the mature peas. Even when they reach full size they have a sweetness I've never yet encountered in a purple. Just magic. I will be growing this one again for sure.
Posted by Rebsie Fairholm at 4:20 pm

Yes indeed ... the Victorians liked their worthy-sounding Latin names. Desiree is another variety name shared by peas and potatoes.