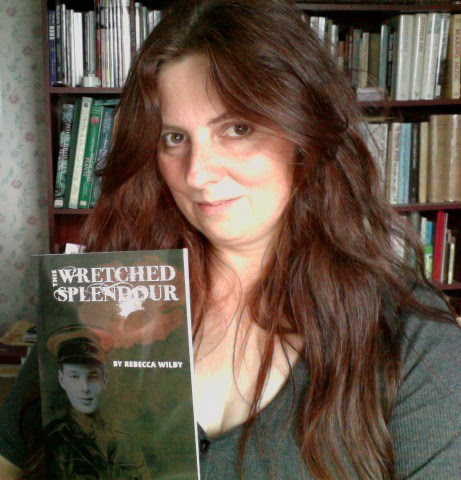 My apologies for being a bit quiet the last couple of weeks. I've just been ripening the fruits of another big project.

I've been running a small record label with Daniel, my music partner, for a couple of years and while it isn't hugely lucrative we do find it rewarding. The long-held dream, however, was always to found a small literary press. It might seem like a bit of an ambitious thing to do, but I have a publishing background and it was always my intention to make use of it. I originally worked as a typesetter in my teens, in the pre-computer age when they had phototypesetting machines whose output had to be processed in a photographic darkroom (I think that's how I became a singer, because I'm scared of the dark and used to sing all the time in there to take my mind off it). Different fonts were kept on strips of film, so when you wanted to use another font you had to open the machine and attach the appropriate filmstrip around a drum inside which had all the delicacy and charm of a piece of agricultural equipment and would nearly have your fingers off. The typesetting process made the most unbelievable noise, like a load of baked bean tins rattling around in the bottom of a metal dustbin. Once developed in the darkroom, the sheet of text had to be coated with sticky wax on the back and then cut up and arranged into a page layout by hand. If anything was cocked up, you had to start all over again. Mercifully I was rescued by a job with a major educational publisher, the one now known as Nelson Thornes, where I trained in book production (i.e. tut-tutting over other people's typesetting instead of doing it myself) and later moved on to be a graphic designer and editor, both of which I loved. When I got fed up with working for the buggers I went freelance. It's all done on Macs now of course but with the cumbersome clatter of typesetting machines still jangling my memory after 20 years, I always regard Adobe InDesign software with goggle-eyed wonder. Still can't quite believe it will let me change typefaces without snapping my fingers off.

So now Skylight Press has come into being, and after all these years of designing and editing books for other people I have one of my own. At some stage there will be Daughter of the Soil plant breeding books, but don't hold your breath on those because I haven't written them yet. The first masterpiece to roll off the press is This Wretched Splendour, a stageplay about the First World War which I wrote in my 20s. And of course there's a story behind that too.

I walked the Somme battlefields in 1996, primarily on the trail of Wilfred Owen, who is a special favourite poet. It was an experience which affected me very deeply. Everyone has seen photos of the cemeteries with rows and rows of white slabs, but until you go out there and see them for yourself you really have no concept of the scale of it. I spent a week out there picking up buttons and bullets in fields, putting my fingers into the carved names of the missing, the tens of thousands of people who were simply blasted out of existence. I collected poppy seeds from old trenches and stood on the edge of the Sambre à l'Oise canal where Wilfred Owen was gunned down. The night after attending Owen's grave I had some very deep and strange visionary dreams. In the following days and weeks they began to crystallise into ideas for a play. I was heavily involved in theatre at the time, so I was confident I knew how to write for the stage. It turned into a full length play about a group of bored and demoralised British soldiers in a front line trench whose lives are transformed by the arrival of a new officer, who uses his sense of humour to deal with the tragedies of the war and inspires them to face their fate with a new stoicism. I gave my newly finished script to a director at the Cheltenham Playhouse, who loved it and managed to get a theatre company down there to sponsor a full production. And a marvellous production it was too, which still brings happy memories to all concerned.

I also decided to try my luck further afield, so I sent out 30 scripts to major theatre companies and producers. 29 were rejected or ignored (I have a personally signed rejection letter from Alan Ayckbourn, yay!) but one London producer phoned up and said "this is brilliant, I've got a director lined up and we're staging it in February". And then things went a bit mad for a while. The play was put on at the Grace Theatre in Battersea. Susan Hampshire came to see it (she was so radiantly beautiful I'm sure she must glow in the dark) and came over afterwards to say hello and told me how she felt the best war drama is written by women because we have more empathy for its human aspects. Michael Billington from The Guardian came to see it - and wrote a spectacularly glittering review. That caught the eye of the top London literary agents who all started ringing the theatre wanting to "have lunch" with me. And at this point I kind of freaked out. I was still quite young at the time and I'm a shy and reclusive person, and all the attention just terrified me. I was frightened of the agents and didn't follow them up. And within a few weeks I found my celebrity status had evaporated as suddenly as it started. The play was forgotten and I came out of the experience with a three-year writer's block. 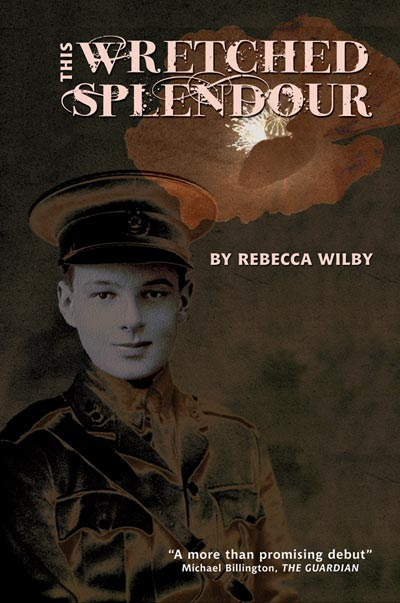 So anyway, now that the time has come to launch our small publishing venture, it seemed like a good idea to resurrect the play which has sat in my bottom drawer for 12 years. It still reads pretty well, and I've done a cover design for it which features one of the Somme poppies from my garden (though much Photoshopped). I decided to release it under my maiden name of Rebecca Wilby since that's what it was originally performed under. Should anyone be curious enough to want a copy, it's currently available direct from the printer for £8.25 (or $11.89 in the USA). I think they charge about £2.99 for postage as well, but for those who don't mind reading things on screen it's also available as a download, which is cheaper. At some point soon it will be available "from all good bookshops" as they say, but it may take two or three months yet for it to navigate the murky bowels of the global bibliographic databases.

But fear not, amid all this excitement I am still pollinating potatoes and staring at peas.
Posted by Rebsie Fairholm at 4:15 pm

Hi Rebsie. Well done! You are a natural-born communicator and I'm sure the book will do well. My other half is interested in WW1 so I shall buy it for him for Christmas (ssh, don't tell him!)It's not often we both read the same author.

The very best of luck, Dilly

Wow! That's fabulous! :)
I always find it absolutely amazing and so compelling when finding out about people - people have so much more to them than you ever see. Congratulations on the fruition of your new project!
(Oh please do get to work on the gardening books - I'm frothing at the mouth in anticipation already! When you get a minute that is...)

Fabulous story, and good luck with the press. And though it pains me to say so, as one editor to another, there's a wee typo (just the one I saw). Or maybe, thinking about it, it isn't. If it is deliberate, it is quite clever, but I don't reckon it'll catch on. :)

Well done - what a fantastic project. People are like icebergs. You usually only see the top 10%. Fascinating to see a bit deeper!

I was a photographic technician for the first 13 years of my working life Rebsie, and I can assure you everyone sings in their darkroom, be they ever so brave or timid. Or just to fight the boredom. Joni Mitchell, Suzanna Vega, Bruce Springsteen or U2 were most often my weapons of choice LOL!

Dulce et Decorum Est to publish your own story

I've always felt poor Wilfred was really unlucky to get killed so close to the end of the war. I wonder what he might have gone on to do had he survived.

@Nellie - you haven't been bitten by a rabid dog have you?

Not the same materpiece as This Wretched Splendour by Rebecca Mazonowicz is it?

Ah ... got it Jeremy, thank you. No it wasn't deliberate. I'm not that clever.

Owen - yes it is the same materpiece - one of the productions went out under that name, which I felt pressured into at the time for complex and tedious reasons and afterwards regretted.

Thank you for the support everyone, it's greatly appreciated. Andy - I perfected the entire All About Eve back catalogue in that darkroom.

Like Wilfred, you should be commended for your gallantry. Good luck with this and all your other projects and I hope it generates the kind of interest you desire.

Looks great Rebsie! I hope it all goes well.

I was never employed in the trade, but as a teenager I also worked with offset lithography presses and photographic printing plates for a few years in school. I also spent many hours in a darkroom chasing down those small scratches or bits of dust that caused so much grief, trying to get it all perfect.

That technology seems a long way away by now doesn't it?

Communication with nature, provides you also a second level of communication and relaxation at the same time. I bealive its a special thing to walk on woods and understand and fell the story of trees.

You are as always an inspiration