Now this is good customer service ... 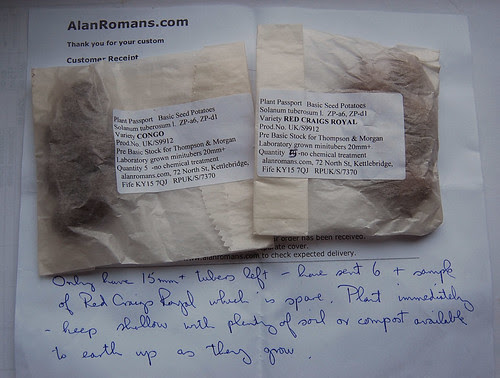 Always looking to explore unusual heritage varieties and seek out material for breeding experiments, I was pleased to see that AlanRomans.com were stocking minitubers (that is, small laboratory-grown seed potatoes) of an old and hard to find blue potato called Congo. I'm interested in Congo because it's blue-fleshed - blue all the way through - and I have a strong interest in vegetables that bear this colour pigment because of its nutritional benefits as well as its glorious beauty. As well as being historically interesting and quirky, Congo has a reputation for being a good berry setter. That would make it an excellent variety to experiment with in breeding work, because it would ensure a good supply of TPS. I could have some real fun crossing it with other varieties, but also growing out its own self-pollinated TPS, which would in itself yield some interesting segregation for different traits (if you've read my article about TPS below, you'll know that the tetraploid arrangement of the potato genome gives it something of the nature of a genetic fruit machine).

So I ordered a pack of five Congo minitubers - not the kind of quantity that would give a good yield for the dinner table, but plenty enough to get the variety established in my garden and see what it has to offer. When my order arrived a couple of days later it contained not one minituber pack but two. The handwritten note explained that they only had 15mm-ish tubers left in stock rather than the 20mm-ish ones they preferred to supply, and so they sent me 6 rather than the 5 I ordered. Additionally, they sent me a pack of 5 minitubers of another rare and special variety, Red Craigs Royal, as a freebie. The Red Craigs Royal tubers had already started to chit and were at a stage where they really needed to be planted. This is really good customer service - it's a great way to keep people like me happy, because I get to add another precious heritage spud to my inventory and ensures that I will want to order from them again next time, and it shows that their attitude to heritage varieties is well motivated, in that they would rather give unsold stock to a good home.

As far as I'm aware, nobody in the UK is doing more than Alan Romans in conserving and promoting heritage potatoes. You may have seen these varieties making an appearance in Thompson & Morgan's catalogue, and in Waitrose - but all that is down to him. And it's not a simple case of reintroducing them on a whim either ... the laws and regulations relating to the sale of seed potatoes (and culinary ones) are complex and restrictive, and he's had a heck of a lot of bureaucracy to struggle against. It wouldn't be legal to sell field-grown potatoes to gardeners without an expensive process of certification, and minitubers are his latest solution to this obstacle. They are produced in a laboratory environment from disease-free plants held in vitro. Although they are small, they can be grown on and will soon build up a decent yield. The sterile environment in which they're produced may make them a little vulnerable when you plant them in the unfettered ravages of the soil, but they seem to cope and I've managed to grow laboratory-raised plants under organic conditions without too many problems. The bottom line is, if it wasn't for the laboratory process these rare and interesting varieties simply wouldn't be available at all. 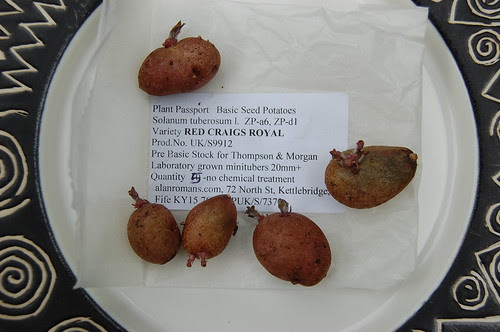 Red Craigs Royal minitubers. The original Craigs Royal was introduced in 1947, bred in Scotland from a cross of Craigs Defiance x Gladstone. This red-skinned sport appeared in Perthshire in 1957 and quickly became extremely popular for its good yields and excellent flavour - only to be plunged into obscurity a few years later as the market moved on to other things. It's a second early type with a floury texture. As for its usefulness in my breeding projects, well, I'm not sure what to expect because the European Cultivated Potato Database lists it as a poor producer of berries but also as having high fertility pollen. 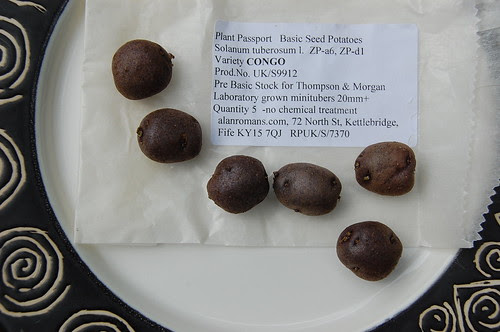 Congo minitubers. They don't look very exciting at the moment, but they are full of potential. There is a degree of confusion over this variety because there are two Congos. This blue-fleshed one is of British origin, thought possibly to have been created by a shepherd in the Scottish borders in the late 19th century. The other Congo is from Sweden and has white flesh (edit - or maybe not!). As if that wasn't confusing enough, there are suggestions that the blue version has many synonyms and may be known around the world as All Blue, British Columbia Blue, Russian Blue, Himalayan Black and McIntosh Black, amongst others - though they may be variants rather than identical clones. Congo is a very late maturing variety - so here's hoping the blight pestilence will be merciful.
Posted by Rebsie Fairholm at 5:24 pm

Alan Romans is a good guy. Mini tubers are an excellent way of building a collection I wouldn't say that they are more susceptible because they have been grown in a sterile environment - it could be that the high humidity conditions that they experience in vitro means that the cuticle on the epidermis is undeveloped, making them more susceptible to desiccation and microbe attack. That said, some strains of Pseudomonas help protect plants from rot fungi. Green tubers (that have been exposed to light) seem to be tougher if my memory serves me correctly. If you can be bothered, starting them off in pots for a few weeks before planting out will allow them to toughen up and get well established.

We have Russian Blue's chitting at the moment and they certainly are blue all the way through! They are also described as "late summer" so could be the same as the Congo from that point of view.

I wish I had the space for more interesting potatoes :) Will be reading your posts with interest!

I have one tuber of Congo, half a dozen of Negresse, and a bed of Vitelotte from the market. Supposedly they're all variations of one variety. Congo and Vitelotte look very much the same, Negresse has rounder tubers. I just hope the blight keeps off this year!

Congo looks superficially like my Amethyst - from last year's TPS. I am looking forward to a full crop of these - so I can tell if they are going to be early or maincrop - hard to tell with a single plant in a bucket last year!

Hi Rebsie, I have some tubers of Negresse to spare. Let me know if you would like a few.

The Swedish clone Congo is not what I would call white inside, have a look:
http://www.mynewsdesk.com/se/pressroom/goteborgs_botaniska_tradgard/image/view/congo-en-helblaa-potatis-10532

It sets a lot of seedy fruits, and segregate as you wish, in color,shape and taste. It has rather deep eyes. I prefer the nutty creamy taste of the young potatoes. By age they become dull and mealy to my taste, but better for blue mashed potatoes.

Enjoy reading your thoughts on your breeding work!

I read something from Tom Wagner - and he was quoting from somewhere else I think - that suggests that a great many of these blue-fleshed varieties are either synonyms or minor variants of each other. But also that it's better to hang onto whatever name each one came with, because they may well represent locally adapted variants which are worth regarding as separate lines. Tom reckons that if you sow TPS from these different varieties they tend to segregate into similar patterns of types, which suggests they have essentially the same pedigree.

Peruvian Purple is one I've heard of but never seen available over here - sounds intriguing.

Toads - I see what you mean! I have never seen the Swedish Congo, I was going by the European Cultivated Potato Database, which said "Primary flesh colour: Cream".

Ian, I would love a few Negresse tubers if you have some to spare.

As Rhizowen said, Alan Romans is a good guy and I am very pleased to discover that minitubers are sorta, kinda taking off for making potato diversity more available, thanks to his perseverance. I grew Red Craigs Royal from ordinary seed potatoes about 12 years, and loved it.

Hi Rebsie, send me your address (get my email from my Blogger profile) and I'll send some tubers. Ian

Window On The Prairie said...

Our potatoes are coming along well. We planted them in March. They'll be ready for harvest in mid summer, and we'll have enough to last all year.