Well it was only a few days ago that I blogged about the likely genetic expression in my Alderman x Salmon-Flowered F1 pea. And already the plants are thumbing their noses at me and proving me wrong.

Let me begin my explanation by showing you a picture of their dad. 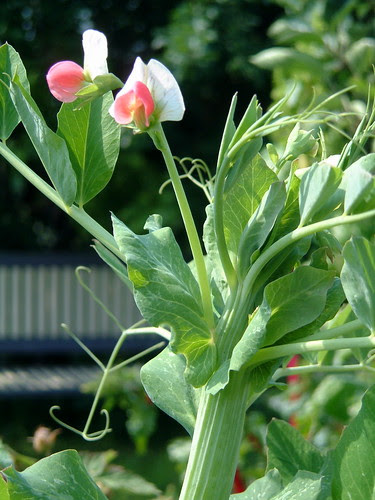 Salmon-Flowered pea growing in my garden in 2007. This is an umbellatum type pea which bears all its flowers in a clump at the top. This happens because the new stems formed at each successive leaf node fuse together and are drawn upwards into a big fat monster stem, for which the technical word is fasciation.

I mentioned that fasciation is caused by a very particular combination of three recessive genes. Because they're recessive, and they need to present themselves all together in order to do their thing, I wasn't expecting to see any sign of fasciation in the F1. I thought they would be masked by the dominant alleles of Alderman. Shows how much I bloody know about it. 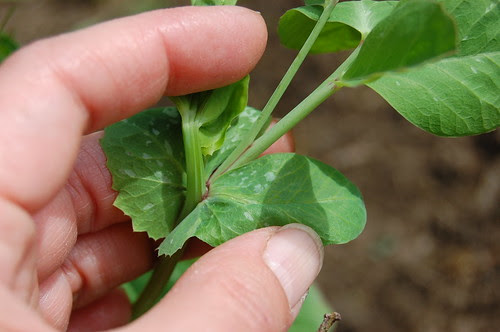 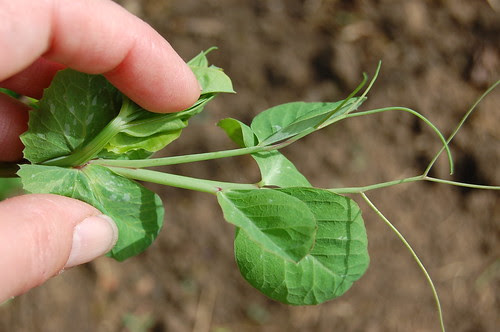 Young Alderman x Salmon-Flowered F1 plant showing early but unmistakable signs of stem fasciation. In other words, it's going to be an umbellatum phenotype with a clumpy flower posy at the top.

I don't know why this is happening - I was expecting the growth habit to be more in keeping with the hybrid's mum, Alderman. Multiple-recessives do have interesting effects, but you see that in the F2 plants, not the F1. What's most odd is that I have some young Salmon-Flowered plants on the go at the moment and they are not yet showing anywhere near as much fasciation as this. Perhaps Alderman has one or more of the recessive fasciation genes hidden unexpressed in its DNA. Perhaps the recessives don't have an equivalent dominant allele and are able to express themselves freely. I haven't got a clue (suggestions welcome) so I'm just speculating. At any rate it's showing itself consistently in all the F1 plants. 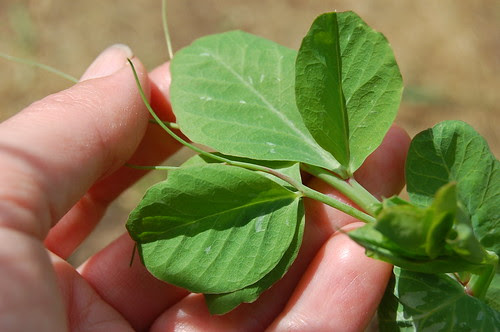 Alderman x Salmon-Flowered F1. The leaf stems have divided and doubled themselves, a feature of umbellatum peas.

Meanwhile though, I'm seeing some leaf aberrations in my other peas too, and those are even more devoid of an explanation. It takes many forms and it's mostly happening among my hybrids, but not exclusively. I've no idea what causes these effects. Cold weather? Virus? Genetic mismatch? Mystical cosmic rays?

Pea leaves usually come in pairs, but here is a gallery of weirdness. 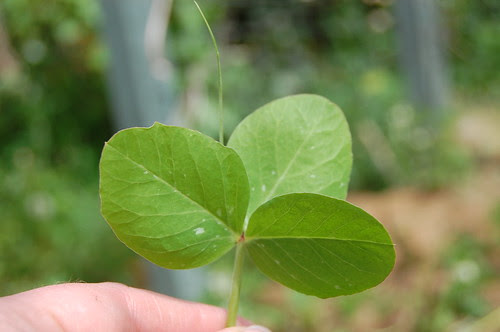 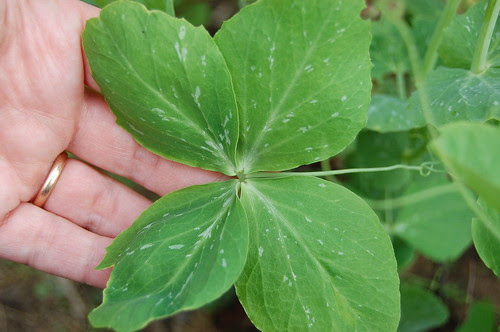 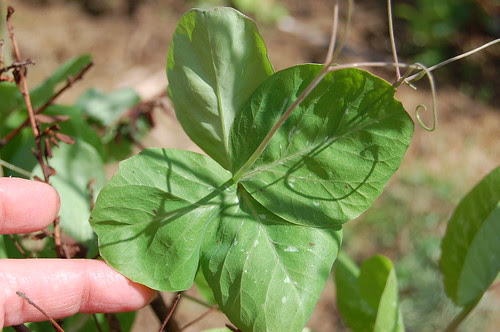 Another quatrefoil. This one is bearing one of its leaves upside down, and has two sets of tendrils, one on each side. Golden Sweet x Carruthers' Purple Podded F2. 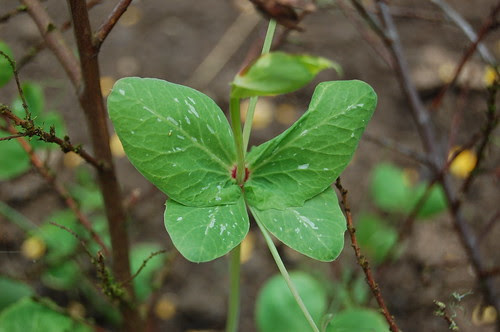 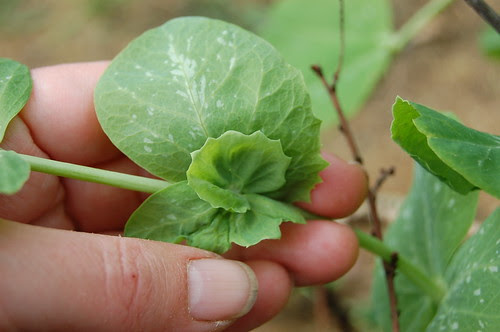 Magnum Bonum x Carruthers' Purple Podded F2. This hybrid is the one that is showing by far the most leaf weirdness, with a number of the plants showing what I can only describe as a "cabbaging" effect … with surplus leaf growth bunching up around the growing tip, and sometimes even terminating the tip in a leaf-and-tendril dead end. But curiously, it is only affecting the plants that were grown from light-coloured (cream or green) seeds. I sowed the dark coloured seeds separately in the same tray and those are all normal. 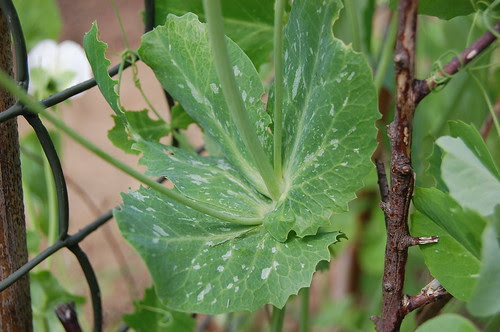 May Queen, an old English variety, with two leaf nodes fused together. Each node has a fully formed pair of leaves and a single flowering stem, but all squashed up together.

At least I haven't suffered any losses (yet) in the recent spell of unseasonal frost, except for a pot of bush basil which 'melted' overnight when the temperature got too low for it. Apart from that, I've been lucky - thanks to Cheltenham's sheltered climate and my garden being hemmed in by trees and houses. Garden pests have been taking their toll though. After an abnormally dry spring which kept the slugs and snails in hibernation for weeks longer than normal, a few days of heavy rain brought them all out and they were ravenously hungry. The Luna Trick F4 crop suffered some quite severe damage, with about a quarter of the plants gnawed down to stumps within 48 hours. The damaged ones will make new shoots, but it will set them back by several weeks. Sluggy bastards. I even had a potato haulm completely devoured in the space of two nights - gone and vanished without trace. The culprits for this damage tend to be either the large brown garden snails or the tiny keel slugs who live in the soil and are barely noticed at the crime scene.

The other garden pest damaging my peas at the moment is a ginger cat with a big arse. It's a funny thing about cat social mentality - he wants attention and doesn't care whether it's positive or negative as long as he's getting it. He enjoys cuddles but is really just as happy when I'm yelling and chasing him off with a broom. Since he discovered he can get lots of noises and arm-waving from me by crashing over onto my pea seedlings, he's taken to doing it repeatedly. And the more I go "aaaargh!" the more he does it. I'm trying to reverse-condition him by walking away and ignoring him, but it's easier said than done … when someone slaps their capacious backside down on baby F4 plants that represent four years' breeding work, sometimes you just have to leap around and shout. 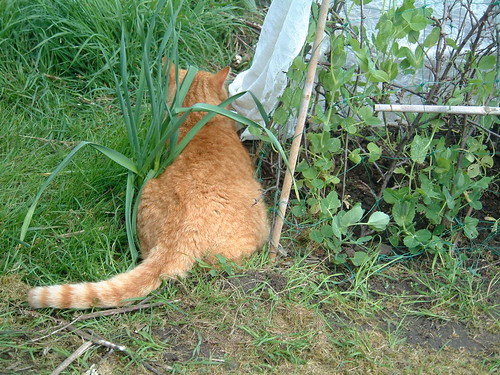 The Arse of Doom
Posted by Rebsie Fairholm at 11:56 pm

LOL! I shouldn't laugh really, but it's funny to see you fall victim to yet another cat/human behavioural experiment! Seriously though, a fascinating display of leaf variation.

No idea about the resons for your leaf wierdness. I've had none, and have had really cold growing condisions so it's not likely to be weather. You're not on a ley line are you? (muffled snigger!)

As to the Alderman/Salmon mystery - well, it just goes to show that the best way to find out what will happen is to go and do it. Suck it and see!

So that's where my Ginger studio assistant goes when I can't find him!

Ooops! no, my cat has a truncated tail... same bit fat ginger bum though, and we have lots of pea plants to squash.

I can't get rid of 'Fasciating Rhythm' - tune keeps running through my head.
Gets coat.

Buy the biggest, cheapest bag you can find from local ethnic market and sprinkle it on the soil. Won't hurt the furry little b*gger but will certainly make him sneeze and move somewhere else (obviously replace once it rains).

BTW, are you using different compost for some plants and not others? Watched last week's Beechgrove Garden last night, they're doing a peat-free trial this year and one of the composts [they wouldn't say which one] has produced some ~really~ stunted and weird growth.

I know you're not north of the border, but if you have Sky you can record it from BBC Scotland, somewhere around channels 970/971? Does not talk down to you like a certain Friday night programme might .....

PS: Beechgrove is usually shown around 7.30 on a Wednesday but they've been messing with the schedules recently

That was both truly interesting and incredibly funny, arse of doom!!LOL:D
Those leaf formations are weird, you have lost me on the F1 & F2's had to read it again!!!
Great Blog.

I'd suggest getting a big patch of catnip planted somewhere out of the way. The rotund rumped rascal may be less troublesome when stoned.

Great post! Very interesting as usual. The Arse of Doom - I love it :-)

I have seen these patterns on my peas as well, last year, nothing this year, and last year was a cool year in my area. This year has been quite warm for the season and those odd patterns aren't there. I don't know if they are related to hot/cold but have noticed the exact same thing. Didnt affect my appetite for them, thats for sure..

interesting blog and last few paras on the arse of doom were priceless :D

I've planted some salmon peas this year, Celia at PPPs sent me some. Growing really well up an 8ft arch!