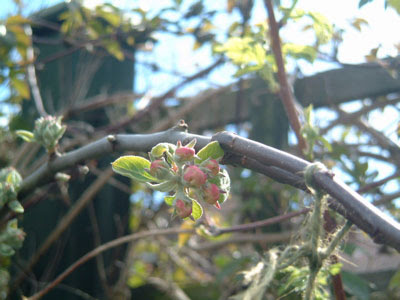 I posted about my Gloucestershire apple trees in the very early days of this blog but as I hardly had any readers back then I don't expect anyone to remember. So this is the story of my Tewkesbury Baron apple.

At one time Gloucestershire was one of England's primary apple-growing areas (not surprisingly, as it's joined to Somerset at one end and Worcestershire and Herefordshire at the other) but three quarters of the county's orchards have been lost since the 1950s. Fortunately the hard working Gloucestershire Orchard Group have identified, saved and propagated a large number of the survivors and are helping people to reestablish orchards in the area. They have a beautiful database of local heritage varieties which revel in such names as Black Tanker, Foxwhelp and Hen's Turds. I'm sure Bastard Underleaf would have a welcome home in my garden if I had more space, but sadly it's believed to be extinct. Fortunately though many of these trees are now available to buy, albeit from only one or two specialist suppliers such as the one I got mine from, Lodge Farm Trees near Berkeley, Gloucestershire.

A couple of years back I decided to get three heritage apple trees, and to choose the three that were most local to me. Ashmead's Kernal is the localest, originating 300 years ago in the garden of a Dr Ashmead only 7 miles away in Gloucester. The next most local is Tewkesbury Baron, which takes its name from the town of Tewkesbury (pronounced "chucks'bry" around here, not "tyooksburry") about 12 miles away. We used to live there when I was a kid. It used to flood all the time back then too.

Tewkesbury Baron is of uncertain origin but was certainly in existence by 1883. It doesn't get a lot of good press. Its qualities are summed up by the experts at the Brogdale National Collection as (and I quote) "Little flavour." Their online database elaborates on this slightly: "Fruits have a little coarse, dry, white flesh with an insipid flavour." There's not much other info available apart from that, and nobody has anything good to say about it.

I must admit I did wonder if I was a bit mad as I hurtled up the M5 with a tangle of tree branches curled around the inside of the car windscreen ("Whatchoo looking at? Haven't you ever seen a VW Polo with a tree wrapped round its windows before?") A fruit tree is a long-term commitment, it takes up space and its roots will steal nutrients from my vegetable plots. It's important to choose the right one. So why was I being so daft as to give up my precious garden space to a flavourless apple?

My decision was partly sentimental because I used to live in Tewkesbury, and because I wanted to have the most local varieties. But the real clincher was that Tewkesbury Baron is critically endangered. By the criteria of the Gloucestershire Orchard Group that means its population has dwindled to "two sites or fewer". I felt morally obliged to take it on.

I was impressed and inspired by my visit to Lodge Farm Trees. Its proprietor Rob is a great bloke and he's completely passionate about his trees. He loaded them into the car for me and spent a good ten minutes explaining how to prune them and care for them. I also have him to thank for galvanising me into starting this blog. He knows more about apples than I ever will, but when I asked about the flavours and flowering habits of the trees I was buying he shrugged and said "Some of these trees are so rare nobody's grown them for years. So we won't know what they're like until somebody grows them and shares the information." I was really astonished by that because it had never occurred to me before that ordinary gardeners like me can make a really significant contribution to the available knowledge. Instead of being a passive consumer of other people's expertise we can all grow, observe, note, photograph and share information, especially now, in the internet age. I was inspired and set up Daughter of the Soil that very same week. 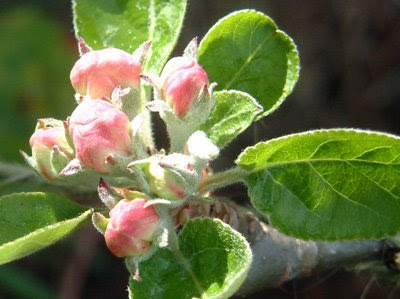 So, that was over two years ago and I can now share some information about Tewkesbury Baron. My tree was certainly keen to produce fruit. I'd read that apple trees can take seven years to start fruiting properly, but my one-year-old tree produced an abundance of flowers within a few weeks of planting and managed to set 12 fruits. For the sake of the tree I picked off 11 of them and just let it produce one, for tasting purposes. The fruits are a deep rosy red where the sun gets to them, green where it doesn't, and lightly speckled. They have a very waxy shiny skin which feels quite distinctive and silky to touch. The wax is so intense it rubs off on your fingers.

But here's the surprise. I gathered the one specimen fruit when it was ripe, and ate it. And I can say, hand on heart, it was absolutely the most gorgeously exquisite apple I've ever tasted. The texture was slightly grainy, but not in a bad way, it was bursting with juice, and the flavour was beautifully poised between sweetness and sharpness. It was equally sweet and sharp at the same time, so tangy it was almost fizzy ... a really rich and complex flavour. The fruit itself also had a beautiful, beautiful scent even before I bit into it. I left it on my desk for a few hours before eating it and it filled the whole room with an exquisite apple aroma.

How this apple ever got labelled as having "little flavour" is totally beyond me. I'm in no position to argue with the pomologists at Brogdale, but I can only assume they based their assessment on some duff fruit. There could be any number of reasons why the specimens they had weren't up to scratch, but anyway I can vouch that in my garden Tewkesbury Baron is wonderful, an absolute treasure and delight.

The blossoms, as you can see from these pictures taken yesterday, are a deep pink and grow in little posies right the way up the trunk of the tree. I'm training mine into a festoon, hence the bits of string in the top photo. When the flowers open they'll be pale pink. 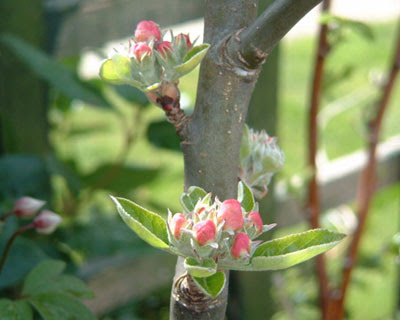 Hurrah for Lodge Farm Trees, rescuing and distributing these endangered varieties. And if you would expect a specialist nursery with lovingly nurtured heritage varieties and personal service from a genuine expert to be more expensive than a garden centre flogging the bog-standard commercial varieties, well it wasn't. The trees were £12 each, which is several quid less than in most garden centres. They were also well developed for their age and in fabulous condition. They'd really responded well to being grown with loving care rather than churned out by a production nursery. For those with less space to spare the nursery was also offering "family trees" where several heritage varieties had been budded onto a single rootstock, producing a tree with different fruit on every branch.

The moral of the story? Don't let anything you read put you off trying stuff.
Posted by Rebsie Fairholm at 1:08 pm

Hurrraaah for the Chucksbury Barons...! (Sounds like an ice hockey teams)

Brogdale is quite a site (and quite a "sight" as well)

Have you ever been?

What an inspirational post! Apple seeds later in the year, maybe? ;)

Nice tale! In reverse manner, if you had only ever eaten home-grown and well grown Golden Delicious, you would wonder why on earth fruit lovers despise the supermarket version.

So, what now? Grafting classes?

A serious apple tree collector friend (he goes around old farm orchards taking slips for grafting) has a local tree called the Hornsea Herring. Sadly, he reports it as flavourless and a poor keeper. Can't win 'em all!

Beautiful, inspirational post. What a wonderful tree, and one I would never have known about had I not read your site. Thank you for being such a great educator.

Greenmantle - how lovely to see you back! You were one of my blog's first readers too. No I haven't ever been to Brogdale. Even though I grew up in Essex I'm ashamed to say I've never been to Kent.

Seahorse - apple seeds are great fun. Because of their eccentric pollination habits all seeds are hybrids, so you never know what you're going to end up with. The ubiquitous Bramley apple originates from a pip which a young woman sowed in her Nottinghamshire garden in about 1809.

Jeremy - I have heard that Golden Delicious can be exactly that, but sadly I've only ever tried the supermarket ones which I find virtually inedible. Grafting is another thing I've never tried!

Veg heaven - indeed, we must be grateful for the work of the fruit fanciers. I don't have room in my garden to do the kind of work they do, so I have to stick with my peas! Hornsea Herring is a great name.

Christina - thank you. 'Inspirational' is always the biggest compliment anyone can give me, it's wonderful to be able to inspire people.