On F2 seedlings and other stuff 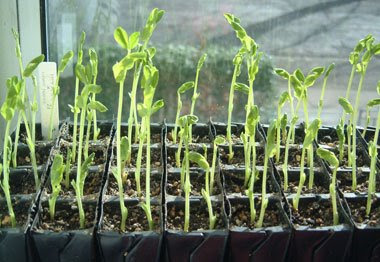 I'm still struggling to keep up with everything (music is going well - four lots of radio airplay this week!) but I wanted to show you how well my F2 seedlings are coming along.

There's lots more going on. I'm hoping to get a greenhouse (what a dream come true that would be!) if I can find someone to put the bloody thing up as I don't fancy wielding large panels of glass above head-height myself. Meanwhile my home-made coldframe collapsed in a storm a couple of nights ago and splatted my crimson-flowered broad beans, which is not surprising given that the frame wasn't actually held together with anything except gravity, flowerpots and force of will. I think the beans are salvagable. And my next door neighbour kindly helped me cement-in a new post at a sensible height for the washing line which runs along one side of the garden, so I no longer have to garotte myself each time I go in and out of the vegetable patch.

I've been caught off guard somewhat by the way my Yellow Sugarsnap F2s have sprung into action. They are actually getting to the size where they'll need to be planted out soon, and I was banking on them taking a little longer so I could leave it till the weather is more reliable. It was also a little unfortunate that having had the sunniest February on record they happened to germinate just as we went into a few days of grey murky weather so when I photographed them on Saturday they were looking a bit leggy. But a few days of sunshine since then have fattened them up nicely. Here's what they look like today: 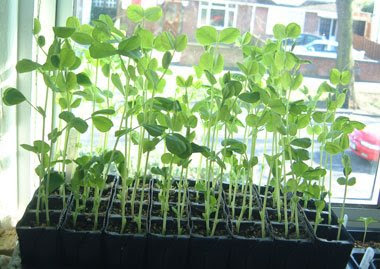 Something I didn't mention in my previous post on the Yellow Sugarsnaps is that I'm also growing small amounts of each of the original varieties, Golden Sweet and Sugar Ann. It's very useful in any breeding project to have the parent varieties as a control group. No matter how well you think you know a variety, there are bound to be some traits showing up in the F2 generation which make you think "which parent did that come from, or is it something completely new?" It's also useful to have plants of the parent varieties flowering at the same time in case I want to do a backcross. Backcrossing involves making a cross between an F2 plant and one of the original parent lines. It's a very useful technique for stablising a potential new variety, and for making the offspring more like one parent than the other. Having said that, it's unlikely that I will want to do any backcrossing with the Yellow Sugarsnaps because the class I'm looking for is a double recessive with one recessive trait coming from each parent. If I backcrossed to Golden Sweet I would probably lose the plump sugarsnap pods and if I backcrossed to Sugar Ann I'd lose the yellow colour. To retain those two recessives I will probably have to keep inbreeding from the F2 and select out any unwanted variability in future generations. That's the plan. But ... it's still worth having the parent varieties on hand, just in case.

It's a lot of fun looking at the F2 seedlings and trying to spot the differences. One difference is immediately obvious. Most of the seedlings are tall and lanky but some are short and chunky instead. There are 12 shorties among my tray of 64 plants ... now that's looking like a Mendelian ratio! And it's one I was expecting, because it's actually the first one Mendel himself spotted. I'm really following in Mendel's footsteps here because Golden Sweet or something incredibly like it was one of the varieties he experimented with and led to him discovering the existence of the ratios which are named after him. In peas, the tall gene is dominant over the short gene, so when you cross a tall pea with a short pea you get a ratio of 3/4 tall to 1/4 short in the F2 generation. My project is a tall x short cross, so in my batch of 64 plants I would expect about sixteen to be short. Twelve is near enough. To be honest 64 plants is quite a small sample size so I'm unlikely to get exact ratios. When Mendel did this he was working with hundreds of plants at a time, so the ratios stood out more clearly. 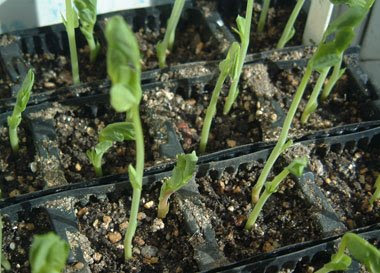 Not easy to photograph a Mendelian ratio, but you get the idea. You may notice one shortie which is a lot redder than the others ... they're all different.

I also mentioned before that sometimes it's the lack of a Mendelian ratio that makes things interesting. One that's surprising me is a complete lack of purple splodges in the leaf axils. I was expecting to see it in around three quarters of them since it's controlled by dominant genes, but none of them are showing it. I have no explanation for that at the moment.

Of course, the Yellow Sugarsnap project is just one of several pea breeding projects I have on the go, and when I get a moment (aaaargh!) I will show you some pictures of the F2 seedlings I'm growing for the Real Seeds Purple Mangetout Project.
Posted by Rebsie Fairholm at 10:55 pm

No toilet rolls this year?

They're all looking great. :)
I need more window space at the moment, everywhere seems covered in potatoes lol

oh good. I've been saving mine all winter to try it this year, and I'd feel a little silly about it if you'd given up on them. :)

Sorry to hear about your accident with the crimson flowered broad beans. I swapped some from PPP, and all are growing nicely except for one which had a close encounter with my dogs foot!

Great update on the F2s. Sorry to hear about the Crimson Flowered Broadies - hope they are indeed salvageable. They do seem resiliant - I planted a couple very early and they got quite badly frosted but bounced back to life very quickly.

I've read enough blogs to know that spamming is a bad idea.

A few of us who live in the city of Chicago are trying to grow heirloom vegetables on our rooftops in cheap homemade earthboxes. In response to huge environmental problems, it's a small but rewarding way to push back. Also, we think they're a great way to build connections in a fragmented social/political landscape.

Not selling anything, I'm giving "it" away.

Here's the , alongside the pics is a little how-to guide with plenty of links.

BTW I planted more peas today including the ones from our seed swap. I'm not in your league of plant breeding but can't resist heritage varieties - 7 this year :) Now where can I fit in all those wigwams!