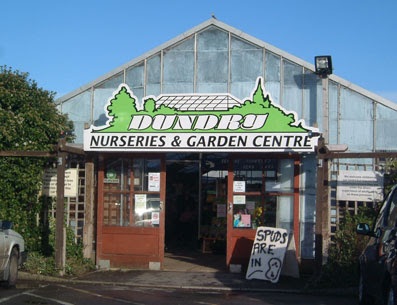 People around here know what goodies to expect when "spuds are in" at Dundry.

I recently read something in the Guardian which made me shudder. A top UK businessman was quoted as saying that British garden centres are "ripe for consolidation". That's right, gardeners are under threat from the same mass-market homogenised blandness that afflicts the nation's High Streets.

Not that that's anything new in itself, there has been a creeping commercialisation of gardening suppliers for some years, and a great many small independent garden centres have been swallowed by large national chains. Some have had no choice, as it gets more and more difficult for small businesses to survive.

It seems to me that it's never been more important to sponsor the independent nurseries and local businesses. You know, those small and slightly weatherbeaten places with hand-painted signs at the roadside, which you often drive past and wonder what they're like but never bother to stop at.

Luckily for me there are lots of small nurseries in my area, a relic of Cheltenham's long history as a centre of plant-raising. Here's one of my most local, in a rural spot a couple of miles outside Cheltenham. Dundry Nurseries and Garden Centre doesn't look especially glamorous from the outside but it's wonderful. I discovered it by accident three years ago when I was out with a friend in the car and we took a wrong turning. As we were turning round in their car park we thought we may as well stop and have a look. And what a pleasant surprise it was. It's a smallish family-run nursery with friendly staff but it's as well-stocked as most of the larger garden centres, and it happens to be the Potato Capital of Gloucestershire. 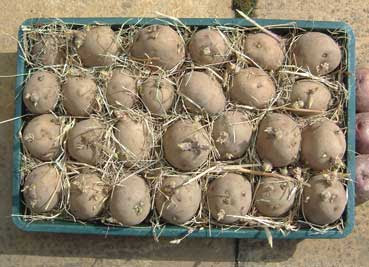 Chitting some Marfona spuds from Dundry.

I'm used to being shown a choice of ten or so varieties of seed potato. But Dundry are potato specialists and I counted no less than 111 varieties on display in their shop. That's pretty incredible by today's standards. And they'll be offering over 150 varieties at the Potato Weekend they have organised for 19th and 20th January. What's even better, they will sell you literally any quantity you want. Rather than being lumbered with a pre-packed 3kg bag you can mix and match smaller quantities of lots of different varieties. And if you just want one or two tubers to try out in a pot, they're quite happy to sell you that. Yesterday I picked up seven tubers of the heritage variety Sharpe's Express for the princely sum of 75p.

They also sell locally grown vegetables and fresh local eggs, which is a great bonus.

So next time you drive past one of those small scruffy roadside nurseries with the whited-out glasshouses, why not stop and have a look? They may not have a kiddies' play area or a tea-shop, but you never know what else you might find.

Any other bloggers want to do a little feature on their favourite local nursery?
Posted by Rebsie Fairholm at 5:40 pm

I couldn't agree more about supporting local nurseries--regardless of where you are. Local buyers understand local needs and requirements--what works and what doesn't. Would the buyers in a big chain, located hundreds of miles away, really know what can grow in my garden?

Great post! This is really an important topic, and many of the smaller family operations have been disappearing around here recently. You're lucky to still have one around.

Supporting local nurseries is very important to me, espicially because my family and I run one. We have a small nursery near charleston South Carolina. The popularity of buying from small family run nurseries is increasing here, but we will always accept more business.
Greg II

Rebsie, you are very lucky to have that resource and to be able to pic n' mix seed potatoes. I'm amazed how tenderly you're chitting those spuds all resting away on a bed of straw! Mind you don't name them or you'll never send them off to planting!

Nice post, and I hope you enjoy Sharpe's Express. It used to be one of my favourites. I totally agree with you about supporting small local businesses, but I am also concerned that some of the pressure against them comes not directly from big garden centre chains but from rules and regulations, not just UK but EU too. Regarding seed potatoes, for example, I wonder what level of certification the varieties you get at Dundry's carry? Is there a possibility that performance will be a bit poorer because they are not quite as disease-free as more common varieties?

What a joy! all those spuds to choose from. I wholeheartedly agree with you about the homogenized garden centres. They are full up with patio furniture these days.

What a lovely idea. I should do that as well. I have a favorite one down the road a ways, off the beaten track. The guy who runs it is so cool, and friendly. We bought our apple trees from there, and I'm so happy with them!

I bought seed potatoes today from a small garden centre near Cambridge - see blog http://purplepoddedpeas.blogspot.com/2008/01/2008-international-year-of-potato.html
I had a chice of 31 varieties - which I think is a pretty good selection, quite a few more than they had last year.