Today in the garden ... purple pods 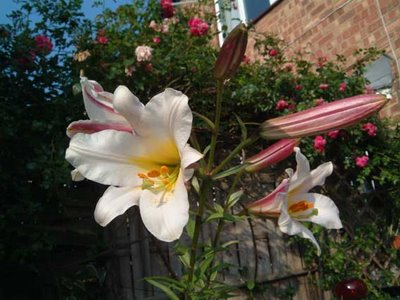 Last night's dinner included some of the Edzell Blue potatoes and red-flowered broad beans. I tried baking the potatoes this time but this obviously isn't one of Edzell Blue's strong points. They have too much dry matter in them and go very floury, and the flavour isn't very inspiring. The skins go extremely crispy and leathery and take a lot of chewing. Some people like their jacket potatoes that way ... but I've had a lot better. When I discover which cooking method does suit this beautiful but fickle spud I'll let you know. The red-flowered broad beans, on the other hand, are the best I've ever tasted. They have slightly smaller beans than the modern varieties I've grown in the past, but they taste fantastic with no bitterness in them at all and only need to be lightly steamed. The plants are more blackfly-resistant than any I've ever grown, which in practice means higher yields. I got my seeds from W Robinson & Son and they may in fact be the only supplier of this variety, although I've also seen it doing the rounds on the HSL seed swap. Highly recommended. 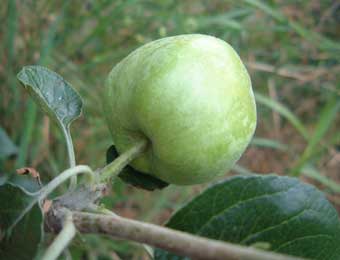 The fruit garden is going like the clappers ... most things are ready to harvest now. I have more raspberries than I can possibly use for anything, mainly because the bushes I inherited as part of the garden are a crappy type which all ripen in one enormous simultaneous glut. The flavour isn't much to write home about either. I'm intending to replace them with Autumn Bliss which is massively better and definitely my raspberry of choice. The only fruit failure so far this year is my miniature peach tree, which has taken umbrage at something and dropped all its fruits in disgust. Bloody temperamental thing. Meanwhile my single solitary apple is swelling nicely. 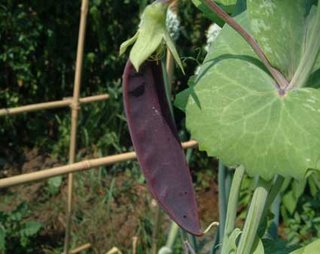 How about that then. Purple podded peas. They start off green when the flower first dies off but within a day of exposure to the sun they go this shiny purple-maroon colour. Another thing I really like about this variety is that the sepals on the flower buds are speckled with maroon, especially while they're in the bud stage. It's very pretty. And with the flowers changing colour all the time I'm wishing I planted it closer to the house where I could stare at it more. Mine bears some of its flowers upsidedown; I'm not sure what that's all about. I'm not finding it to be quite as vigorous as Alderman, but that's hardly surprising. I suspect Alderman has been hybridised with a triffid.

Pollinations done today (it's technically too hot for it, but the others I did the other day seem to have taken all right): 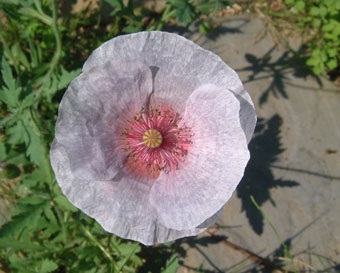 Another nice poppy showed up today ... a lavender-grey one with a pink centre. Once again it's a self-seeded Mother of Pearl.

I thought it was time I posted a picture of one of the vegetable plots, because they look lovely at the moment with everything growing away like mad. But you'll soon see why most of the photographs I post are tightly-cropped close-ups ... it's so you can't see what a scruffbag muddle everything is actually in. I dug this veg bed out of the lawn last year, so this is only its second season. That's my excuse and I'm sticking with it. 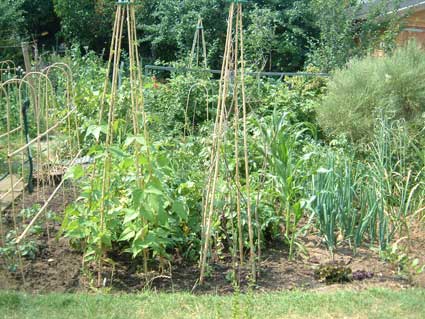 From left to right: tomato Pink Jester; climbing bean Mrs Fortune's (on wigwam); pea Champion of England (on other wigwam); sweetcorn Swift (F1); onion Hysam; garlic Music. There's also some Mascara lettuce and Cheltenham Green Top beetroot in the foreground and Red Duke of York and Fortyfold potatoes behind and God knows what else.
Posted by Rebsie Fairholm at 10:36 am