Today in the garden ... harvesting legumes 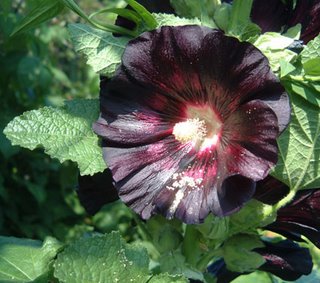 No this isn't a legume. It's a purply-black hollyhock. Nice though, isn't it?

Although I'm far from self-sufficient (until I find a way of growing chocolate biscuits in the garden it's never going to happen) I am now eating home-grown food pretty much on a daily basis. And the leguminous crops are doing especially well just now, so I've been having a big harvest day to get some of the surplus into the freezer.

Kew Blue is just delightful. Look at the pods ... long, thin and straight, satin-textured, and the most beautiful rich purple. The plants produce fewer leaves than other climbing beans and the pods are produced in pairs on long trusses, like they're dangling from little handlebars. You can see them easily when you want to harvest them. Yields are high and the flavour and texture are both superb. 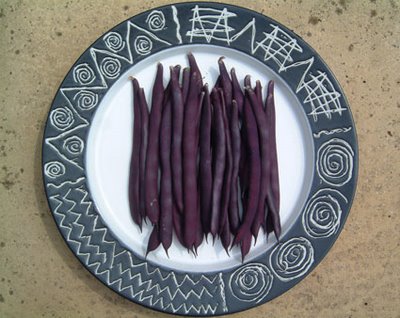 Kew Blue: a gourmet bean if ever there was one

So this is another superior heritage vegetable which I know a lot of people would appreciate having the chance to try. But it isn't widely available ... I've only found one supplier other than the Heritage Seed Library. I haven't been able to find out anything much about this queen of beans ... even Google is pretty low yielding, and most of the hits are for a salpiglossis with the same cultivar name. I assume it has some connection with Kew Gardens. It appears it was accidentally omitted from the Heritage Seed Library's 2006 catalogue ... which may explain why they've been sending packets of it out as freebies to members this year. That's where I got mine from, in fact, and as freebies go it's a real corker.

My other HSL bean, Mrs Fortune's, doesn't come into quite the same flavour class but it makes up for it with massive yields. I have yet to try the dried beans. 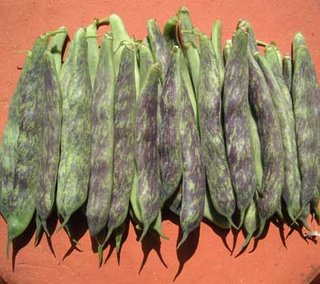 Any moth experts out there? We had an enormous (about one and a half inches across) and spectacularly beautiful moth fly into the lounge today and take up residence just under the ceiling. I've never seen anything like it. Its outer wings were a standard mottled-brown mothy colour but underneath it had incredibly vivid orange and black underwings. I've looked at all the moth identification websites I can find and the nearest thing I've found is the Orange Underwing (huh, there's an imaginative name for such a beautiful creature) but I'm still unsure because it seems to be the wrong time of year for them. If anyone can help identify it from my admittedly crappy photographs I'd be forever grateful.

Yeah yeah, there is a wee bit of camera shake. I was standing on a chair with a hand-held zoom lens and it was the best I could do! The second shot is better but it had closed its wings by then.

Once it had settled it stayed put for several hours, but eventually we decided we'd better evict it because one of the cats had her beady eye on it. So with a lot of precarious balancing on furniture (husband) and frenzied flapping (moth) we trapped it in a long-handled bug-catcher and released it outside.
Posted by Rebsie Fairholm at 11:32 pm

I have a soft spot for hollyhocks as my grandmother used to grow them. She made hollyhock dolls for us....

And I love beans. Your Kew Blues are beautiful.

Resbie, thanks for your nice comments on my blog.
I am a bit of a technophobe, but am catching on quite easily, fooling with the template computer-mumbo-jumbo-word-stuff. Thanks goodness there is a button called "preview"!!

Love those purple beans! I am trying to grow "purple teepee" bush beans, it's not going too well. They don't seem to want to grow. Trying again though, with a new batch.