Tomato, tomato and tomato crawls by with petit pois ...

At the moment I'm growing four tomato varieties. None of them are red.

I've got nothing against red tomatoes. It's just that orange ones taste just as good but have several times more beta-carotene in them. I'm trying out two orange varieties this year: a French cocktail tomato called Clementine which has small golden orange plum shaped fruits which taste citrusy, and a heritage variety called Tangella which has larger round deep orange fruits. 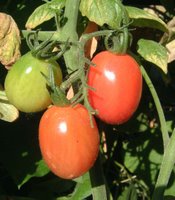 I've also been growing for several years a variety called Pink Jester (right, photographed from a previous crop) which I've been unable to find out anything about. I suspect that isn't its real name ... but I've never seen anything quite like it anyway. The fruits are small-ish, firm, plum/grape shaped and a rosy pink-red colour when ripe with smooth satin skin. They look and taste lovely and have become a regular favourite for me.

I'm growing another heritage tomato, Black Plum, which comes from Russia via the Heritage Seed Library and has dark garnet coloured fruit. And yes, it's another plum-type. You may have noticed I have a preference for those. One reason for this is that I actually hate raw tomatoes. Can't eat them. So I grow varieties which are nice cooked.

I plant tomatoes in the ground rather than in purpose-made growbags. Why? Because I think growbags are a bit rubbish. Unless you use huge ones, the soil medium is very shallow and not really adequate for a deep-rooted heavy feeder (which tomatoes are) and the close spacing is a recipe for straggly and diseased plants. They also need constant feeding and watering. Tomatoes are very forgiving plants and you can get a good crop from them in growbags if you tend them assiduously, but they do better in the ground, especially if you also give them a bit of elbow room.

I have to overcome my natural laziness and prepare the ground carefully for tomatoes, because they are responsive to it and taste better when you grow 'em in good soil. That means digging it over a couple of weeks in advance, getting rid of as much couch grass root as possible, and then topping it with a layer of rotted horse manure, organic general fertiliser, and seaweed meal. I don't dig it in, because the soil here is so sandy it swallows up organic matter in no time at all anyway. I just give it a gentle raking and let my jolly soil bacterium friends do the rest.

When I run out of space in the veg beds I plant a few in large tubs. They work well, if they're nice and deep and the soil medium is rich and fluffy. And you remember to water them.

I use a slightly unconventional method for preserving tomato seeds. I confess it was discovered through idleness, but I stand by it. Fold a sheet of kitchen roll into quarters, write the variety name on it and scrape the seeds out of a ripe or over-ripe tomato, complete with jellyish gloop. Spread it all out across the surface of the kitchen roll so the seeds are separated, and leave it in a warm place to dry. That's it.

At this point I can hear a chorus of experienced tomato growers shouting "Whaaaaaat? Madwoman!" But I've been doing this for five years and the first sheet I made (with seeds of Pink Jester scraped out on a momentary whim while I was chopping up veg for dinner) is still showing 100% viability. Which for 5-year-old seeds is pretty good.

The jellyish gloop inside a tomato contains a chemical which helps preserve the seeds and aids future germination. That's why the conventional method of tomato seed saving involves leaving them to ferment in this gloop until it goes smelly and revolting ... enough to put you off tomatoes for life. But with the kitchen-roll method, the same basic process is happening as the gloop dries but without the mess and whiff. The gloop also works as a very effective glue and keeps each seed firmly stuck to the kitchen roll, sealed in until it's ready to plant.

When you want to sow the seeds you can just tear off bits of the sheet and sow them. The seeds may have a fragment of kitchen roll still attached. That's OK ... it will help to keep the seed moist during germination and then biodegrade.

Tomatoes are native to South America and their original colour was golden yellow. I was surprised to learn that red tomatoes were first grown in Europe as an ornamental plant, not for eating, back in the 17th century. They were known as love apples and had an aphrodisiac reputation. I can't believe people used to grow them over arbours though. Apart from the unpleasantness of having ripe fruits drop off and squish over you, it has to be admitted that tomato plants absolutely whiff. Leaning back into a bower draped with them ... blech. No doubt they've thwarted many a romantic assignation.

The best thing about tomatoes though is their botanical name. Lycopersicon esculentum. It means 'edible wolfpeach'.
Posted by Rebsie Fairholm at 9:53 am