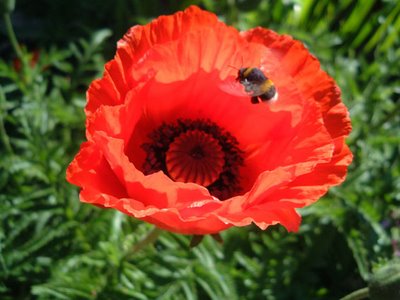 The bees can't get enough of this oriental poppy. They go in and roll around in the pollen. Actually this one looks rather like a miniature guinea pig.

I found some supports for the Champion of England peas. I was disinclined to drive out to a garden centre to buy canes (although I'll have to go soon because I've run out of horse manure). It occurred to me that I could plunder the mature lilac thicket at the far end of the garden, which is full of overcrowded suckers from last year. I just pruned out a few reasonably straight ones which were over 6ft and used those to make a wigwam. Of course they're all straggly and look a complete mess, but I don't mind as long as they stay up.

I planted the two Champion of England plants which are of suitable size (the others need to grow on for a bit). It's very easy to do because you just bury the whole bog roll in the soil. Meanwhile Mr Bethell's Purple Podded pea is steaming skywards, and Alderman is a joy to behold. 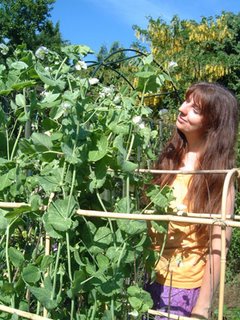 The peas they do grow high ... the 'Alderman' plants have outgrown their bamboo frame and have now overtaken me (I'm 5' 6").

It has to be said that Daughter of the Soil is not a Daughter of the Kitchen. In fact I was booted out of my domestic science class at school and ended up with a CSE Grade 3 in woodwork instead, which was far more useful. I'm competent enough at cooking, it's just that I don't much enjoy it. In an ideal world I'd just grow everything and let somebody else do the culinary stuff. But this morning the newly opened elderflower blossom at the bottom of the garden smells so fantastic I was motivated to stew up some sugary gloop which I hope will transform itself into elderflower cordial. I consider myself very lucky to have an elder tree in the garden, though I expect it got there as a weed when the previous owners weren't looking, and it's crammed in among the damson trees where it doesn't get enough sun. I love elder. It's supposed to be a defence against witches, although it hasn't got rid of me yet. 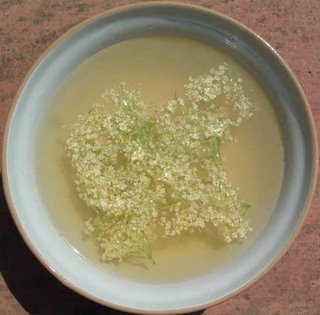