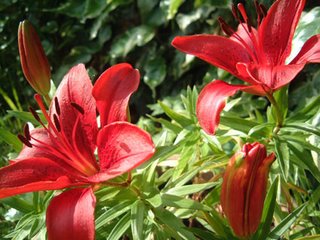 It's that time of year again. Driven indoors by the stench of burning flesh as everybody in the neighbourhood dredges out their barbecues. I've been vegetarian for 15 years and the smell of roasting meat really turns my stomach. And just to add insult to injury it sets off my asthma.

I steeled myself for the unavoidable and denuded the Tewkesbury Baron apple tree of 10 out of its 12 apples, before they get too plump and shiny and untouchable. The tree didn't want to let go of them either, which made it harder. But it had to be done. I ate one. It was disgusting. But I was still delighted with it. 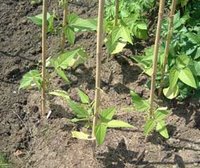 The other vegetables are doing well though and some things are now ready to harvest. Climbing French bean Mrs Fortune's (right) is working its way up the bamboo poles. Runner bean Black Magic is already at the top of its 7ft poles. The red-flowered broad beans are just producing the first mature pods, and although they are now being pestered by blackfly it's a fairly light infestation compared to other varieties. Pea Alderman is around 8ft high and yielding very generously ... the peas are so sweet it would be a crime to cook them, so I just stuff myself with them every day straight from the plant. Pods an' all. (Even when they're way past the mangetout stage, the pods are very edible if you peel away the hard starchy membrane on the inside and just eat the outer part.)

I'm also starting to harvest potatoes. I dug up a few plants of Edzell Blue, primarily because I've completely run out of growing space and needed to clear something to make room for other things. They are pretty much ready anyway, because they don't grow very big compared to modern spuds. As you can see in the photo, they are a beautiful colour and scrub up a treat. I cooked these as new potatoes, and very tasty they were too. Unfortunately they aren't ideal for boiling ... they lose their colour (they just end up a murky brown colour and the water goes dark green) and they also readily disintegrate, but you can't have everything. 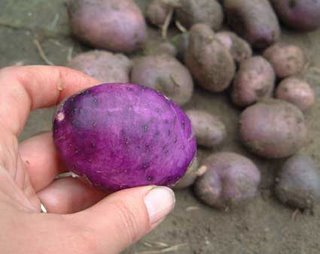 Freshly harvested Edzell Blue potatoes, which look especially nice when they're scrubbed up

It may be time to declare a crop failure on the Grando Violetto broad beans though. They've been so badly afflicted by blackfly they've stopped growing altogether. They have a few pods which are developing OK but not much of a yield. Unless I pretend I was growing them as a green manure all along. Yes, that's it. I only wanted the nice nitrogen nodules on their roots. Blub. 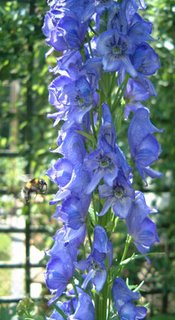 The wild part of the garden is coming along nicely. Look at this lovely monkshood flower spike (Aconitum napellus) with a bee just poised to shove its proboscis in there. It's highly poisonous but the bees love it. Having a wildlife-friendly garden has its downside though. I started work on a path I've been making between the fruit and veg plots, and had to move the polythene sheet I'd put down to kill off the lawn. I peeled it back very carefully, because there are usually slow worms under polythene sheets in this garden. They adore polythene. Sure enough, I uncovered an elaborate nursery of baby slow worms. There were four of them just under one corner. Very cute they were, only about 4 inches long. The dried up lawn had formed a layer of matting over the earth and they were sitting curled up in little round hollows underneath. They all poked their little faces up through the straw when I disturbed them. So it doesn't look like I'll be building my path now until the autumn. And neither can I walk on the polythene. Which means the only way I can access the fruit bushes for the rest of this season is by trampling over the vegetable plot and wading knee-deep through potato plants. Ah well, nothing I can do about it.

I saw a couple of ants attacking a ladybird today. I didn't know they did that. The ants were going ballistic but the ladybird seemed only mildly bothered. 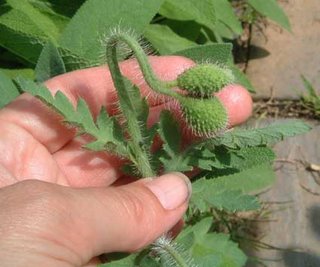 And finally, I came across this mutant poppy, which has two flower heads on one stalk (although it actually seems to be two stalks fused together). Since taking this photo it has flowered, and the buds opened at different times. I have found a few other examples of this in other poppies around the garden so I assume it's just something that poppies do from time to time.
Posted by Rebsie Fairholm at 1:01 pm

Oh, I love the color of those potatoes! I must find me some to plant next year. What a beauty!

Thanks Salix Tree! Yes, they are beautiful, and they have pure white flesh too which makes a lovely contrast.

I notice you're based in Ireland ... I don't know how easy it is to find Edzell Blue potatoes in your area but the Irish Seed Savers Association may be able to help. They have certainly had it on their lists in the past.

Thanks for that webpage! Looks like fun reading. I'll have to take a look over the weekend and see what they have.