I bet you thought a potato was pretty much a potato, hmm? Well, that's because supermarkets usually sell multi-purpose ones so you can cook them however you like. But if you look around there are some varieties better suited to particular purposes, and they come in a lot of different colours and flavours.

These are some of the vintage potatoes I grow or have grown. In no particular order.

Shetland Black
Low yielding, and a pain to harvest because frankly they look like sheep turds. They are almost invisible in freshly dug soil. But if you can find them they are very tasty indeed for baking and roasting, and have a chewy black skin (which fades to brown when cooked) and pleasantly soft and earthy-flavoured floury flesh. There's a ring of purple pigment inside the raw potato which looks really beautiful when you first cut them but doesn't survive being cooked. Whatever you do don't boil them. They go horrible.

It's still a difficult variety to find, generally only available as microplants and not tubers. In recent years it's been available from Waitrose (for eating). While all the books discourage the growing of supermarket-bought potatoes, I have to admit that's where I got mine from.

Fortyfold
The oldest known potato cultivar (first mentioned in 1836) and it's very nice. The tubers are small, deep-eyed and a beautiful metallic mauve colour streaked with cream. Gorgeous. It's especially nice baked or roasted in its skin because it goes crunchy and chewy on the outside and soft in the middle. Yum. The flavour is earthy but not as strong as Shetland Black ... pleasant but not outstanding. The flesh is very dry indeed and needs lots of butter or gravy if you don't want to choke on it.

Red Duke of York
One of my favourites, reliable and easy to grow, and the plants are a lovely dark green with purple edges. Introduced in 1942 and bred from the original (non-red) Duke of York variety. The tubers have a lovely bright crimson skin with a rough mottled surface, and golden yellow flesh. The flavour is very good indeed and they cook nicely and are quite versatile. I've read that this variety is vulnerable to frosts, but when a nasty late frost hit the garden in May last year Red Duke of York was the only variety to survive with minimal damage (most of the others were wiped out). It was also the quickest to recover and regrow.

Fortunately it's getting easier to find Red Duke of York these days and it's well worth growing. A really vibrant spud.

Edzell Blue
Around 100 years old and very beautiful. The potatoes are a shiny blue-mauve and look almost metallic. By contrast the flesh is bright white. It's got quite a floury texture and a delicate but very nice flavour, especially if harvested young. The spuds are quite small by today's standards but are certainly eye catching. 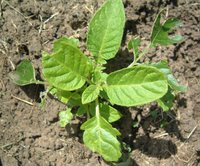 I've been looking for this variety for years, and now I have it ... kind of. It's very rare and you can currently only get it as laboratory-grown microplants. Personally I loathe microplants ... they're too wussy for an organic garden. They may be guaranteed virus free when you get them, but they ain't after five minutes outdoors. I bought some last year and they keeled over within a month. But luckily one of Witch Hill's special traits is that it produces tubers very early in the season, so I had a 'yield' of six tiny tubers, no more than a centimetre in diameter. I've had to preserve them carefully through the winter and start them off indoors in compost modules to give them a sporting chance of growing into decent sized plants. Then, if I'm lucky, I might actually be able to eat some later this year.

Also known as Snowdrop, Witch Hill is allegedly one of the best tasting and best textured spuds ever. It dates from before 1885 and is one of the only varieties I grow which is a 'normal' potato colour.

Mr Little's Yetholm Gypsy
Well, this is different! Its age and origins are unknown, but it was discovered in the Scottish borders and is the only potato variety to have red, white and blue pigmentation (in varying amounts and blotchy patterns). I had to buy this one in the form of microplants, and although it did better than Witch Hill, I only got to eat a couple of tubers, having to save the rest as seed for this year. The flavour and texture are not dissimilar to Fortyfold. Very little information is available about this variety, so I'll be keeping plenty of notes. It's reputed to be reluctant to chit (which I haven't found to be the case, although it does sprout quite slowly) and very susceptible to blight. Joy. 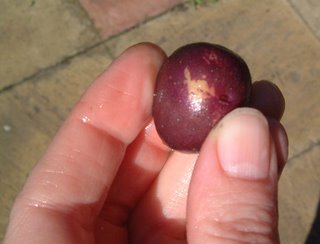 I grow one modern variety, Marfona, a Dutch baking variety which dates from 1975. It's my favourite potato of all time. Incredible texture and flavour, and huge spuds which bake in no time. Lovely. (If you're lucky you can find it in Tesco's.)
Posted by Rebsie Fairholm at 12:31 pm