French beans, runner beans and things that grow up poles

My neighbour offered me some runner bean seeds yesterday and I declined them because I've just had some new ones from the Heritage Seed Library. He didn't get it at all. Why did I need new ones? Hadn't I saved any from last year? Why spend money when you don't have to? He sows the same ones every year which he got from an old geezer across the road, and saves the seed, and that's very commendable indeed. And they are impressive, I'll give him that. He always grows them in the same place, an enormous impenetrable wall of them which screens off the lower garden and yields more than he could eat in a lifetime. I grew some of them myself that he gave me a couple of years back, and they were nice. But I like trying different things too. 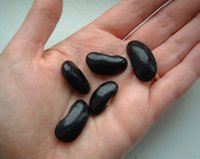 My different thing for this year is Black Magic, a black-seeded runner bean (still green podded though) which was commercially available in the 60s and early 70s. It's now only available from seed-saving organisations like the Heritage Seed Library, and I'll have to preserve it myself if I want to carry on growing it. That means I have to plant it as far away as possible from next door's Wall of Beans to avoid it cross-pollinating. Ideally the isolation distance should be about half a mile, and if I could put half a mile between myself and my neighbour I'd be only too happy, but as it is I'm having to make do with an obliging hedge. The thick jasmine hedge was already established along that side of the garden when I moved here and I've allowed it to grow taller to stop my neighbour looking at my undies on the washing line, and with a bit of luck it will act as a pollination barrier too.

Runner beans are quite decorative in their way – they were originally introduced to the UK as an ornamental plant before anybody thought of eating the pods. But I only grow small numbers of them, because they're quite prolific enough to supply as many as I want (I'm not a huge fan).

I'm much more enamoured with climbing French beans (Phaseolus vulgaris), also called pole beans, which are now making a comeback in the catalogues after almost disappearing in favour of dwarf French beans. They are much more tender and succulent than runner beans, and more versatile. You can harvest the pods whole as 'green beans' or allow them to mature for the dried beans ... or a bit of both. I have two Italian varieties from Franchi Seeds which I've grown for several years, having sourced them on the internet in the days when you couldn't really buy them in garden centres. Trionfo Violetto is gorgeous ... it has purple-tinged stems which darken to purple-black around flower buds, violet-purple flowers and dark purple pencil-shaped pods which are very yummy and probably full of nice anthocyanins. The beans themselves are kidney shaped and dry to a pale chestnut colour with slight mottling. It's extremely decorative throughout its lifespan. At my previous house I grew it up an arch and down the other side (it was very easy to pick because the pods hung down under the arch) and it got admiring comments from everybody who saw it. The pods turn dark green when cooked, but they still taste good. The other variety has pale yellow pods ... wider, flatter and with wavy edges, and is catchily named Meraviglia di Venezia. It has bigger leaves and very pretty flesh pink flowers which turn mauve. The dried beans are small, rounded and dusky black. 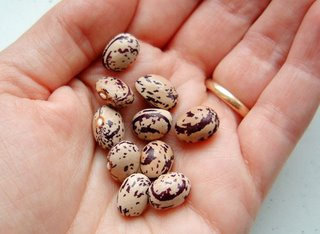 This year I'm supplementing the collection with a couple of varieties from the Heritage Seed Library. Mrs Fortune's is named after a lady called Doris Fortune, so I couldn't pass that one by. It might bring Revolving Doris some good luck. And look at the beans ... aren't they lovely? Speckled and ring-marked. The patterns almost look bitmapped.

They're rampant growers too and tough as old boots. They germinated incredibly quickly and turned into very sturdy plants which seem mostly unperturbed by the buffeting spring winds. 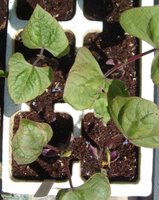 I'm also trying out Kew Blue, which I know almost nothing about. Not even sure which bits of it are blue. I'm finding it a little slow to germinate, but it's getting there.
Posted by Rebsie Fairholm at 1:05 pm

Hi rebsie,
Found your Blog whilst googling 'Kew Blue'. A late comer to the HSL I've received them as a freebie and have just sent in the rst of my requests. How are they coming along - I'm just a bit to the north of you and wondering whether it's too late to start them off this year.
T

Hello T, thanks for stopping by ... I always appreciate comments.

I'm a relative latecomer to the HSL myself, so my 'Kew Blue' is only a few weeks ahead. Mine were a freebie too ... I think they're dishing them out to everyone who joins at the moment! I'd have thought it was still OK to plant them this year. They will soon catch up, especially if the weather stays warm. Other climbing beans I've grown in the past have matured very quickly, so they should still have plenty of time to produce pods.

My 'Kew Blue's are still very small, but I have now planted them out in the ground and I'm just waiting for them to get their feet into the soil. They were quite slow growing to start with but look as though they're about to take off! I'll post an updated photo on my next blog post.

Thanks rebsie,
I'll plant some tomorrow and see how they go.
T