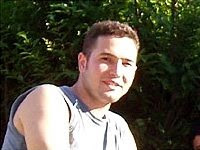 A gardening blog is not the place for a political commentary but I'm making this exception in the light of the Jean Charles de Menezes inquest which concluded today. I think the jury did their best to return the fairest verdict available to them, but the inquest, and the coroner who oversaw it, are a national disgrace.

I'm sickened and appalled by this corruption of justice and feel it's important to say so publicly.

I don't know how widely reported this incident has been outside the UK, so in case anyone doesn't know what it's about, it concerns a young Brazilian electrician in London who was shot in the head several times at point blank range by police officers who mistook him for a terror suspect.

Three years on, the coroner at his inquest barred the jury from returning a verdict of unlawful killing ... denying them their legal right to make their own minds up and effectively giving the police immunity from being held accountable.

What's more, the police appear to have told fibs to the court. All the civilian witnesses agreed that the police didn't give Jean any warning at all before executing him. But the officers saw fit to perjure themselves by claiming they did. The jury made it clear they didn't believe the police, but they were powerless to indict them for manslaughter.

So this poor man was killed by the state without so much as a by your leave and it's not manslaughter? Well I dunno what the hell else you call it. If the trigger had been pulled by anyone other than a serving police officer then they'd be on trial for murder. And you can't defend a murder charge by saying you meant to kill someone else.

I remember at the time of the shooting they initially justified their "mistake" by claiming that Jean vaulted over the barriers into the tube station and that he was wearing a bulky jacket which might have had a bomb under it - contrary to the accounts by other witnesses. Well, now that the CCTV images have been made public it's clear that neither of those things was true. The police have been lying about this case from day one.

The government have been whittling away at our rights and freedoms for years on the pretext of making us all safer, and somehow the anti-terror powers only seem to get used on the wrong people and for the wrong reasons (like the anti-war protesters here in Gloucestershire who had their collars felt under Section 44 of the Terrorism Act). You can now be arrested for making peaceful protests anywhere near the Houses of Parliament. Personally I believe the terrorism threat has been exaggerated as an excuse to pass bad laws, but that's another issue. I have nothing but contempt for the current British government and the illiberal intolerant ideology of Jacqui Smith, our po-faced hag of a home secretary.

So the de Menezes family have not had closure or justice. I hope they'll find the strength to keep fighting for it.

For now, the message being sent out by this blighted coroner is that it's acceptable for the police to blow someone's head off in a public place on the off chance that they might be a terrorist.

I have to agree with you. It does seem like justice is NOT served either in England or here at home in Canada with the decision regarding the Polish immigrant that was "tasered to death" at the Vancouver airport.

i agree. the de menezes jury was hamstrung from the start when the judge determined that there was no clear evidence of intent (cops were caught up in the climate, etc.). isn't that what the jury is suppossed to determine? being american, i am not sure how your court systems work. here, the family would have immediatley filed an appeal in criminal court and/or filed a suit in civil court (where proof of guilt/responcibility is different). do you have a civil court system?

Yes we do have a civil court system, with a different burden of proof. The coroner's court is something else again, and is only there to establish the facts surrounding a death rather than to apportion blame, so theoretically this could still go before a criminal or civil court.

The whole point of a jury is that they're supposed to reach an independent and impartial verdict on the evidence presented to them, and not just rubberstamp whatever the judge says.

The Vancouver incident was terrible too ... it made the news over here. Seems there's no limit to the efforts the police and judiciary will make to cover their backsides when they screw up.

Absolutely agree with this post. An innocent man is dead. Just goes to show you that even in Great Briton we have corruption equivalent to a third world country.

What's more worrying is the amount of right winged keyboard warriors frequenting various forums calling this collateral damage and making it out like it was Jean Charles' fault.

Please do check out my blog too.

Agreed. Any powers that limit the verdict a jury may reach should be removed immediately. Also, if we don't defend civil liberties from this steady erosion, we are f%**ed and taking care of our plots will be the least of our worries.

You're right of course, Rebsie. It was an appalling cock-up and and an even more badly bodged 'cover-up'. Disgraceful.

Clearly the coroner was under instruction from higher up to whitewash it. The reason isn't hard to see; convicting police officers of manslaughter or murder for mistakes like this, in times of high terrorism alert, would be pretty disastrous. Every firearms officer in the Met would resign overnight (too frightened of the consequences of a mistake) and they'd be quite unable to recruit others.

Just to even up the debate a little... in the days after the London bombings, firearms officers were deployed to many hundreds of incidents where suspects were identified by the public as suicide bombers. Each incident was treated as if real, and in hundreds of incidents over just a couple of days we made the right decisions not to shoot. This one incident was a tragic, tragic mistake. How many more times can we apologize?

Just wanted to say - this hit NPR in the states, mostly focusing on the WTF with the judge/jury options.

I heard about this via NPR and also the Alex Jones show. What really scares me about all of this is that these sort of things are going on all over the WORLD now, in plain view at that! I think a gardening blog is definitely one place we can help expose the BS politics and agendas being promoted around the world, if more people don't start standing up for what is right and realizing what is going on right under their nose, then we will all be nothing more than cattle. Thanks for posting this Rebsie, in this day and age it takes a lot of courage to stand up for what is right and it's good to see our cousins in England do so!

A sickening whitewash to protect corrupt police, this makes me want to leave the UK for good.
To add insult to injury, in light of the verdict, it seems the UK police are now harassing the witnesses, arresting family members for made up offenses etc etc. It appalls me to think that we live in a fascist police state, but it seems this is the case. Scum, absolute scum.

Apologies for posting a link, but this is an interview with the woman who blew the whistle on the Metropolitan police after the shooting. She's been forced out of the UK by the bastards.

Have only just found your site and absolutely love it. I'm a secretary of an allotment association and have only recently begun to explore the delights of heritage tomatoes.

However, I have to speak up for police officers...I used to be one in the Met and was on duty in Central London on the day of the 7/7 bombings and the cock-up on 21-22/7.

Firstly I think you are right to be outraged by an incident such as this as it was truly monstrous. But the terrorism threat hasn't been exaggerated to pass bad laws - it's just that too often the law is used badly. No police officer thinks it's ok to off people on the chance they maybe a terrorist and it's preposterous to suggest so. Operation Kratos was a very scenario specific piece of operational procedure - unfortunately there are alot of nasty things most people in their daily lives do not have to contemplate.

This inquest, and its handling, were designed to protect a minority of senior officers and government people. The average police officer is a hard working individual, doing a very neccesary job, and just trying to make it through his shift to get home to his loved ones - just like any other worker. The unlawful killing verdict was removed because it would have allowed the police marksmen to have been prosecuted and it is unacceptable to go round prosecuting officers who do their job.

Besides he rumour I heard whilst at my nick was that following 21/7 the surveillance was taken from the Met and taken over by special forces - could explain the cock up in identifying Jean - the government aren't going to go round prosecuting, let alone advertise, that a black op led to this death.

But to balance it out (and you'll think I'm odd here) I'm no real lover of the police anymore. Shortly after this event I was forced out of 'the job' for reporting a corrupt, racist officer. But I have to speak in support of my former colleagues when armchair criticism is taken as knowledgeable discussion.

Still love your stuff on here...

I really enjoy your blog. I grew up on and own a 300 acre Maine farm. Food that is plentiful, healthy and that you watched grow..know what went in to it is critical. Super blog.