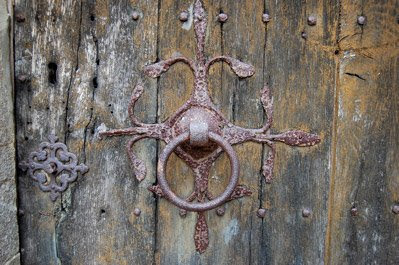 Door handle on Aldham church in Essex. This is the second of the ancestral churches I visited. I couldn't get too close to the first one at Marks Tey because at the time of my visit it was occupied by a grunting tramp with an inside-out Tesco bag on his head.

I've been visiting my parents in Essex these last few days and took the opportunity to go for a little tour of my ancestral heartlands. With my interests in history and genetics it's probably no surprise to anyone that I also have an interest in genealogy, and have been working on my family tree for just over ten years (all of it – not just the direct male line – because genetically the female lines are equally important, and so the whole thing becomes endless like a jigsaw puzzle without edges).

My dad is from north Essex and all his ancestors came from the same cluster of villages in the Colne Valley near Colchester. In the mid 19th century my great-great-great grandfather was living in this cottage: 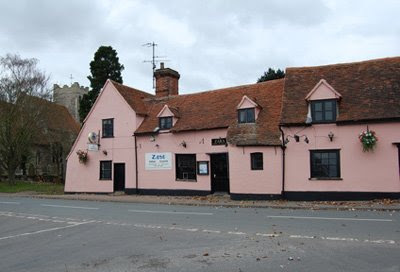 This is the Three Horseshoes pub in Fordham. It was originally three separate cottages, and I think my ancestors lived in the small one on the far left. My g-g-g-gf was a shoemaker, but he (and his father before him) were also clerks of the parish, which was quite a prestigious position involving the keeping of parish records and shows that they must have been literate. In Fordham there was also a plot of agricultural land which came with the job but I don't know where that was located. It was probably here in this cottage that my great-great-great grandmother who went by the curious name of Mary Bugg died while giving birth to her twelfth child (my great-great-grandfather). How they got 12 kids into a cottage this size I can't imagine. The right hand cottage was a blacksmith's forge at that time. In the 1860s when agriculture was in serious decline and work scarce, the blacksmith took to brewing his own beer and converted the forge into a pub. Hence the Three Horseshoes.

Fordham is a very pretty place spread over a wide area with a real sense of being in the middle of nowhere (and lots of mud). It's now a strange mixture of modern housing estates and ancient timber-framed cottages but still has a distinctive character. I do feel quite a connection with the place, which surprised me a little bit, because when I visited my mother's ancestral village of Stogumber in Somerset I didn't feel I belonged there at all.

My dad's family lived in Fordham for about 100 years. We know that most of them were buried in the churchyard there. So I spent a freezing cold hour squelching through the mud and brambles looking at all the graves and found absolutely nothing. It didn't help that most of the 19th century gravestones were completely illegible. I have more experience than most at deciphering old tombstones, having had a lifelong passion for cemeteries, but some of them were so worn away I couldn't even tell which side the inscription was on. It's most likely though that my forebears couldn't afford headstones and that I was trampling on their graves as I waded over the swathes of brambly tussocks.

Trundling back into the 18th century, the pre-Fordham generation came from the nearby village of Little Horkesley. However, there isn't quite the same sense of unbroken history here. During World War 2 a passing German aeroplane on its way back from bombing somewhere else jettisoned a leftover bomb which floated down on a parachute and plonked itself in the belfry of Little Horkesley parish church. As it dropped down into the nave it went off and blew the whole thing to buggery. When you look at how rural the area is, miles and miles of open fields, you get a sense of what extraordinarily bad luck it was for the lovely medieval church to take a direct hit. But in one sense it was quite fortunate, because the immensely thick ancient walls contained the blast and probably saved the whole village from oblivion.

Remarkably, a set of 13th century carved wooden effigies in the church survived, albeit rather damaged. And yet the rest of the destruction was so complete there was nothing left standing above 3 feet in height and not a single shard of glass from any of the windows was found. 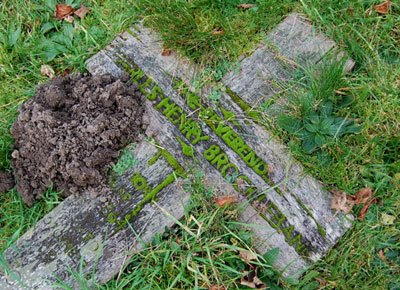 A treat you occasionally find if you hang out in old churchyards. The Reverend Charles Henry Brocklebank has his name writ in moss as nature traces over the inscription on his wooden cross. Little Horkesley churchyard.

A number of other old gravestones from the original churchyard still survive, but again there was no trace of my ancestors among them. 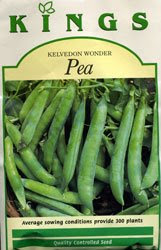 Anyway, none of this has anything to do with gardening. But there is a connection. This part of Essex has a long history in the seed industry and was a former centre of vegetable breeding. There's still an enormous number of nurseries around the area and acres of old-fashioned glasshouses along the roadsides. Close by is the small town of Kelvedon, which gives its name to several vegetable varieties. Kelvedon Wonder is still one of the most popular and widely available peas, found in pretty much every catalogue since its introduction in the 1920s. A sweetcorn called Kelvedon Glory is also still going strong. At least one of the old seed companies still survives, E.W. King, which will be familiar to many people who buy heritage seeds in the UK as they do great work in maintaining some of the important old varieties on the National List.

I would have liked to pay a visit to the farm where Kings Seeds are produced, but they seem to be solely mail order these days. My parents and I did, however, pay a nostalgic visit to another nursery a mile or so up the road in Coggeshall. This was the place where I remember buying my first packets of vegetable seeds (though I don't remember what they were) in the mid 1970s. It has changed and expanded quite a bit since then, and I was delighted to find they had a couple of racks of Kings Seeds, so I was able to get what I was looking for after all.
Posted by Rebsie Fairholm at 8:49 pm

Rebsie, what wonderful stories to know about your history! I hope to find out more about my own history; but realistically, probably not until the kids are older. A cousin on my mother's side traced her family back to the UK, made a trip over there to research more, and discovered that the building housing the records she needed burned in a great fire ages ago. On my father's side, there are records gaps for the early years in America, although we know the line here began with one of two brothers who came from England. I have heard that Towson is a somewhat unusual name there (as it is here), so perhaps one day I will be able to learn more about the family on your side of the pond.

I enjoyed reading about your adventures back to your roots. The villages you mention are just a short drive form where I live and we often go for country walks in the area. There's a small connection to my roots too - my Mum taught at Earl's Colne village school in the 1950s.

I love the picture of the church door.

I am fascinated by the letters in moss. I hope to have my name in moss when I am dead. Or rather, maybe I will try to spell something in my garden while I am still alive!

I LOVE the moss on the wooden cross. It makes it so simply beautiful!