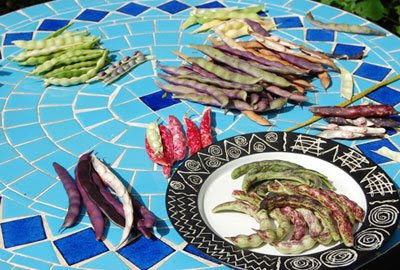 With all the crises I've been dealing with over the summer, the garden has been badly neglected this year. To the point where I'd be embarrassed to let anyone see it, even a non-gardener. I've managed to look after the crops OK, but I didn't keep on top of the weeds earlier in the season and they've got themselves well entrenched. And I had to steel myself to go out there and start dealing with them today, because I'm making a change to my gardening method this year.

Normally I allow the garden to biodegrade gracefully in its own time over the winter. It's partly laziness and partly hippy idealism. My reasoning is that by leaving a tangle of last year's decaying crops on the land over winter I'm providing shelter for overwintering insects, seeds for birds to eat, and ground cover to protect the soil, and by January it's all nicely broken down and easy to dig in ... a nice bit of organic matter to enrich the soil. But in the last couple of years it hasn't worked out so well because it also provides the perfect overwintering conditions for slugs and snails, whose numbers have erupted out of control over the course of two wet summers. So I'm afraid this year I'm clearing it all and the wildlife will have to find somewhere else to shelter. I'm hoping the birds and frogs will quickly gobble up the snails, or else they'll bugger off into next door's garden (where he doesn't actually grow anything so they won't bother him).

But I do have quite a task on my hands. It's a case of: Hmmm, I'm sure there are some gooseberry bushes somewhere over here under these swathes of long grass. I'll just carefully insert a gloved hand and OOOOOOOWWWWWW FUUUUUUUUUCK! Oh yes, there's one.

One thing that will directly benefit the wildlife (birds, mice and slow worms anyway) is the continued incapacitation of the Ginger Peril. We had another crisis recently when his bandage slipped and reopened his operation wound, which had to be stitched up again. And of course it had to happen on a Sunday, requiring a trip to the emergency out-of-hours vet, who charged £113 for a temporary bandage to last him until the morning. It also meant an extra two weeks in the cage, bringing his confinement time to 6 weeks. But he does look cute in his little plastic bonnet. Most of the harvest is safely gathered in now. The last of the bean crops are now drying indoors, as seen below. The dark curvy ones on the left (and shelled out in the bowl) are Major Cook's Bean, which I'm growing for the Heritage Seed Library as part of their Seed Guardians scheme, and which has been so spectacularly prolific it's going to cost a small fortune to post it back to them. Look out for it in next year's catalogue, it's a corker. I've posted a full review of it here. In the middle are the dried out pods of the similarly abundant Poletschka (thanks Celia) and to the right some green-yellow San Antonio from the Heritage Seed Library, which also did well for me. 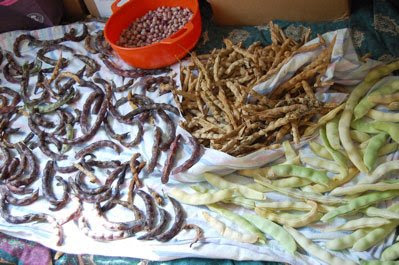 The area you see here spread with beans is the bed in the spare room. Needless to say we don't have many guests to stay at this time of year.

You will notice that I harvest bean pods for seed-saving as soon as they're mature, and dry them indoors rather than leaving them outside to dry on the plants, as is often recommended. The reason for that is the unpredictable weather, which can ruin an otherwise excellent crop if the rains decide to come down heavy in September. This year they haven't, and September has turned out to be better than August, but I wasn't taking any chances. It does no harm to harvest them at this earlier stage, as the plants have already given them as much nourishment as they're going to get. It is important though to keep them well ventilated, ideally by spreading them out so they aren't touching, and turning them regularly. If you don't, they can easily go mouldy.

And no harvest would be complete without a parade of weirdness. And so I proudly present my Threefold Goddess Tomato. She's taken her time to ripen, but here she is. 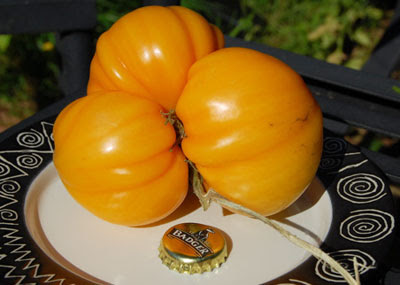 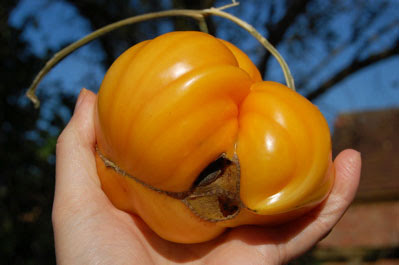 She is the Divine Feminine expressed in fruit. She is essentially three tomatoes fused together in harmonious symmetry, born out of one flower with an unusually wide stigma, and endowed with various crevices and hollows which look a bit ... erm ...

Anyway, she was the first fruit produced by an exotic variety called Orange Strawberry which I grew in my greenhouse. It's an oxheart type, which means it's large, heart-shaped (normally it is, honest) and exceptionally fleshy inside with very few seeds. It's really a cooking tomato, and has a wonderful flavour when cooked as well as this glorious bright orange colour. See here for a full review. Not one you'll find in garden centres ... I got my seeds from Association Kokopelli.
Posted by Rebsie Fairholm at 8:37 pm

Hi Rebsie
My plot's also gone to hell this year with rampant weeds. Just couldn't keep up with the weeding. Hoeing was pointless; the weeds just reroot in wet earth.
Anway, I have a question: when do you take the beans out of the pods? Or do they just get so dry that they fall out themselves? I'm saving my first bean harvest this year, so haven't done this before...

Hi Rebsie - your bean harvest looks wonderful! and I'm pleased Poletschka did well for you too (I love the flavour of the fresh mature beans in a casserole).

I was shelling beans too this weekend - 'Negritos', my lucky dip variety from the HSL. I haven't tried them for flavour yet, I rescued the plant with drying pods from a tangle of chickweed a couple of weeks back!!! I'll grow more next year and hopefully get a big enough harvest to try some Mexican recipes!

Still waiting to harvest the rest. Thank you for 'Mrs Fortunes' - what a good looking climbing bean and with very tasty purple striped green pods. Looking forward to trying the mature beans.

Hope the Ginger Peril is making good progress, he looks a tad p***ed off in theta collar.

Soilman - phew, glad it's not just me. Anyway, it doesn't matter that much when you take the beans out of the pods, but it's usually easiest if you let the pods dry out first so they split open more easily. If you shell them out while they're still moist the colour on the beans (if there is any) may go a bit wishy washy but that doesn't affect their quality.

Celia - I've been very pleased with the Poletschka, and the Salford Black you sent me. I didn't grow my Negritos this year due to lack of time and space ... dwarf beans never do very well in my garden so I have less incentive to find room for them. Let me know what they're like! I think Mrs Fortune's is better as a shelled bean than a green bean so I hope you'll enjoy her when she's ready.

Good review of Major Cook's bean. I shall certainly be looking out for that one!

Sent your Bird's Egg and Ruth Bible off today - 2nd class, tight Yorkshirewoman! You should get them soon.

Good looking harvest! I found your blog via Earth & Tree. Keep up the good work!

am loving that goddess tomato!!

thanks for stopping by, good to see you :-)

Love the technique your share in this post. I'm using the Seedsheet you can have a look at SeedSheets Review