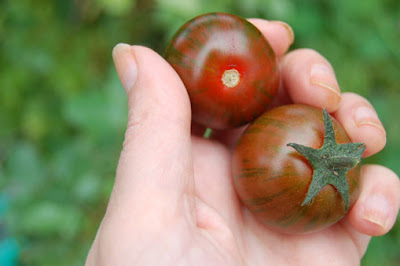 Age: don't know ... information is scarce
Background: a supermarket tomato which has made an impact with resourceful gardeners
My supplier: Marks & Spencer
Pros: beautiful, prolific, tasty, holds up fairly well against blight
Cons: none

OK, so Green Tiger isn't really a heritage variety at all. At least I don't think it is. Reliable information about it is extremely scarce, so I don't really know where it comes from. Marks & Spencer have been selling punnets of this fruit in their UK supermarkets claiming that the variety is exclusive to them, and you certainly can't buy the seeds anywhere. But I was quite impressed with it, so I saved seeds from it to grow myself. As I googled around for more information (unsuccessfully) I came across a lot of other gardeners who have saved seed from it and are growing it for themselves. So it is, in a sense, a "folk tomato" ... introduced for non-gardening commercial use and spontaneously taken over by the people. 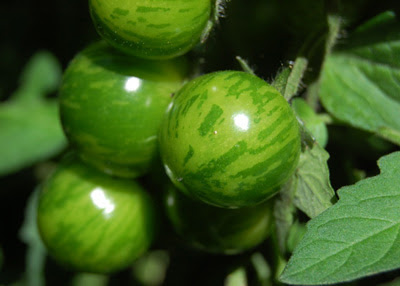 I first saw it in my local branch of Marks & Spencer's in 2006 and was attracted to its unusual appearance. It stood out a mile among the boring red homogenised tomatoes ... a deep red rounded fruit with a glossy skin and dark olive green stripes. I do commend M&S for their commitment to trying out new and unusual things, and this is undoubtedly the most interesting tomato I've ever seen on a supermarket shelf. I couldn't resist buying a punnet of them, and they tasted pretty good. Not the best I've ever had, but good enough that I wanted to try growing it. Commercially grown fruit is never in its prime, as it's usually picked prematurely and chilled to within an inch of its life. So if a supermarket tomato tastes good, it should taste better when home grown. The shop-bought fruit had been grown in Kent, so obviously could cope with the British climate.

Of course the down side of saving seed from supermarket fruit is that you don't have any idea whether or not it's an F1 hybrid. If it is, it won't come true from seed. Not that that's necessarily a problem. Last time I took a fancy to a "Marks & Spencer's exclusive" tomato, Pink Jester, it did turn out to be an F1 hybrid and there was a lot of variability in the seeds I saved. Some were very like the original though, and others were slightly different in shape but had an even better flavour. So I've been happily growing out the F3 lines ever since, and I'm glad I saved seed from it when I did because it soon vanished from the shops. I expected much the same situation with Green Tiger ... hoping it might be an open-pollinated variety which would breed true, but prepared for the likelihood that I'd get a weird mish-mash of types and would have to select the ones I liked.

The first attempt to grow it in 2007 was a failure, because the blight struck incredibly early and destroyed all of my outdoor tomato crops before they'd even set their first fruits. In 2008 however, armed with a newly erected greenhouse, I got a superb crop. Two more plants grown outdoors did less well, producing lots of fruit but struggling to ripen them, so I'd suggest this variety is better suited to greenhouse culture. But the important thing is, all three plants were essentially the same as the original and each other. Green Tiger is a proper open-pollinated variety! Yay! 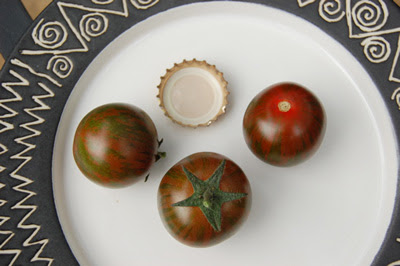 Green Tiger plants have broad leaves of a very dark green, and the leaves have rounded edges. It's quite an elegant plant compared to yer average tomato. Growth is indeterminate, but not exactly rampant. It took all of the season to reach the roof of the greenhouse, and one I grew in a pot on the patio remained quite bushy and compact.

Flowers are small and star-shaped with a slight dark blush on the petals. They grow in short trusses with chunky peduncles bent at rightangles. The calyx is a dark green star, broad and chunky.

Young fruits are a bright emerald green, shiny and spherical. The stripes don't start to develop until they're close to reaching full size. The earliest fruits are about the size of a golf ball, but later ones are more cherry tomato sized. As they near ripeness the green stripes darken, and the rest of the fruit takes on an orangey-brown hue, eventually ripening to a deep dark burgundy red with a more bright and intense red at the top of the fruit (hidden under the calyx, so you only see it after picking). The green stripes stay green, and are kind of mottled. It's an unusually dark green, like a very dark olive.

The surface of the skin is very shiny and attractive. Like most commercial varieties, it has quite a thick skin and stays very firm even at full ripeness. This is what commercial growers want, to enable it to withstand packing and handling. The advantage it has to gardeners is that the fruits are fairly resistant to splitting. 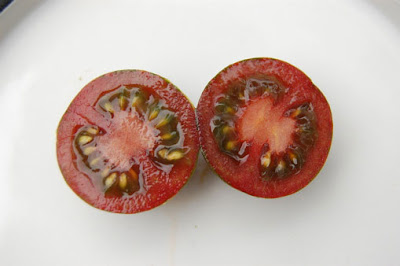 Cut open, the flesh is thick and the fruits hold their shape well ... not at all squashy even when fully ripe. The colour is a deep dark red, darker than most tomatoes, and presumably this means it has high levels of beneficial lycopene. There are two locular cavities with plenty of seeds and the gel is a dark green infused with red.

Flavour is good ... just what you want for an eating tomato. It has a rich and full flavour with a nice balance of sweet and sharp.

In my greenhouse, Green Tiger was the variety that held out best against blight. That's not to say it's blight resistant ... it isn't ... more blight tolerant. The leaves succumb in the usual way but the fruits seem to keep going without any problems. Consequently I got a very good yield from it and was able to keep picking fruits over a long period, even as other varieties keeled over around it.

I'm still curious about where this tomato comes from. It was apparently introduced by Bernard Sparkes, a farmer in West Lancashire, but it's not clear whether he bred it himself or brought it in from elsewhere. Marks & Spencer's are marketing it as their own "exclusive" variety, but I wonder what that actually means. Did they commission it? Or does "exclusive" simply mean that they're the only store currently selling it? Is Green Tiger its real name, or just for marketing purposes? I'm a little sceptical about the names and claims made by supermarkets. But certainly this variety doesn't seem to be available in garden centres or seed catalogues. If it really is an exclusive it may well have Plant Breeder's Rights on it, in which case tough shit because it's already doing the rounds at informal seed swaps across the UK.

I'd definitely recommend this. Whether you pick it up through a seed swap or scrape some seeds out of a supermarket fruit (not sure if they're still selling it, and if they are it's only a limited season) it's well worth giving it a go.

I'm changing the way I post Heritage Vegetable Reviews ... they will soon be available all together on their own website. Watch this space!
Posted by Rebsie Fairholm at 7:22 pm

I haven't come across this one - they obviously don't think it will go down well with True Grit northerners! I have saved seeds this year from M&S Jester - just Jester, not Pink Jester like yours. It has the same calyx as Pink Jester. I will see what this produces next year!

This tomato looks exactly like the (Heirloom) Black Zebra Cherry Tomato sold at our local Farmers' Market here in Edmonton, AB. Because the growers said they were heirloom I saved seeds this year and am hoping they grow well next year. They were soooo yummy!

My hunch is that these are the same tomatoes, just with different names.

Glad to see others out there playing "Robin Hood" with supermarket "specialty" tomatoes, somebody has got to do it and we have found some great stuff like that (kumato AKA Rosso Bruno in the U.S., Compari, Yellow Beauty) and of course this lovely little tomato "Green Tiger". I love reading your blog, our interests are very similar, keep them coming.

M, I thought I would let you know, I like you thought originally that "green tiger" might have been black zebera as well, however after growing them and comparing, I can report that they aren't the same. Plants grow differently, fruit size is different, and taste is much better in "green tiger".

I tried unsuccessfully to get this tomatoe at Marks & Spencers.....any ideas of who may have it/wish to swap!
Excellent site, the reviews whet the appetite for trying other varieties :)
Jackie

Hello tomato lovers! These tomatoes you are referring to and have pictured are not Green Tigers. I have grown Green Tigers successfully in my Seattle area garden for several years! They are an oblong cherry type that has golden stripes when fully ripe about two inches long. They have no red on them and they are not round. Maybe you got mismarked seeds or plants? They have a tropical, sweet and excellent tomato flavor. One of my favorites and I grow them every year! There is also a Lucky Tiger that I tried but not nearly as tasty as the Green Tiger! I have bought plants from several local nurseries and also seeds from Johnnys and they have all been exactly as pictured in this link.

Thanks for such a wonderful piece of content. I really appreciate the way you curate the informational content. Thank You. Feel free to check
best plant based sources of vitamin e