The joy of genes ... illustrated!

Patient readers who have put up with me banging on about gene segregation and F2 hybrids ... here's a little photo sequence from one of my breeding projects to show the process in action. I hope this will be a lot more interesting and meaningful than my simply talking about it, since it shows what amazing and beautiful diversity is locked up within every seed. If it inspires you to have a go at some hybridisation yourself ... so much the better.

OK, so these are pictures of pea seeds from my Yellow Sugarsnap project. It matters not what the objective of the project is or how close I am to achieving it ... this is just an illustration of what happens when you cross two varieties.

In this case I started off with Golden Sweet, an old heirloom supplied by the Real Seed Catalogue, and Sugar Ann, a bog-standard commercial variety from a garden centre. 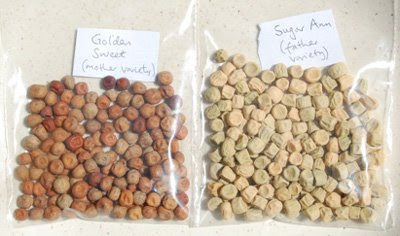 The original parent varieties. Golden Sweet (left) has dimpled tan or grey seeds with purple speckles, while Sugar Ann has pale grey-green or cream seeds which are more wrinkled and slightly bullet-shaped.

So I made a cross between these two varieties, thus creating an F1 hybrid, and this is what the seeds looked like: 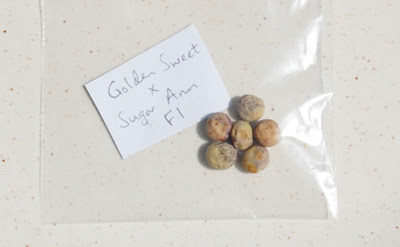 Sorry this is a bit of a small sample, but I'd already planted most of my F1 seeds by the time I took the photo. Anyway, you may notice that the F1 hybrid seed looks exactly the same as the original Golden Sweet seed. There's a good reason for that. The embryo hidden deep within the seed has the hybrid DNA made by the cross-pollination, but the rest of the seed (including its outward shape and colour) is the product of the mother plant. Therefore it looks just like any other seed produced by the mother plant. If I'd done the cross the other way and used Sugar Ann as the mother plant, then all the F1 seeds would have looked like Sugar Ann.

The next step was to grow the F1 seeds and collect seed from them, giving me the F2 generation. I didn't make any further crosses ... as peas are self-pollinating, all I had to do to obtain the F2 seed was to grow the F1 plants and allow them to produce seed naturally. This is the result: 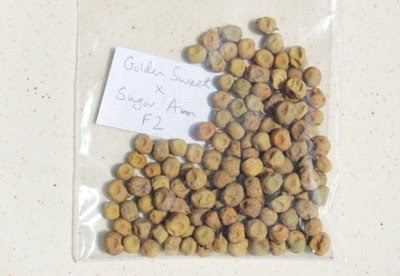 F2 hybrid between Golden Sweet and Sugar Ann (i.e. the seeds from the F1 plants)

Hey up, now we've got something happening. The F2 seeds no longer look exactly like the Golden Sweet parent. In fact if you look closely they're all different. The differences are quite subtle but they vary in colour, size and shape. Some are wrinkly while others are smooth or dimpled. Some have purple speckles, others are plain. They show a jumbled up mixture of traits from the original parent varieties, caused by the random segregation of genes from both parents.

This is the point where plant breeding becomes immensely fun. Because every one of these F2 seeds produces a plant that is unique. And once again I don't need to do any crosses, I just grow the F2 plants and let them set seed naturally to produce the F3 seeds. And I get THIS: 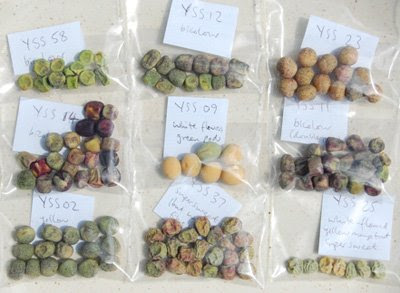 F3 hybrid between Golden Sweet and Sugar Ann (i.e. the seeds from the F2 plants)

This is actually just a random sample, the first nine plants to reach maturity. There were many many more variations, but these few are enough to show you what's happening. I've saved seed from each F2 plant individually, and you can see that there is some consistency in the seed type for each plant, but HUGE variability between plants. Plant 58 produced seeds the same shape as Sugar Ann but a much brighter green and with purple speckles. Plant 02 produced seeds the same shape as Golden Sweet but green instead of tan. Plant 25 produced exceptionally wrinkled seed with no speckles. Plant 09 produced large round smooth yellow seeds which are totally unlike either of the original parents. Plant 14 shows some variability within itself but again a spectacular diversion from the original parent varieties, because the whole seed coat is sploshed with solid purple with a few bright greens and pinks thrown in. 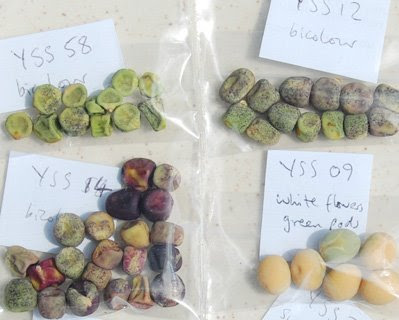 Every one of these packets of F3 seed is a brand new, unique variety in its own right. I could give them all names and launch them on the world. There wouldn't be much point doing so, partly because their offspring would still show some variability and further segregation (so they need to be stabilised for a few more generations first) but also because they won't all be worth pursuing. At a glance I'd say that Plant 09 with its big smooth yellow seeds is probably not going to taste good. In fact I did eat some of its seeds while they were still fresh and they were hard, mealy and bitter. By contrast, the exceptionally wrinkled seeds of Plant 25 indicate an exceptional sweetness, confirmed by taste tests, and that one is probably worth pursuing. Plant 37 also looks useful, as it has the supersweet ultra-wrinkled seed combined with pretty purple, pink and green colouring. There's enough interesting material here to keep me occupied for years. All from a single cross!

Anyway, what I hope this illustrates is that all these seeds are different from the original parent varieties in ways I couldn't have imagined when I made the cross. There are some familiar traits showing up, but also a lot of brand new ones which weren't displayed by either parent. And some of those brand new traits are really quite exciting.

What these pictures show is segregation for seed-coat colour and seed shape. Because in peas those two traits are readily observable. Of course the same level of segregation is happening to ALL traits right across the genome, with potentially millions of different combinations. I hope this gives some idea of how much diversity and scope for new varieties is possible just from making one simple cross-pollination.
Posted by Rebsie Fairholm at 3:26 pm

You are really whetting my apetite for this. My first cross (Lancashire Lad with Oregon Sugar Pod) has produced a few dozen seeds which are going to be grown next year - my F1 hybrids - so much potential.

You can find detailed seed saving instructions on the website of this 20 year-old non-profit:

Best manual we have found to help navigate the exciting world of backyard vegetable breeding is:

Breed Your Own Vegetable Varieties by Carol Deppe

This is so interesting! I'll try it next year.

Sorry to ask a basic question, but how do you do the first cross?

VH - yes indeed, the anticipation of seeing how an F1 is going to turn out is a real thrill.

Seedman - great to see you here ... I've made use of your excellent seed saving guide many times (and have a link to it in my sidebar). I'd endorse Carol Deppe's book too, I wouldn't be doing this without her.

Jeremy - thank you. It's one thing for me to be getting excited about my plant breeding efforts, but to be able to share it and have others appreciate it is something else again. Therefore such nice comments really mean a lot to me.

Little Weed - I've made a couple of posts about how to cross peas, here:

and one about tomatoes:

Now that WAS interesting. Thanks Rebsie; you are a great communicator and explainer. It's got me excited about this seed saving malarkey. Next year I'm going to go nuts with it...

FASCINATING AND INSPIRING! However I too need basic info: how do you make the first cross?

I have now read this post at least three times (probably more) and I still find myself thinking "wow...this is sooo amazing." You have inspired me to devote a little patch of ground to experimenting in the spring.

Also, thanks to seedman and Rebsie for the info links and book recommendation. Fascinating stuff this...

And in a related but different vein, did you read Laura's post on seed saving at Mas Du Diable? I thought it was fantastic!

its very interesting the way you explain about the segregation process..... its simple but also deep...