Today in the garden ... excesses 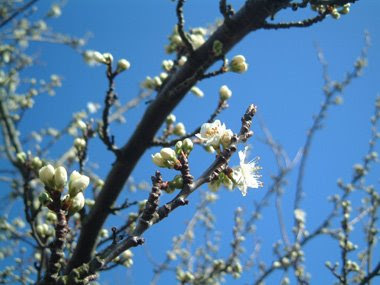 Damson blossom, photographed last week (it's all out in full bloom now)

And then my internet connection went dead. I naturally assumed God was punishing me for my excessive indulgence, or else that I'd clicked on so many pictures I'd swallowed up the entire bandwidth of our broadband connection and that our ISP's servers probably had steam coming out of them. But either way it was worrying, because I'm frighteningly reliant on the internet. All my social contact and my work is done online, and without the internet I'm a lost soul floundering in an empty universe.

The next day it still wasn't working, and after a couple of hours of staring helpessly at the router, and then staring helplessly at the internet configuration software on the computers, my husband rang up the ISP's worse-than-useless helpline. I say worse-than-useless, because we're a Mac-based household and inevitably after spending an hour listening to some godawful tinny music and "please hold the line" on an endless loop, you get through to someone who says "er ... we don't know anything about Macs" and proceeds to read out a list of instructions for how you would fix the problem if you had a PC. Which we haven't.

In this instance though, the problem wasn't technical. It turned out that my husband's debit card had expired. And instead of asking for the new card details, they just left it until the money ran out and then cut us off. Charming.

Meanwhile, here's a very vague and incomplete update about what I'm growing at the moment. 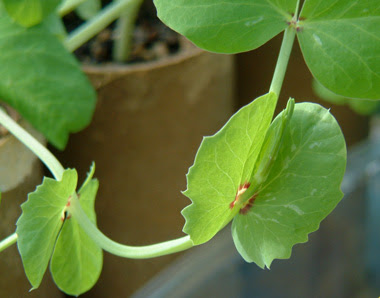 The red-flowered broad beans which got flattened by a double-pane of glass when my ineptly constructed cold frame collapsed have, as expected, survived with no damage whatsoever.

I've finally succumbed to the inevitable and begun planting potatoes in the front garden. Well, what's a girl to do when she runs out of growing space? Other women buy shoes, I buy potatoes. The front garden is a scruffy embarrassment anyway because I'm an exceedingly shy person and get really self-conscious working at the front of the house, even though there's an enormous privet hedge screening me from the pavement. The previous owner of the house kept it nicely stocked with roses and fuchsias and peonies but all the flowers are pink - and pink is not a colour I'm very fond of to say the least. I have a friend up the road who adores all things pink and she had a deep red peony in her garden which she hated, so we did a swap. I love deep red. And contrary to popular wisdom, you can move peonies as long as you do it in September and don't plant them too deeply. But once the red one was installed in my garden it started producing pink flowers, so it must be something in my karma.

Anyway, to make room for a potato bed under the privet hedge I had to murder a luxurious crop of bluebells. But I hasten to add they were Spanish bluebells, the species which is fecking up our native bluebell population, and they do stifle everything else I try to grow and are really just a bloody nuisance. The old lady who lived here before told me the bluebells were already established when she moved here in 1967, and I did feel guilty about destroying a colony of plants which is older than me, but there's no way I've got rid of them all ... they'll be back. It was a heck of a job to dig them out and they stank of fox wee. But anyway, there's now a double row of British Queen spuds in their place. While I was out there digging a lady I didn't know stopped by the gate and said hello. Then she said in a broad Gloucestershire accent, "oi've got fish 'n' chips in moi bag!" I said "oh, that's nice", and she scuttled off gleefully. Ah well, at least people round here are friendly.

Over the winter I've collected a mad number of new peas, some of which I've just started off in modules. These include some rare treasures from the Heritage Seed Library, such as Lancashire Lad (one of the purple podders I haven't tried yet), Gladstone (a Victorian variety reputed to have exceptional sweetness and flavour) and Duke of Albany (another Victorian rarity which is supposedly a parent of Alderman). I've also been entrusted with five seeds of a mystery pea from Ireland, thanks to Seahorse Claire. We know nothing about it, except that it was inherited from someone's grandfather. It may be a commercial variety or it may be a unique heirloom ... we won't know until we've grown it. The peas themselves are small, completely round, and a pale buff colour. It resembles the seeds of Corne de Belier, and I'm wondering if it will turn out to be a mangetout type. Anyway, we'll see. 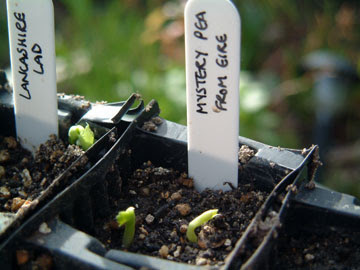 I've also got some pea plants on the go which I sowed in early February and have now planted out, including Alaska (thanks Patrick), Carouby de Mausanne and Oregon Trail. The latter is an American pea, kindly sent to me by Penya Seeds in exchange for letting them use one of my photographs. It looks quite distinctly different from my other pea varieties. I can't explain why, but it does. Yeah I know, except to the eye of love, one pea looks much like another. But take it from me, this one looks different. I'm not expecting it to impress me with its flavour (though I'm open to surprises on that) but it does have resistance to powdery mildew, which is the deadly grim reaper of the pea world ... at least in the moist English climate. Those genes might come in handy for future breeding projects, so that's why I'm trialling it. 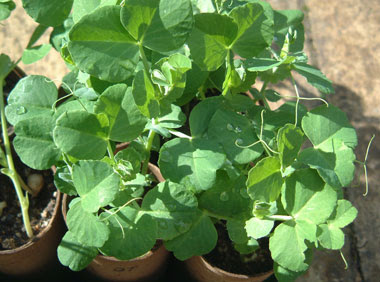 I'm still catching up with the last few seed swaps, having had an enormously enthusiastic response ... and I'm curious about something. What's the deal with Ne Plus Ultra? I think I must have had more people ask for Ne Plus Ultra than all my other pea varieties put together. Everyone wants it and I've even had people who don't normally read my blog coming to me for it because W. Robinson (the supplier I originally got mine from) have sold out. The only thing I'm aware of that makes Ne Plus Ultra special is that it's one of the oldest pea cultivars still in existence (introduced in the 1840s) and was one of the first sweet-tasting peas ever developed. I reviewed it last season and was slightly lukewarm in my praise of it ... it is a good variety with a lot going for it, but I don't rate it as highly as some other Victorian peas like Magnum Bonum (1860s) or Alderman (1890s). I'll be interested to hear how people get on with the Ne Plus Ultra seeds I've sent them and whether it lives up to expectations!
Posted by Rebsie Fairholm at 11:56 pm

Oooh, good to see the mystery peas coming up!

I hate being without the 'net too. That's my social life, that is!

It's weird to suddently have no internet isn't is. Happened to me for a few days a while ago and you suddenly realise how much time you have spare... lol God, how sad do I sound!

I knew those Crimson Flowered Broad Beans would pull through - they're tough!

Carouby de Mausanne is my favourite mange tout as it has done so well in our garden and the huge pods are really tasty.

Ne Plus Ultra peas were particularily featured in one episode of The Victorian Kitchen Garden series, which is the sole reason that I, too, am looking for them. The power of media at work, even twenty five years later.