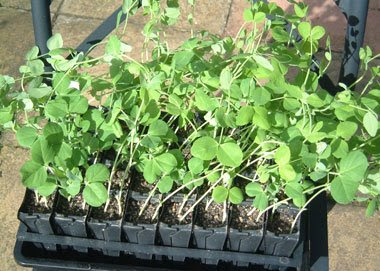 Blimey, it's hard to keep up with the progress reports on all my breeding projects. Some of these pictures were taken two weeks ago.

The photo above shows my Golden Sweet x Sugar Ann F2 seedlings just before planting out. And in case anyone is wondering, no I don't recommend leaving them to get this big before getting them into the ground. The problem here was that they grew far more vigorously than I was anticipating, and became quite rampant while being hardened off in the cold frame. And then just as they were ready to plant out we had forecasts of severe gales, so I held off for a further week. The gales were indeed quite nasty, severe enough to see a whole day's racing cancelled at the Cheltenham Festival (I live about 2 miles from Cheltenham Racecourse). Peas are reasonably tolerant of cold weather but harsh spring winds can damage them, especially the taller types which are long and lanky and fall over easily. So by the time I deemed it safe to plant them out they were somewhat tangled together. As careful as I was, some of the stems got snapped during the disentangling process.

But these look like survivors. They've established themselves well and started to wrap their little tendrils round the spiky twigs I've provided for them. To protect them from any further rubbishy weather they're planted in a bamboo frame with two pairs of old lady's net curtains pegged around it. It's cheaper than horticultural fleece and works a treat. It does look pretty hideous, but am I bovvered? 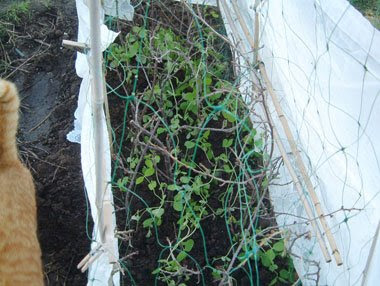 One of the challenges in planting them out was keeping them in the same order they'd been sown in. You may remember I planted different shapes and colours of seeds in specific rows and I had to preserve the order of rows so that I can continue to look for differences between them. To make things more difficult, all of the rows had one or two dwarf plants (the natural segregation of tall and short genes at the F2 stage) and I had to try to plant the short ones at the front edge of the frame, or else they'll get swamped. 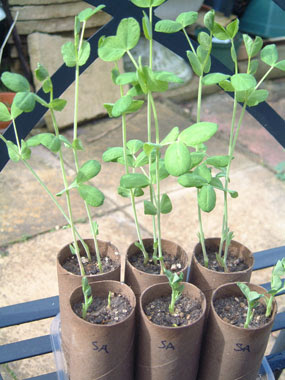 The control group. Golden Sweet at the back and Sugar Ann in front. A bit of a height difference!

And this photo shows why I've got a mix of tall and short plants. This is the control group, a small batch of plants of each of the original parent varieties, which I'm growing for comparison purposes. As you can see, even at the seedling stage there's a huge height difference between Golden Sweet and Sugar Ann. They were sown at the same time, and although Golden Sweet was slightly faster to germinate, most of the difference you see here is genetic. The difference between tall and short peas is internode length. Short peas grow each successive set of leaves in a tight little stack with very little space between them. Tall peas grow a goodly stretch of stem between each set of leaves. So you can often see the difference within a few days of germination.

At this stage in their development, there are not many visible differences between the F2 seedlings other than their height and the presence or absence of a purple splodge in the leaf axil. I was expecting a majority of the seedlings to have the splodge, since it's associated with two dominant genes: A, which switches on anthocyanin production, and D which creates the axil splodge itself. Both these genes are carried by Golden Sweet but not Sugar Ann. Though to be more precise, Sugar Ann may or may not have gene D ... I've no idea because D can only work in the presence of A, the "on" switch. Sugar Ann almost certainly doesn't have A, so it can't produce any purple colouring regardless of whether or not it has any purple-colouring genes. Just one of those fun little quirks of vegetable genetics. 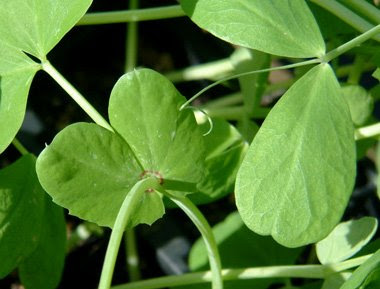 When they were small almost none of the seedlings had purple splodges. But many of them have now developed it, even if it's a bit pale and washy compared to the big double splodge of Golden Sweet.

And here's a seedling which doesn't have a purple splodge but does have red edges on its leaves (which I hope you can just see in the photo). So presumably this plant has inherited gene A but not gene D. I don't know the official name for the gene which makes red edges. It's pretty though. 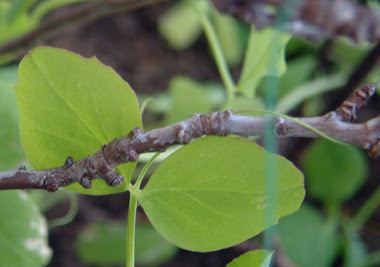 Posted by Rebsie Fairholm at 3:21 pm

Hi, just thought I'd leave you a comment as I often drop into your blog so am adding a link on my own blog, if you want me to take it down just let me know and I will do

Did you hear Stuart Maconie play one of your tracks this evening (Sunday) on BBC 6Music?

Hello a life less simple - thanks for stopping by. I appreciate the link very much, thanks!

Denzylle - yes, thank you I did! It's very exciting for me because I'm a big fan of Stuart Maconie and it's also the first time my music has been played on mainstream national radio. Yip yip!