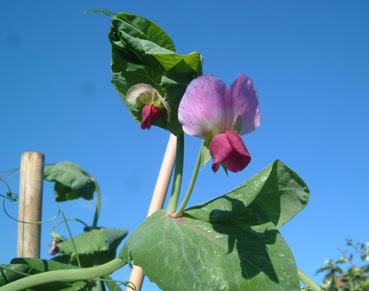 I've talked a bit about my yellow sugarsnaps and I'll post another update on those soon. But it's about time I posted about my Purple Mangetout project again.

To briefly recap, Ben of The Real Seed Catalogue asked me to produce a new pea variety for him because he wants to be able to offer a good purple mangetout pea and currently there aren't any. You can eat purple podded peas at the mangetout stage, but they don't have anything like the sweet and crunchy pleasure of a green-podded mangetout. There's no particular reason for that, except that nobody in the crop development industry has bothered to breed a mangetout with purple pods because pod colour has no agricultural importance ... so the job falls to amateurs like me.

Ben's favourite mangetout pea is Golden Sweet, which is a yellow-podded heirloom pea with red-flushed stems and purple flowers. It's a spectacularly gorgeous variety (see my pictures), it's tall and voluptuous, and the bright yellow pods are sweet and crunchy and delicious. There's nothing else remotely like it. He considers it the best mangetout there is, so basically what he wants is a pea which is just like Golden Sweet but with purple pods instead of yellow ones.

In theory that should be quite easy to achieve. Golden Sweet already has many of the genes associated with purple-podded peas. Most importantly, it has the gene which switches on the production of anthocyanin (purple pigment). A whole load of other genes are involved in determining which parts of the plant the anthocyanin shows up in. To turn Golden Sweet into a purple-podder, all I have to do is get hold of the genes which make purple pods and breed them into it. Purple pods in peas are controlled by two dominant genes, which I can get from any purple podded variety. And I can transfer those two genes into Golden Sweet by a method known as recurrent backcrossing.

It works like this. A cross between Golden Sweet and a purple-podder is going to have half its genome from each parent. The offspring at the F2 stage will have a mixture of traits from both parents, all jumbled up. Let's say I select one of the F2 plants which has purple pods, and cross it with Golden Sweet. This is known as a backcross, because I'm crossing it back to one of the original parent varieties. The resulting offspring (F3 generation) will have three-quarters of its genes from Golden Sweet and only a quarter from the purple podded variety. Hopefully there will still be some offspring with purple pods though. So I select those again, and backcross them with Golden Sweet again ... giving me an F4 generation which is seven-eighths Golden Sweet and one-eighth the purple. By using this method up to the F5 generation, I should end up with a fairly true-breeding variety which is almost entirely Golden Sweet but with purple pods! Recurrent backcrossing is a powerful technique because it eliminates a lot of unwanted variability very quickly while enabling me to hang on to those two dominant genes which make purple pods.

If all goes according to plan I should have a stable new variety by the end of 2009. 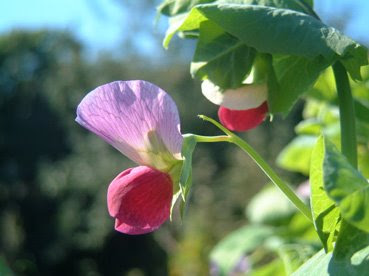 Another photo from 2007. This time it's the Golden Sweet x Desiree F1 hybrid 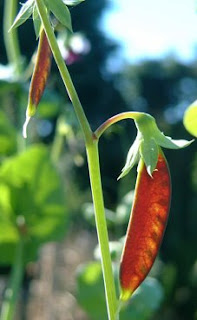 So how's it panning out in practice? Well, I grew the F1 plants in 2007 and you can see from the pictures how they turned out ... they were pretty much as expected. When I crossed Golden Sweet with a purple podded pea, the offspring (F1 generation) all had purple pods. That's because the purple-pod genes are dominant, and they mask out Golden Sweet's recessive yellow-pod gene completely. In fact there was no trace of yellow colouring anywhere in the plants. As for the pods, they were all purple as expected, but partially blotched with green. I've been getting this in all my purple pea hybrids. When I cross a purple-pod with a green-pod, I get a marbled swirl of purple and green in the F1. When I cross a purple-pod with a yellow-pod as I did here, I still get a marbled swirl of purple and green. There are two likely causes I can think of. One is co-dominance, where the dominant purple genes fight with dominant green genes, and you end up with a mix of the two (if so, I should see them separate out into solid colours again in the F2 generation, about half and half of each). The other possible explanation is incomplete penetrance, where the purple-pod gene simply doesn't assert itself fully, for reasons best known to itself. I think on balance this is the most likely cause. The pods in the picture (Golden Sweet x Desiree) are the ones showing the most solid purple ... most of them were decidedly blotchy.

I'm working with two separate crosses in this project. Ben sent me a purple-podded pea called Desiree to do the cross with. It's not a variety Real Seeds currently sell, and I don't know much about its origins. It's a semi-dwarf variety (an unusual thing in peas) which grows to about three feet high. It's bushy and has beautiful flowers borne in pairs. The pods are just beautiful ... a rich dark indigo-purple colour, wide and flat, and ripening into fat little leathery pods with a glowing burgundy colour. It's normally grown as a soup pea and when the pods are mature they're so tough it's a job to pull them off the plant. My own favourite purple-podded pea though is Carruthers' Purple Podded, which is very different. I trialled a number of purple podded peas last year and there was a lot of difference between varieties. Carruthers is tall and refined with elegant, lantern-like flowers borne singly on long curvy stems. It has a brighter burgundy pod colour than Desiree, and smoother, sweeter-tasting pods. So I decided to make two separate breeding lines for this project, Golden Sweet x Desiree and Golden Sweet x Carruthers' Purple Podded, and to grow them side by side and see what differences there are. 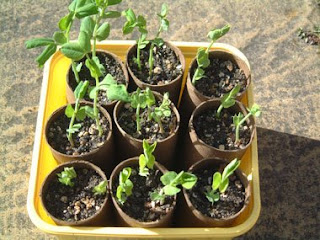 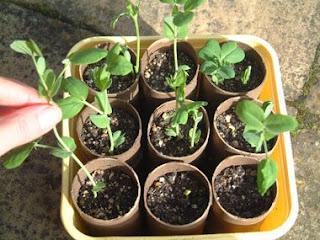 I saved seeds from the F1 plants of both crosses. And a few weeks ago I sowed them, three each in bog-roll tubes. These are the F2 generation, and this is where the interesting stuff starts happening. The plants in this generation should segregate into roughly a quarter yellow-podded and three-quarters purple-podded, but I'll have to wait and see. I sowed 27 seeds of each cross, but germination has been quite erratic and I currently have 18 seedlings of GS x D and 19 of GS x CPP. I may sow a few more, but in theory I shouldn't need too many. As I'm looking for traits associated with dominant genes, I expect about 3/4 of these plants to have what I want. Very different from the Yellow Sugarsnap Project, where I'm after two recessive genes and will only get them in about 1/16. 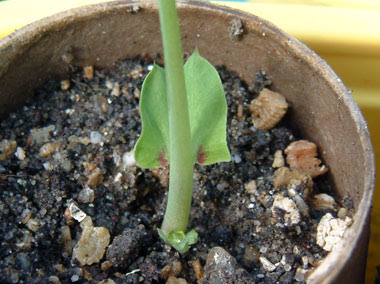 This is the sort of splodge I'm getting in the F2 leaf axils. Seen here on a GS x CPP seedling.

The F2 seedlings are still small at the moment, but there are already some obvious differences. The GS x D cross is segregating into 3/4 tall and 1/4 short (which is normal in crosses between tall and dwarf peas) while the GS x CPP seedlings are all of a similar height because they are a cross between two tall varieties. Almost all the seedlings have purple splodges in the leaf axils, but they vary as to how much they have and how splodgy it is. 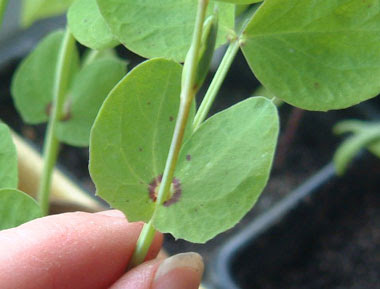 And now here's a curiosity. About a quarter of the plants in both crosses have purple spots on the leaves, which is not something I've seen in any of the parents. I assume there's some recessive trait in Golden Sweet coming through here.

What larks.
Posted by Rebsie Fairholm at 11:38 pm

This is facinating, I can't wait to see what happens next.

Your pea breeding experiments are fascinating. I just love growing the different varieties and saving seed from my favourites. This year I have 7 varieties of pea - including the ones you sent me.
Will these cross pollinate naturally? I have quite a large veg patch but the pea wigwams will have to be fairly close to each other.
BTW did you hear Bob Flowerdew on GQT explain that he no longer uses cardboard tubes to grow peas as he thinks that the fungicide in them stunts the growth. The day before I had planted some home saved seed of "Purple Podded" some in tubes and more in a large deep flower pot. The seedlings in the pot are dramatically healthier and bigger than the ones in the tubes. They have been side by side in the frost free greenhouse. So maybe Bob is on to something!

I missed GQT but I too stopped using cardboard tubes last year for growing due to my pharmacophobia. If they've made it 'safe' for our bottoms it's bound to contain some harmful chemicals.
Your project is very inspiring, I may start to work on a new squash variety this year just for the fun of it.

Thanks for the comments everyone.

Celia - no need to worry too much about cross-pollination. Peas are natural self-pollinators and it's unusual for them to get crossed accidentally even when grown fairly close together. I would suggest leaving enough space between them to prevent the vines getting intertwined though, otherwise you may have trouble telling which is which.

I didn't listen to GQT but it's interesting to hear about Bob Flowerdew's bogroll caution. I'm inclined to take his word for it and I'll take this up in another post. On the whole I've had good results from using cardboard tubes but most peas do seem to germinate and grow faster in Rootrainers, and maybe that's why.

Miss Hathorn - yes please do have a go at breeding a squash! I'd love to see how you get on. My great ambition with all this blogging about amateur plant breeding is to inspire others to have a go. I think it's time we gardeners reclaimed our seeds and our genetic heritage, and doing it "just for the fun of it" is the best possible reason!

And of course there is an excellent explanation of how to create new squash varieties in Dominique Guillet's book ...

I was going to say 'fascinating' but then I'll sound like a parrot! It is, though! :)