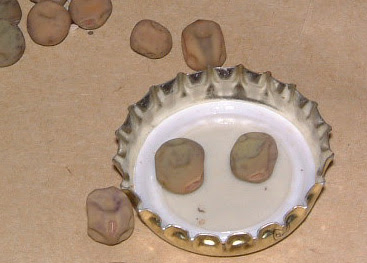 A few days ago I sowed the first batch of F2 seeds for my yellow sugarsnap pea experiment.

I love the variability of F2 pea seeds. Most plants produce seed which looks pretty much the same regardless, so you don't get any clues as to what you're going to get from a breeding project until you actually grow the plants. Peas are unusual in that the seeds do have tantalising variations and elusive hints of what they might develop into. But you don't get to see it until the F2 stage.

When you cross two pea varieties, the resulting F1 hybrid seed looks just the same as any normal seed of the mother variety. That's because the seed is a product of the mother plant. The father's DNA is in the seed embryo, but not in the outer structure of the seed. Only occasionally will an attribute from the father be visible in the seed itself. But when the F1s are grown and self-pollinated they produce F2 seed which is very diverse in appearance. A large green crinkled pea may easily be sitting side by side with a small round tan-coloured one, right there in the same pod. The phrase "as like as two peas in a pod" is thrown out the window. 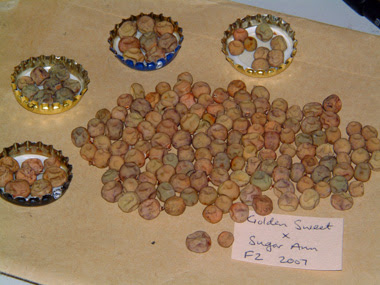 My F2 seeds show a mixture of characteristics from both breeding lines. They have some of the grey and tan colours of Golden Sweet, and varying degrees of purple speckling. Sometimes the speckles are clear and dense, other times they're blurred like purple ink on wet blotting paper. Some have the green colouring of Sugar Ann (with or without speckles) and its surface wrinkliness, while others are smooth and dimpled.

I had a slight dilemma about whether or not to segregate the seeds and plant them in groups of different types. I thought it would be interesting to see if there was any obvious correlation between the outer appearance of the seed and the type of plant that results. Some traits are known to show up in pea seeds. Wrinkled peas are an indication of higher levels of sweetness, because sugar within the seed shrinks more than starch does. It's not a hard and fast rule though, because peas often go more wrinkly if they were dried rapidly after harvest. The presence of purple speckles may indicate that a seed contains the gene for anthocyanin production (the substance which makes purple colours) which is present in Golden Sweet but probably not in Sugar Ann. I think it less likely that the actual seed colour will have a correlation with any obvious trait, but it might do. However, I had to think carefully about whether I wanted to plant them in separate "types" or not. Any selection or grading I do at this stage, however well-intentioned, risks screwing up my Mendelian ratios. And I'm relying on the ratios to give me information about the genetic makeup of the material I'm working with, which is how I decide how to proceed with it at the next stage. By looking at the Mendelian ratios (or lack of them) I will be able to work out which traits are dominant, which are recessive and which involve co-dominance between two opposing genes, and various other patterns.

In the end I decided the observations about seed type were important, or at least that it would be a shame not to try it and see, so I separated them roughly into eight different groups, one for each row of modules. It was entirely subjective, separating them into types when really they're all different. As I sorted through them they were all shouting "me me me!" But this is what I ended up with.

As I explained in a recent post, I'm looking for two recessive genes in this project, one for yellow pods and one for chunky sugarsnap-type pods, and my chances of getting both traits in a single plant are one in sixteen. Statistics are all very well, but the trouble is I can't just plant sixteen peas and be sure of getting one yellow sugarsnap. It doesn't work like that. So how do I know how many to plant? More statistics! I look it up in a chart in the back of Carol Deppe's book. According to that, if I want to be 95% certain of getting at least one yellow sugarsnap (where the chances are one-in-sixteen) I need to grow 46 plants. If I want to be 99% certain, I need 71 plants. My husband tells me the 95% threshold is perfectly adequate, but I have room for 64 plants in my root-trainer modules, so that's what I went with. It's useful being married to an academic scientist who can help me think out my experimental methods, but if I wasn't I would probably just sow the bloody lot and not worry about it.

I sowed the seeds last Thursday, and they germinated really quickly. The first seedling popped its head up less than 4 days after sowing, and by this morning (5 days) there were 30 seedlings visible, which is almost half of them. One thing I can say at this stage is that there's no correlation between seed type and speed of germination ... they're popping up equally happily in all the different groups. 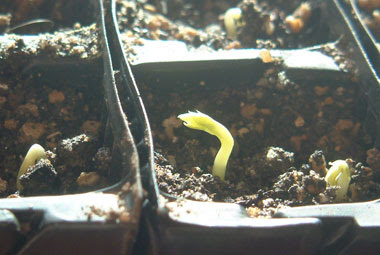 Photographed this morning, the emerging seedlings
Posted by Rebsie Fairholm at 1:40 pm

I'm really looking forward to hearing how all this progresses!