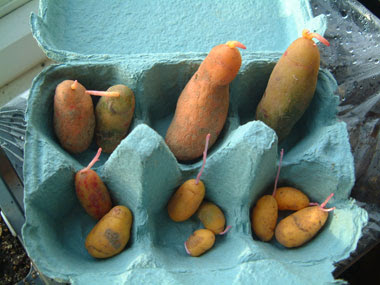 If you're thinking "What the heck is that?"... that's what I thought when I first saw what appear to be small rainbow-coloured potatoes on the Real Seed Catalogue's website, though I think actually my first thought was "I've gotta have some of that whatever it is!"

All I can really tell you about ulluco is that it's a South American tuber, grown and used in a similar way to potatoes even though they're not in any way related. It's not a well known crop in Europe. The only book on my shelves which has any significant information about it (three pages) is Simon Hickmott's Growing Unusual Vegetables.

What arrived in the package were several genuinely multicoloured tubers of varying sizes. Some were pretty small, but the packet says they will still grow into full sized plants. The small ones are all yellow, though one has deep pink mottling on it. Two of the larger ones are a solid orangey-pink with a dusting of dark pink spots, while the other two are a random swirl of muted yellow with deep emerald green, plus pink spots.

I left the tubers in their envelope and stashed them away in a cool dark cupboard for several weeks, but as advised I checked them for sprouts and by the beginning of this week they had got some definite signs of activity and I had to move them to a lighter place before they get too long and spindly. It's a little weird because they don't have such obvious 'eyes' as potatoes, and the sprouts seem to emerge out of nowhere. What's even weirder is that the colours are jumbled up. The yellow ones have bright pink sprouts and the orangey-pink ones and green ones have yellow sprouts with pink tips. 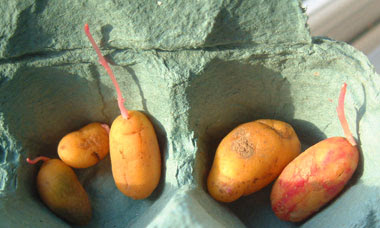 They come with the warning "BE VERY CAREFUL WHEN WEEDING as they flop all over the place and are often attached to the ground where you least expect." Fair enough. Apart from that, though, they're supposed to be reasonably easy to grow and to taste similar to potatoes.

Real Seeds are currently selling ulluco only as an experimental crop because it's not yet clear how best to grow it in the UK climate. It needs a long growing season and may only produce small tubers by the time the autumn frosts arrive. This is very much a voyage of discovery.

I know there are a few other bloggers who have already found and purchased some of these magic tubers so it'll be interesting to compare notes and ideas.
Posted by Rebsie Fairholm at 10:05 pm

OOoooh, I'm so jealous! I wanted some ulluco, but I had to be sensible about limited space. I had already ordered the oca and Patrick sent me some mashua/anu too. I'll be fascinated to see how you get on!

Mine have started sprouting a little bit, but not as much as yours. I'm not going to put mine in the light yet. I'm glad you reminded me to have a look at them, as I hadn't noticed this on the instructions before.

My yacón and mexican cucumber (not sure of the real name for this) tubers didn't make it, but I still have oca and mashua/añu. I also have some ground nuts, that aren't Andean but are another tuber. The Jerusalem Artichokes are already in the ground and I have a few different spuds.

It's going to be the year of the tuber!

Wow, now they look exciting! I'll be very interested to see how they do, they look so cool already.

Ooops, I hadn't read the keep-in-a-bag bit properly and mine have been out in egg boxes for ages. They seem to have decent shoots though :)

I'm really looking forward to comparing notes with other people later this year.

I see Real Seeds is also selling yacón now in the tuber section, if you wanted to give that a try too... I got some more from an SSE person in Belgium.

Last time I visited Lieven I tasted yacón, and it was delicious!

Yacón needs lots of space in the garden, and it's a big plant. It needs about 90cm in all directions.

Thanks for the comments everyone. Patrick, the yacón does sound intriguing, but I have the same problem as Emma ... space is the one thing I don't have, since I've already taken on more than I can realistically grow this year. I shall be following your progress with it though.

I've just ordered some too. Thanks for the "chitting" advice