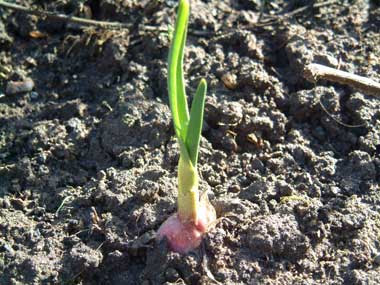 First up, if you're one of the many, many people to whom I owe emails or packages of seed or whatever else, please accept my apologies for being slow at the moment. I'm swamped, and it's going to take me a little while to clear my inbox. I'm trying to keep the blog going in the mean time though.

Last autumn I bought a manouille (bunch) of Rose de Lautrec garlic at a French market in Brighton, while I was down there visiting my music collaborator. There was plenty of it, so I had lots to eat and to plant.

Rose de Lautrec has its own official website complete with obligatory romantic story about its medieval origins. It's a hardneck type and reputed to be very longkeeping. It's also reputed to have a "sweet and subtle" flavour, but I'm not entirely sure about that. The bulbs I bought are searingly hot when eaten raw but the heat (and a lot of the flavour) disappears with cooking. I guess what's left is sweet and subtle, but it depends how you define it. To be honest I don't think the flavour matches up to my home-grown Music garlic, but maybe it's just my coarse English taste buds.

Actually Rose de Lautrec is not a variety, it's a Protected Geographical Indication. When it's grown outside the Lautrec region, it's not Rose de Lautrec any more. There are actually five different varieties permitted to be sold as Rose de Lautrec: the traditional Lautrec Pink and four commercial versions, Ibérose, Goulurose, Edenrose and Jardirose, and I don't know which of them I have. But for all the controlled regions stuff, these pink garlic bulbs have the same genes in my garden that they have in Lautrec, so I will probably still get something worthwhile even if they aren't the same as the "original".

Meanwhile, the F2 peas are coming along a treat. I wrote yesterday morning that 30 seeds had already germinated. I counted them again the same day just before bedtime and there were 53. Then when I got up this morning it was 63. Only one left to go! They are amazingly vigorous considering F2 seeds are supposed to lack hybrid vigour. And already it's clear that they're all different. Even as tiny seedlings, some are whiter than others, thinner than others, shaped differently, or have red flushes on the stems in varying amounts.
Posted by Rebsie Fairholm at 11:52 pm

Well done on the every growing peas! Seedlings always amaze me, I went to sleep with a single red cabage seedling showing and woke up to seven which seemd pretty good going as they've only been in the ground four days! lol

The pea project is so exciting!

I'm always pleasantly surprised by the vigour of home saved seed, of any generation, compared to store-bought. I think it must be because they are generally handled in small lots and given plenty of TLC, which big companies simply cannot afford to do. When I was running a little seed company, we regularly got letters (of complaint, I guess) saying that people had sown too thickly and that too many seedlings had sprouted!

Why do you say that F2 offspring are supposed to be weak. especially in something like a pea that normally inbreeds, which is likely to be carrying far fewer hidden deleterious recessive mutations?

No.64 popped up this morning, so that's all of them now.

I was just thinking the same thing about home-saved seed. It's the same with the tomatoes I sowed last week ... three batches of home-saved F3 seeds (from a commercial hybrid I'm dehybridising) have sprung up in no time at all while fifteen other varieties (all bought in) have yet to show themselves.

I'd read that F2 seeds are supposed to produce inferior offspring compared to the F1 but it's probably part of the general Thou Shalt Not Sow Seeds From F1 Hybrids myth. I hadn't really thought about inbreeding plants like peas being less prone to disadvantageous mutations, but you're probably right. It's a voyage of discovery and I'm learning so much as I go along.

Thanks for mentioning Rose du Lautrec is a PGI. I'm growing it too, and it probably would have taken me a while to realize it was several different varieties going under one name if you hadn't said something...

Yes! I share the excitement of going out to the greenhouse each day and for sure, something has popped up since the day before! I mentioned my new F1 hybrid tomato from Thompson & Morgan had not germinated and I threatened them with writing a stern letter... it did the trick! they are up! Just a stern talking to was all they needed!


The information is very good and very useful. I really like it and I am also waiting for the post information.

Amazing blog you have shared, thanks for sharing and keep posting.