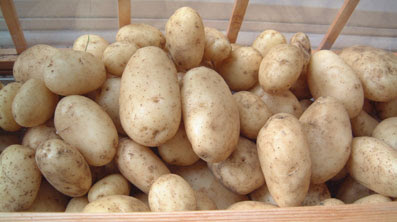 I've been waiting a few years to be able to review this because I had to buy it as microplants (seed tubers are not generally available for unlisted heritage potatoes like this) and I had a lot of trouble getting the microplants to survive. It's now had its third full season and only now am I in a position to taste the darned thing properly.

Was it worth it?

Witch Hill is generally classed as a Second Early but its significantly earlier than most other Second Earlies. That was a very useful characteristic this year when we had an exceptionally early attack of blight ... it was one of the few varieties which managed to produce a full yield before the lurgy struck.

It did very well in the garden, producing vigorous plants with bright green foliage. My crop didn't flower this year ... it produced a few buds but they soon dropped off. But last year it showed itself to possess very pretty and dainty white flowers. Some potatoes are a bit fickle in this respect and only flower when they feel like it.

The potato itself is very presentable looking, with a smooth goldy-cream skin and near white flesh. It has brown freckles but is otherwise quite smooth and shiny. The shape varies, but is usually somewhere between rounded and kidney shaped. Size is also variable, from bite-size to baker-size. Yields are pretty good for a variety of this age and the skin is much thinner and less chewy than yer average heritage spud. 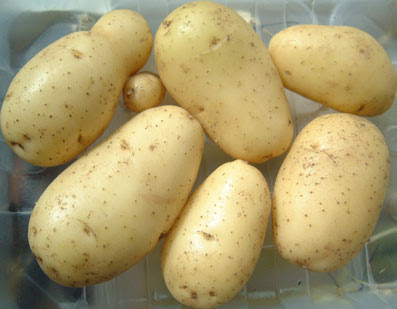 Witch Hill is good as a general purpose potato because its dry matter makes it adaptable to lots of different cooking methods. It makes exceptionally nice roasties with melt-in-your-mouth softness. It makes smooth lump-free mash with minimal mashing action. It has a shorter cooking time than average potatoes (if there is such a thing as an average potato) but will go a bit mushy if overboiled, so needs a bit of vigilance.

The thing that makes this potato stand out from the crowd is its flavour. It's not easy to put into words, and really I just have to say it just tastes very potatoey. It's got a richness and complexity to it though. Potatoeyness elevated to a higher level of refinement, I guess. And it has a really smooth texture too, which is quite an important quality in a floury potato. Witch Hill is ultra floury, but it doesn't have that coarse dryness you often get in floury spuds. It's the ideal floury spud for people (like me) who normally only like waxies.

Definitely a superior variety and worth seeking out, although it's rare enough that it's a bit of a pain to get hold of.
Posted by Rebsie Fairholm at 7:18 pm

Fantastic resource this, Rebsie. Really useful. I've been wondering whether Witch Hill was everything it's cracked up to be, and now I know!!
I've managed to get hold of some Edgecote Purple for this year's growing. And damn difficult they were to source, too. I'm promised they're delicious. We live in hope. Would you like a review if I get a crop?

Yes I would love a review. And if you get a good crop and want to swap a few Edgecote Purples for anything I've got in my list, that would be good.

You can probably guess what motivated me to start these reviews. If you google the name of a vegetable you generally get ten or twenty sites all offering the same description word-for-word which they've copied out of a catalogue. I thought it was about time someone without a commercial interest actually grew these bloody things for themselves and started giving out some honest, useful information.

I do love Witch Hill, it's one I intend to keep growing every year. And I'm not even a fan of flouries.

By all means. IF the buggers grow, there will be some samplers with your name on them! Perhaps I could do a swap with some of Mr Little's Yetholm Gypsy? I've longed to know what they're like for ages...

Hi there Rebsie.You might be interested to know that the name Witchhill comes from a property 3 miles inland from Fraserborough, Scotland by the same name. My grandfather, Alex Brown, bred that variety and names it Witchhill. Its great to see you keeping the variety alive and well.

Hi Rebsie, Alex Brown's Witchill potato should be classed under "Heritage Gourmet".
These were roasted in Beef fat at Christmas and everyone complimented the "old school" flavour and texture.
I have wisely saved a couple of kilo of my own from the garden and as the local potato seed fares I got to visit this spring struggled to get these in at any quantity, I consider myself quite lucky.
I'm hoping to get some TPS from this variety, although I'm not even sure if they flower but its worth a try, Ive personally not tasted a better potato yet!
Something else worth mentioning was after the terribly wet weather of 2012 all the 10 different types of potato I had sown , Witchill gave the biggest crop, in close second was Red Duke of york, both free of blight.
All were grown in native garden soil (silty loam) and fed organically with comfrey liquid manure.
Good luck with all your brilliant experiments for 2013 and beyond!

A quick update, Witch Hill related as another crop of these lovely potatoes were lifted from the garden, but this year a touch of scab was found on a few of them, maybe my soil ph is out of sync or the lack of grass clippings in the trench this time made them slightly more susceptible? I can't keep blaming the weather for everything so will look into what the most likely cause was and try and improve the situation while continuing the crop rotation.
Something I've noticed is the lack of tiny little tubers you get when lifting Witch Hill, conker/marble sized tubers still attached to the roots were nowhere to be seen unlike with other potatoes I lifted, is that a common feature? The yield was good again (slightly more row for row than Maris Piper).
The added bonus of 3 potato fruits being found still attached was immediately seized, they were a lovely dark green ripening to a dark purple colour and eventually yielded larger than normal dark brownish seeds.

Could someone let me know where l can purchase seed or tubers of an old variety called snowdrop it's fabulous our local green grocer gets quite a few sacks early summertime but l have never seen seed potatoes to grow myself l have scoured the internet and there is only a mention of it being grown in the 1920s and it was around as far as they knew in 1885 can anyone help please ? Sarah.