A roundup of the rest of the year's beans 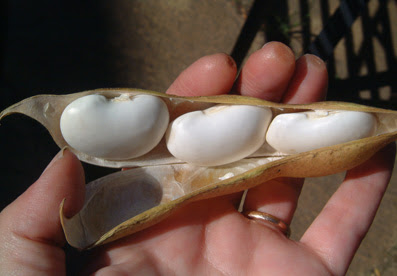 Bean of the Year. It's not a heritage variety as far as I know, but it's the hands down winner of best bean of 2007 in my garden. Spagna Bianco is sold as a "butter bean" but actually seems to be a type of runner bean. A tall and vigorous climber, it gave me a large yield of huge white beans which really do look and taste like butter beans, and superior ones at that. Flowers are beautiful too. Takes its time to mature but it's a real belter. Available from Seeds of Italy.

Last year after I harvested my crop of Mrs Fortune's I found I had four or five beans which were different from the rest. Their usual colour is a light tan (darkening with age) marked with flecks and whorls of maroon-purple. But these few odd ones were almost completely purple, with just a few flecks of tan. If you've grown a few heritage vegetables you'll probably have come across this. Many older varieties show natural variability, which is one reason they've become rare heirlooms, having failed to meet the criteria of a commercial market which demands uniformity. Variations can show up in any vegetable, but with beans it's often very obvious. Brighstone is another one which naturally produces a few darker beans among its numbers. This diversity is actually very healthy and should be considered part of the variety's character, so the odd-coloured seeds should be replanted along with all the others and not "rogued out".

However ... I do like to experiment, so I picked out the purple seeds and grew them separately this year. Just to see if they looked different.

Well they did. Mrs Fortune's is essentially a green-podded variety, and the pods develop blue-purple streaks as they mature, which can become quite dark if they're exposed to the sun. My 'dark' beans produced plants which looked much the same as normal but with noticeably darker pods ... they started to turn purple very early in their development, and (on one plant in particular) matured to a deep indigo with just a few remaining flecks of green (see photo). The flower buds had more of a purple flush than usual too.

And the beans? Absolutely normal. They looked just like any other crop of Mrs Fortune's, mostly tan but with a couple of unusually purple ones. 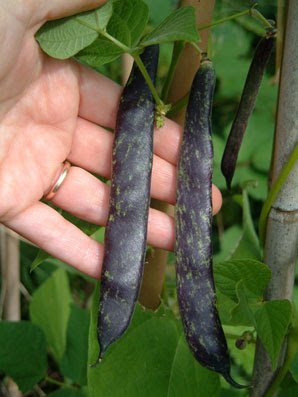 The other experiment I tried this year was to give dwarf French beans (bush beans) another go, having not grown them for years. I've always had a preference for the climbing types, which seem to offer far more generous yields for the space they take up. And I must say, there's been nothing in my experience this year to make me change that view. Dwarf beans do have the advantage that they come in a very exciting range of shapes, patterns and colours, but their yields are miniscule compared to a climber. Part of that is due to my garden being exceptionally badly plagued by snails, which causes problems for any vegetable grown so near the ground. Most of the dwarf varieties I grew were lovely and I will grow them again, but I had so many losses of plants and pods the overall yields were not great, and I didn't even get to taste some of them due to the necessity of saving them for seed. But anyway, here are some pictures of the dwarf beans I grew this year. 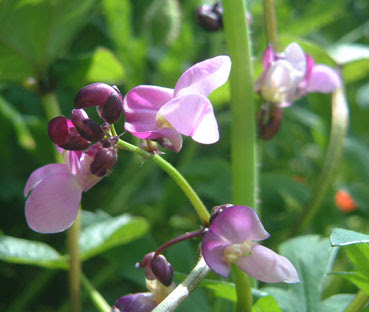 One of the most readily available of the heritage beans, Purple Queen grows from very small brown mottled seeds which don't look very glamorous but produce attractive plants with darkest purple buds opening into lilac flowers. These are followed by shiny, elegant dark purple pods which taste lovely. 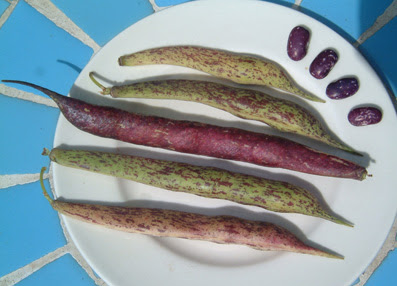 Another variety with some natural variability, these pods all came from Purple Prince. They have dark purple beans inside. 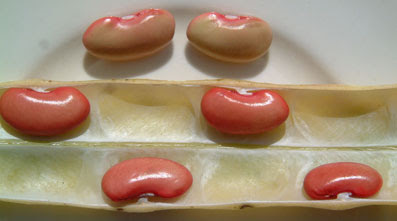 Newly harvested Canadian Wonder, a 19th century variety with green pods and pale rose pink flowers. The beans turn bright red as they dry and are good as homegrown red kidney beans. This variety is still available in some catalogues. 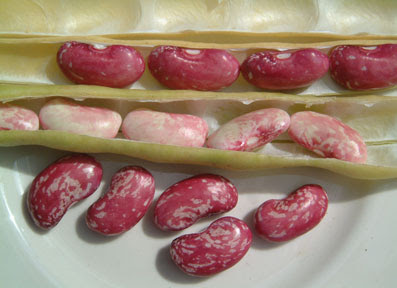 The most prolific of the dwarf beans I grew, Vermont Cranberry starts off the colour of strawberry milkshake before darkening to a deep red with pinkish mottling.

Normally white with a dark red-brown marking around the hilum, Nun's Belly Button is green with a pink belly when it's first harvested. Not the highest yielding bean I've grown but probably the oddest named.
Posted by Rebsie Fairholm at 12:15 am

Those Purple Queen flowers are gorgeous!

I've seen the sort of variability you talk about in Rattlesnake beans, too -- a climber producing tan-coloured beans with golden flecks, but sometimes the beans have a beautiful, deep, golden colouring with tan markings.

A few months ago we were talking about color reversal in dried beans, and how the colors on a two color will just switch. Like your Mrs. Fortune's, going from tan with purple to purple with tan.

Søren of In the Toads Garden (see my blog for the link) did some experimenting and decided the genes within the normal and reversed beans seemed to be identical, and you don't directly increase the probably of one color pattern or the other occurring by selectively saving seeds. Perhaps there is something more complex with a gene combination or a recessive gene.

Matron of Down on the Allotment wondered if anyone knew the name of this reversal, any ideas?

Thanks for the comments everyone!

I haven't tried Rattlesnake, so it's interesting to know that it's another one showing this colour reversal thing.

Thanks for pointing me to Søren's blog, which is fantastic and I don't know how I've managed to miss it until now. I will add it to my blogroll forthwith. My experience with Mrs Fortune's does agree with Søren's suggestion that there's no genetic difference, as the proportion of reversed-colour beans stayed the same, although the pods were certainly a bit darker. But of course I've only grown them for one generation so I can't make any conclusion about it yet. If it was a recessive gene I would expect the proportion of dark beans to increase, even if it took quite a few years to do so. So there's probably some other factor involved, and not a simple genetic difference. I've no idea what it's called though, or even whether there is a term for it!

The Vermont Cranberry looks like a borlotti don't you think?

I guess the term I heard for beans doing this is what Lieven said on Søren's blog, 'Day and Night'. Not very scientific, but clear enough.