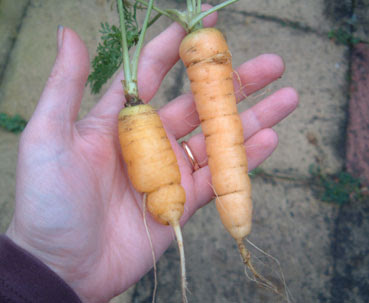 I'll be honest, I'm rubbish at growing carrots. I don't know what I'm doing wrong, or whether carrots just don't like me. Last year I managed to produce only two edible specimens, and the year before that I got half a dozen tiddlers. The ones I do grow are short and stubby and look rather sorry for themselves. I was getting on all right with some Chantenay last year, which are meant to be short and stubby anyway, but the slugs had the tops off them and then next door's dog got through a hole in the fence and dug them up and stuck a disgusting soggy bone in their place. So that was the end of that.

This year's cock-up involved me sowing a meticulous row of Jaune Obtuse du Doubs seed in a bed which already contained masses of seeds from my Somme poppies. The poppies grew quicker than the carrots and swamped them. And I couldn't weed them out because they're special poppies I collected in the Somme trenches, and they're probably the most beautiful thing in the garden, so I had to sacrifice the carrots.

Anyway, now the poppies have completed their life cycle and thrown out another few billion seeds, there's just a twiggy pile of debris in their place. I tend to let nature do its own thing in the winter and leave all of last season's mess quietly dissolving into the soil. But I happened to be rummaging about in the poppy twigs today and found two surviving carrot tops lurking underneath. I dug them up and they turned out to be rather nice carrots. Not only have they survived, they're in perfect condition with no pest damage at all.

So, at a time when I'm mainly having to post photos I took during the summer, it's nice to be able to post one I took today. As you can see, Jaune Obtuse du Doubs is not very jaune but it is moderately obtuse. It's also been known under the slightly less romantic name of Yellow Intermediate. It's really a pale orange colour, but it still looks quite distinctive. It's been around since at least the 1880s and was originally grown for animal fodder. I'll let you know what it tastes like.

How about that? Fresh carrots on New Year's Eve!
Posted by Rebsie Fairholm at 7:25 pm

They look great! So much better than anything I've ever managed.

I've failed to get a good crop of carrots for the past few years now. Last year I had plans for orange, purple and yellow carrots, I sowed 4 times and got nothing! This year I just sowed Autumn King and we got a few sad looking specimens.

Here's to a successful carrot crop in 2008!
Celia

Hi Rebsie, I grew them this year as well and they were very good indeed. So good that I will be growing them again this year.

I failed spectacularly at carrots this year; the few I bothered to dig up had the saddest, threadiest roots ever. It was heartbreaking, so I just left the poor things alone to die on their own terms. (No pest damage, not shaded - just not growing.)

What a lovely uplifting story. I hope the carrots were delicious.

thanks for sharing such kind of blog post so informative and interesting.