Today in the garden .... some occasional bits of summer 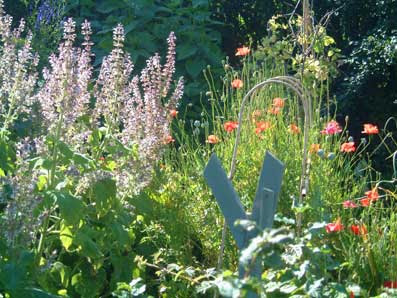 It looks quite nice when the sun's on it, dunnit?

Despite weeks of torrential rain and blustery winds the garden doesn't take long to start looking summery when the sun finally comes out. There was some nice weather over the weekend and I managed to catch up on a lot of weeding, hacking, unchoking and fending off of encroaching brambles. Even so, the garden has a bit of a voluptuous feel to it this year, kind of hovering on the edge of being out of control. What you see in the above photo is the bottom end of the garden which is a bit on the rampant side (the very bottom where the trees are is completely wild anyway ... I leave all that to the faeries). The very tall spikes of pale blue flowers are clary sage (Salvia sclarea), an obscure medicinal herb which I grew from seed. It is beautiful, but I confess I had no idea it was so bloody enormous. I sowed it expecting it to be like the tame little shrubby things which provide us with sage and onion stuffing. The equally tall darker blue flowers behind it are aconite, or monkshood (Aconitum napellus), a very poisonous herb (grown for academic interest only, and for its beautiful flowers). Then there are the Somme poppies, which have completely subsumed two tomato plants and a row of carrots. There is actually a concrete garden path running somewhere up the middle, but I haven't seen it since April. 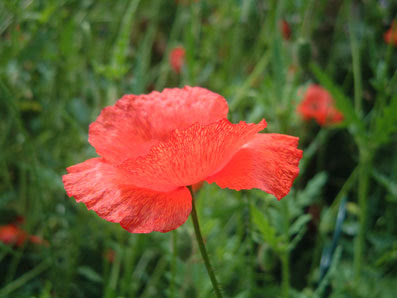 And here's a closer view of one of the Somme poppies, with some rather lovely deep red veining in its petals (most of them don't have this, but poppies are very diverse). The seeds for these came from one of several trips I made to the WW1 battlefields ... I collected them from the remains of a trench which was known to have been occupied by Wilfred Owen in 1917, near the French village of Serre. They are botanically the same as wild British poppies but tend to be much larger and deeper red. Poppies are highly attuned to the cycle of cornfield cultivation and will wait (for years if necessary) until the soil is dug over before they germinate. This super-sensitivity to soil disturbance is the real reason for the mass germination of poppies over the WW1 battlefields ... they assumed four years of being relentlessly pounded with mortar shells was a sign of very thorough cultivation. (I'm sure there's some deep philosophical lesson in that if I could be bothered to think it through properly.) 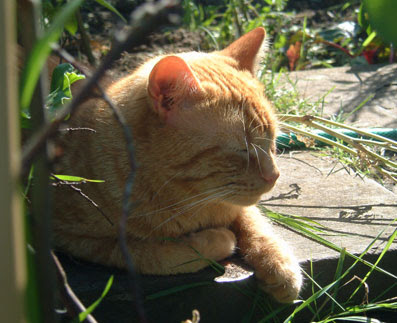 And lastly, the ginger peril. Doesn't he look cute? I let him have a rummage around in the shed the other day. He is a very naughty cat, but there's not much opportunity for him to do any damage in the shed, I thought.

Somehow he managed to knock over a tin of emulsion paint. All over the lawnmower.

He's not allowed in the shed any more.
Posted by Rebsie Fairholm at 11:45 pm

Ginger cats just love to help - in their own way!
just be thankful that it wasn't a tin of gloss.

It's a great excuse to put off mowing the lawn anyway.

Nice photos and very interesting post. Your gardens are lovely. That was such an interesting story about how you got the poppy seeds.

The poppies look beautiful ... your garden is alight in bloom. Mine seems to have sunk into the dog days of summer already after a few weeks of intense heat and sunshine. The delphiniums are nearly finished and I will be sad to see them go.

Your cat looks so very innocent ... I had to laugh at what he managed to accomplish in the shed.

I love my clary sage. It takes up a huge spot in the garden and looks so dramatic and fabulous. But I envy you your poppies.