Digging into some heritage 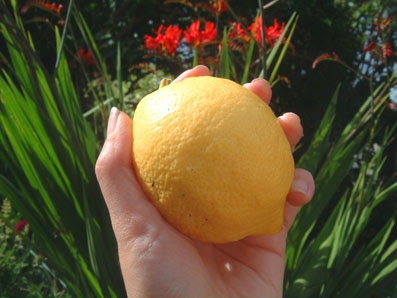 It's always lovely to receive home-grown produce from friends' gardens, but I was particularly excited to be given this exceedingly fine lemon. It was lovingly grown in fluffysgarden, half a world away in southern California. I know Fluffystuff's husband through our mutual involvement in a music website, and although we've never met in the real world my friend Caroline recently went over there to visit them and brought back some lemons from the trees in their garden. Fluffystuff has recently started her own gardening blog and already has lots of interesting stuff on it, so she's well worth a visit.

Meanwhile, apologies to everyone who I owe emails to, or whose blogs I've not commented on for a while ... I am catching up very slowly. I was away last week visiting my parents because my mum has recently been into hospital. She's fine now and recovering well, but that's why you may not have seen much of me for the last couple of weeks.

While I was there I came across this old photograph of my mum doing some digging in her mum's garden in Burnham-on-Sea, Somerset. It was taken some time in the 1950s. My grandmother was a keen vegetable gardener and kept a plot going for most of her life. Looks like she had a good crop of brussels sprouts that year. 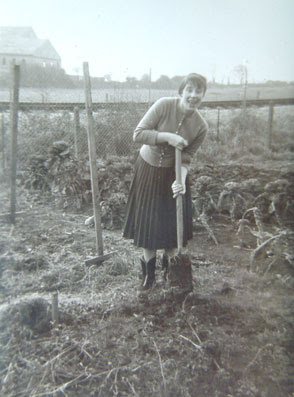 One of the treats of visiting my parents is my dad's incredible book collection, which includes several bound volumes of The Illustrated London News from the mid-19th century. I really can't get enough of those books. The social history and human interest is incredible, and often keeps me up reading into the small hours, unable to stop. I can't say "unable to put down" because these are books you couldn't pick up in the first place – they are huge. The Illustrated London News was the first fully illustrated newspaper in the world and reported on things of everyday concern to the British public in Victorian times: shipwrecks, murders, travel news, the building of new churches and asylums, ladies burning themselves to death by standing too close to the fire in their crinoline skirts (which happened so frequently you wonder why they didn't just stand further away or wear a more sensible material) and adverts for Ford's Eureka Shirts and fly exterminator. It also included occasional horticultural nuggets. Like the Horticultural Society (now the RHS) fete in their experimental garden at Chiswick House (complete with this lovely woodcut engraving) from the newspaper of 14th July 1849, which reported that "The prevailing fruits were strawberries, grapes, peaches and pineapples; and there were one or two raspberry trees of most luxuriant growth."

Raspberry trees? That's a new one on me! 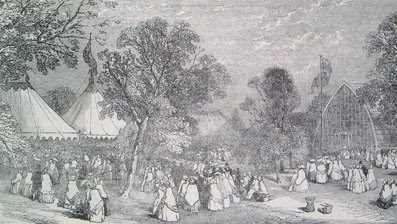 An early RHS flower show, from The Illustrated London News of 14th July 1849

It also reported on this novel gadget for improved strawberry cultivation ... anyone tried something like this?

"Much curiosity was excited at the Exhibition by some novel tiles, which the Managing Committee of the Horticultural Society have adopted in their grounds, for the cultivation of strawberries. These tiles when applied to the plant completely lift the fruit about three inches from the ground, out of the reach of dirt and vermin, and act as a protection against the injurious effects of heavy rains, by admitting the water to run under, instead of over their surface, as is the case with the common flat tile. The substance of the tiles, by absorbing the heat of the sun, and retaining it during night, also accelerates the ripening of the fruit; while, at the same time, they prevent undue evaporation from the root of the plant during very dry weather. Some specimens were exhibited of strawberries cultivated upon this contrivance by Mr. Myatt, of Deptford, to whom the society awarded their certificate of merit. The contrivance is registered, and is the invention of Mr. John Roberts, of 34, East Cheap, City, who has likewise produced a tile for the more rapid ripening of the grape in the open air."

And finally for today, a heritage gardener's dinner plate. Two varieties of pea, Ne Plus Ultra (bright green) and Desiree (greyish green); two varieties of bean, Vermont Cranberry (flat pods) and Purple Queen (darker rounded pods). And the centrepiece: mauve mashed potato made from Salad Blue. I don't peel potatoes, so there are bits of the skin in it too, a deep midnight blue. Plus vegetarian sausages from Tesco's. 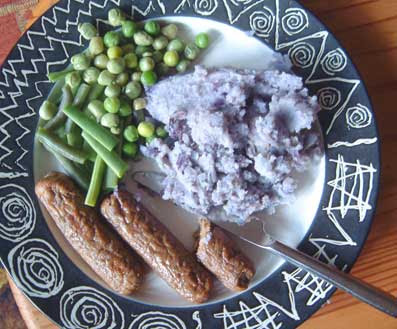 Posted by Rebsie Fairholm at 10:35 am

I've heard of a strawberry tree - arbutus - but never a raspberry tree. Glad to see there's another who doesn't peel spuds - they say all the goodnees is next to the skin and if you don't spray then you're not eating any baddies. There's also a saying in Donegal which goes something like this "'I'm from Donegal, the place where they eat their spuds skin an' all'."

The Salad Blue mash looks great - must try some heritage spuds next season. How did the Vermont Cranberry beans compare with the Purple Queen?

If you can, check out the Illustrated London News' coverage of the Irish Potato Famine. Absolutely stunning reporting, and I suspect it helped mobilise opinion and action in England.

There are some great lemon varieties growing in southern California, and by the looks of it you got one of the better ones!

The pictures are great.

I too eat potatoes skins and all. Some people think the skins are dirty or something, but I think they are the best tasting part! I always think of this as an American/European thing, because many people in the US who don't peel them, although many do.

Do the Desiree peas taste nice cooked like that?

John - quite right, it always seems so wasteful to peel away so much of the potato's goodness. I've been to Donegal but I don't remember how the potatoes were served there ... for some reason I can only remember the Guinness ...

Celia - my taste test on Vermont Cranberry agrees pretty much with yours ... it has a mild but refined flavour. It has a firmer, crunchier texture than Purple Queen. Both were equally nice in their own ways. PQ had a slightly stronger flavour but still quite refined.

Jeremy - funny you should mention that ... I found a report on the Famine late last night in the 1849 book (which I currently have on loan) so when I get a moment I'll post up some extracts.

Patrick - the Desiree peas taste really good cooked. In fact they were better than the Ne Plus Ultra in this instance. They are not like shop-bought peas, they are firm and mealy like beans. Very tasty though, considering they taste quite poor when eaten raw off the plant. I agree that potato skins are the best bit, and I don't mind chewy mash!

Hi
I've just been "blog-hopping" and came across a link to www.vermontbean.com
This New Engand seed supplier has this description:

Bean Vermont Cranberry (60 days) OUR BEAN OF THE MILLENNIUM--An old-time New England heirloom dating back to the 1700's and is perhaps the most attractive of all dried beans. Unduplicated quality, reliability, and hardiness have made it our most popular bush shelling bean since our beginnings in the seventies. Useful as either a fresh shell bean (60 days) or dry bean (85 days). Brightly colored, red-mottled 6" long pods are borne on vigorous, upright bush-type plants. Their sweet, succulent flavor is wonderful in soups, for baking and in a variety of other delicious ways.

I think I'll leave the remaining pods on my plants to ripen fully.

There's other tempting varieties there too!
Celia

hey, I recognize that lemon! We gave Caroline/you some medium-sized lemons... this Ponderosa lemon tree often creates lemons the size of grapefruit! Although thick-skinned, the rind is soft and lemony, perfect for cooking with or candying, and the lemons make great lemonade. Glad to see the lemon went to a good home!