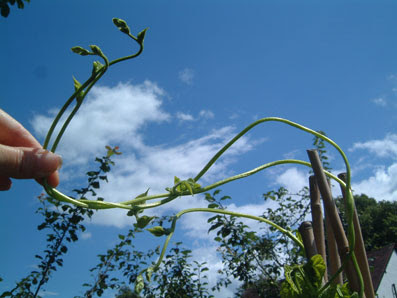 Climbing bean Caseknife outgrows its wigwam. This is a very old variety, known to have been in cultivation by 1820. It grows to about ten feet tall. D'oh!

It's really only when you delve into the world of heirloom/heritage beans that you realise just how boring the choice of beans is in most UK garden centres. It's not so bad for Americans, who are used to having a much more elaborate range. But in the UK you have to search around to find the interesting ones. Until a couple of years ago the ubiquitous Blue Lake was the only climbing variety you could find in most catalogues (it is a heritage variety though). Now there is a much better selection. But you still don't see many of the wonderful varieties intended for shelling out and eating the actual beans rather than the pods. These shelling types are often very beautiful, and so diverse. 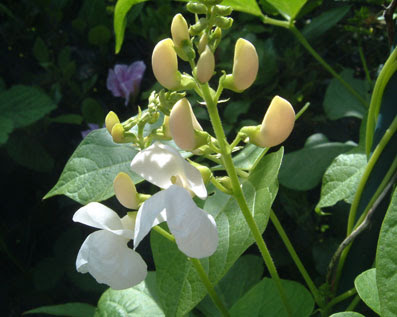 Large beautiful flowers on Spagna Bianca, which masquerades as a butter bean

Last autumn I posted a picture of some "butter beans" called Spagna Bianca which I ordered from Seeds of Italy and am now in the process of growing. Butter beans are rarely grown in the UK because they're too tender for our climate, but I'm fairly confident this is not actually a butter bean. Neither is it a climbing French bean, which is what it says it is on the box (yes, these beans come in a box rather than a paper packet). French beans (Phaseolus vulgaris) are easily recognised when they germinate because the bean itself rises out of the ground on a stalk and the seedling unfurls from it. With Spagna Bianca though, the seedling emerged straight from the soil and the bean stayed resolutely underground. So it's definitely not a French bean. It looks to me like a runner. It has runner-type leaves and flowers and growth habit. Gawdhelpus, it'll be cross-pollinating like billio with next door's crop.

Ah well, between us we'll end up with one heck of a gene pool.

And now for something completely different. 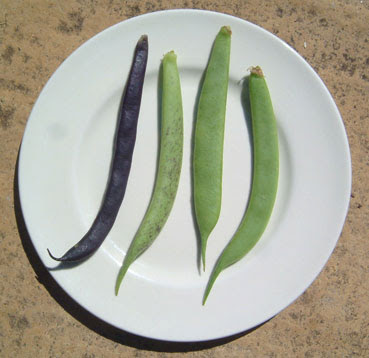 Shortly after being photographed this exhibit was eaten. Purple Queen was probably the best tasting, but of course it lost the lovely purple colouring when cooked and turned a dull dark green. Dog Bean also had a nice refined flavour. Early Warwick had a really strong no-nonsense old-fashioned beany flavour, and a firmer texture and rougher surface than the others. Purple Prince had the least interesting pod flavour and was already a bit stringy, but that's not altogether surprising when this variety has been bred for its stunning and unusual purple beans rather than for eating the fresh pods. You can probably see in the photo that it has attractive slate blue mottling on the outside of the pod ... but this also disappears with cooking. 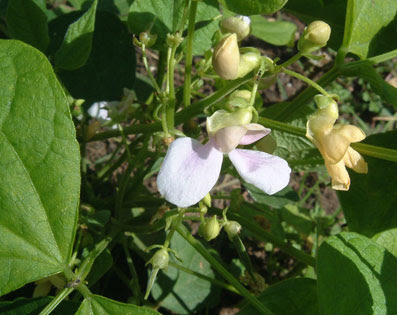 And here's another French bean still a way off being ready to pick ... Canadian Wonder, introduced around 1873, which has large rose-pink flowers and creamy buds and should eventually produce some nice dark red kidney beans.
Posted by Rebsie Fairholm at 10:22 pm

Your beans are doing well - my dwarf beans are just beginning to form. The huge variety of beans is amazing! I love reading the bean list in the Heritage Seed Library catalogue - so difficult to choose just 1 or 2 (there are 37 climbing, 28 dwarf and 3 runnner beans this year!). This year I chose because I just liked the sound of the names - Poletschka and Vermont Cranberry.

I would really, really love to pick your brain about Peas'n'Beans, as I am busy with my Summer planning; I am looking for one or two (or three) kinds of Snap or Snow Peas (interesting colours much welcomed!) I'm also looking for some sort of Pea suited to drying and milling for Pea Flour (and, of course, for Winter soups.)

For pole beans I'll be planting the ever-prolific and hardy Rattlesnake; French Beans will be Golden Wax, and for drying, Dragon's Lingerie and Hopi Black. Don't have space for much more... :-)

Eating beans already?? You're way of ahead of me!

Celia - you're absolutely right about the HSL catalogue ... their range of beans is a constant delight to browse through. Are there really 37 climbing varieties? That's quite astonishing when you consider how few are available commercially. I ordered some Vermont Cranberry from them this year too (after days of agonising over my six choices) so keep me posted about how yours gets on.

Mike - I'd be happy to help if I can. Golden Sweet is a definite recommendation for snow pea.

Is there really a bean called Dragon's Lingerie?!

John - those four pods constitute the entire harvest at present ... though there are plenty of tiny pods on the way.

Hi Rebsie - what colour flowers do your Vermont Cranberry beans have? I've just put some pictures and a little write up on my blog and checked in the HSL catalogue - the flowers should be red, but my plants have pale yellow/creamy/white ones!!!!
What's your verdict on the flavour?