All pictures taken in Cheltenham town centre this afternoon. 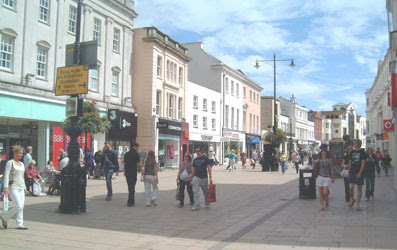 This is Cheltenham High Street today, looking pretty much as it does on any Friday afternoon. It's hard to imagine that most of the people in this photo have had no running water for four days.

And if you've seen the tabloid newspaper headlines and were afraid we might all be dying of cholera, as you can see, we're not. Seven days after the flood, which was the second "100 year flood" in three weeks, Cheltenham looked like its normal self. It was only the presence of lots of fire engines, army trucks and water tankers on the roads that showed things were not normal. Most shops were open, especially the small ones run by local people, though some of the big chains were closed presumably in decisions taken by absentee managers who don't know what it's actually like here. The cinema was closed but the music concerts at the pump room went ahead. The local buses were running. And the general mood on the streets is still chirpy. People were sitting at outdoor tables at cafés. The lion's head fountain was on in Sandford Park (presumably running on river water) and people were sunning themselves on the lawns. There was a shop selling large buckets.

I wouldn't want to underplay the seriousness of the situation ... this is a place where people's homes and livelihoods have been wrecked, twice in some cases, and many people are going through one misery after another as they start to sort out the mess. But you won't see that many people feeling sorry for themselves. There's a contingent of whingers of course, but most people are taking responsibility for themselves and getting on with it. 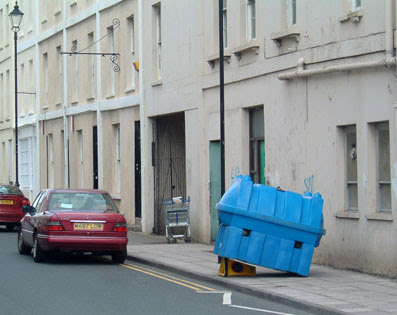 St George's Street in the town centre. Residents desperate for water have tilted this bowser up on a police traffic cone to get the last few dregs out of it. 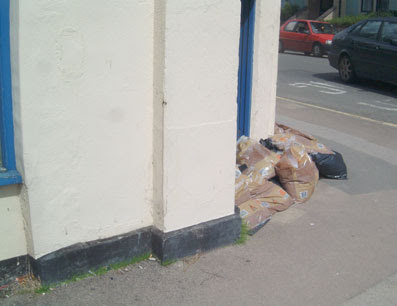 The Prontaprint shop on the Bath Road has bags of builder's sand piled up its doorway. Their shop has been flooded twice in the last three weeks. Last Friday when the floods were doing their worst there was a queue of 60 cars waiting for sandbags at the council's depot, so many had to resort to buying their own sand from builders' merchants. 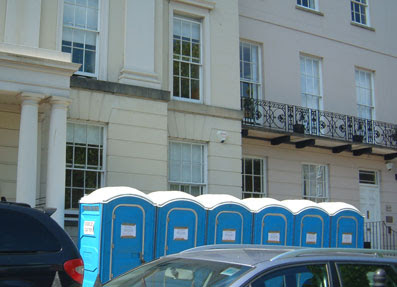 A familiar sight in Cheltenham at the moment as businesses struggle to stay open ... Portaloos for staff lined up outside an office building. They are all padlocked so that the general public can't nip in and use them!

So far the council has not been able to get hold of any Portaloos for public use because there's a drastic shortage, but they're working on it. The town's economy is heavily reliant on tourism so we need our public bogs! And the police have threatened to arrest anyone who widdles in the street. 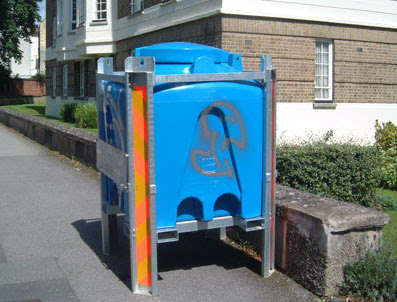 Vandalism is a part of British life these days even in a crisis. This bowser in Rodney Road has been "tagged". Sign addressed to Severn Trent, our regional water company, taped to the bowser in Rodney Road.

I think whoever put this here is being a bit harsh. Yes there is a shortage of water and it's frustrating (north Gloucestershire is running on 5% of its usual water consumption) but I honestly don't think Severn Trent could have done much more to prepare for the current unprecedented situation, and for the most part they have done a fantastic job in trying to deal with it. Of course there are many things they could have done better but flippin' heck, look at the scale of what they're faced with. 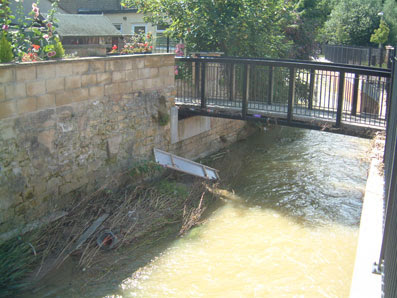 The River Chelt just round the back of Royal Well Lane, still a bit lively and murky but behaving itself. It's what's known as a "flashy" river ... it isn't very big or deep but it's prone to swelling up very, very suddenly, taking surges of rainwater off the Cotswold hills from other nearby brooks. There's still some debris here left over from the flooding. That panel you can see appears to be a kitchen cupboard door. 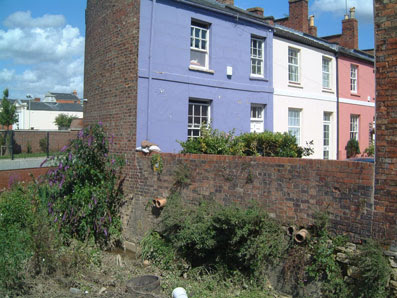 These houses in Little Bayshill Terrace have the River Chelt running right round them and against their perimeter walls, so it's no wonder they still have a few sandbags piled up on the wall. You can't really see it in this pic, but there is a Siamese cat sitting in the top left window.
Posted by Rebsie Fairholm at 11:15 pm

Apologies if that comment I removed was sincerely intentioned, but it's my policy not to allow any commercial advertising on my blog.

If you want to sell flood defence equipment to the British government it's probably more effective to approach them directly. Thanks.

I'm always amazed at the resilence of people during and after a crisis and how fast most people try to get on with their lives. The impact will probably be felt for a while. And thank goodness the music goes on!

Wow, well you guys got what my neighbors were worried we'd get. Last year at the end of June and beginning of July we were evacuated because of a flood, four to five feet of running water.

As you mentioned the garden is a god send at times like these, unfortunately for us, the New York State Health people made everyone that had a garden or farm plow it under. It was probably a good thing because a local factory had a chemical spill. It irritated those of us upriver though.

I found that this year, the gardens (the ones outside the chemical spill zone) in the area are much richer. Although for some reason we're having trouble getting anything in the onion family to grow.

Good luck to all of you.

Thanks for your good wishes Kate and Derek!

My name is Tom, I work for BBC Radio Gloucestershire. We are interested in doing a few little pieces over the next week or so about people in the area who really care about their gardening. I have been messaging a few people who I have found that blog about their gardening exploits to see if they would be interested in being interviewed for the radio.

I was looking at your blog and thought you looked like a nice, interesting person, and I know the blog that I have posted this comment on isn't exactly relevant but you seemed to care a lot about gardening in your profile. I wanted to know if you would be at all interested in allowing me round to your garden or allotment, letting me see how you plant your vegetables or flowers, maybe record a few stories that you have, and tell me about what gardening means to you.

Sorry for having to contact you through a comment post, I hope you read this, but I didn't think you had published any personal details on your profile for obvious reasons! If you are at all interested, please contact my personal email on tom_short@hotmail.co.uk, or alternatively, email our generic company email address at radio.gloucestershire@bbc.co.uk, and put 'For the attention of Tom Short' at the top of the email, and it should get through to me.

Looking forward to hearing from you.

A flood always invigours a garden, unless there is a chemical spill in it. I remember our garden about 2 weeks after it had been flooded. It looked more like the Amazon! Unfortunately the flood water was not so kind to the interior of our house:(

Wow, nice post,there are many person searching about that now they will find enough resources by your post.Thank you for sharing to us.Please one more post about that..

Thank you for sharing to us.there are many person searching about that now they will find enough resources by your post.I would like to join your blog anyway so please continue sharing with us

Really i enjoyed very much. And this may helpful for lot of peoples. So you are provided such a nice and great article within this.