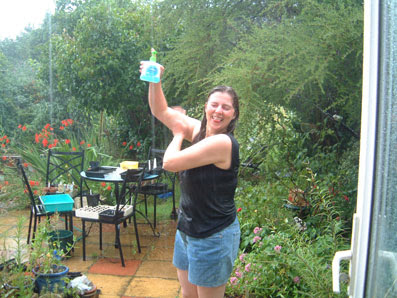 I've posted some odd pictures on my blog, but this is a first. This is me taking an 'al fresco' shower on the patio this afternoon during a torrential downpour.

OK, it may look like a daft thing to do ... but after three days with no water and only being able to "wash" myself with a packet of cosmetic facial wipes (the only thing Tesco's had left), just standing there with all that water tipping out of the sky all over me was the most exhilarating experience I've had in years.

And why not? It's wet. It's clean-ish. Why waste it? I actually feel clean now for the first time since the weekend. It's wonderful.

The only trouble was, when I came back in the house to change back into my dry clothes I found somebody else had got there first. 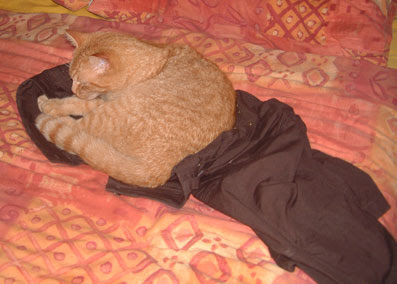 Frivolity aside, the heavy rain was the last thing we needed right now. It won't have helped the emergency services in their efforts to pump out the Mythe water works, nor will it have done any favours for the swollen rivers, nor the morale of people who are wading through their living rooms.

So, it's Day 3 and we're managing fine ... in fact life is getting more comfortable as we settle into a routine with the water management. The first night I couldn't sleep because I was fretting about how we were going to cope for a whole fortnight with no water. But now I have a better awareness of how much water we need and how much we have stored and how often we need to replenish it, I'm not worried at all. We don't currently have enough to last us through, but we're not thinking that far ahead ... we've suddenly developed a mentality where as long as we're OK from one day to the next we don't worry about the longer term. And actually that new mindset really lifts my spirits and makes life in general seem less of a burden. I assume it's the same for others too because there's quite a mood of chirpiness in Cheltenham at the moment, despite the fears expressed in news reports that we may soon all be keeling over from stress.

There is light in the tunnel for Ian and me anyway. I'm booked to do a radio interview in Tamworth on Sunday to promote my forthcoming album so we'll be able to take all our empty water bottles up there for refilling.

I've been following a partially self-sufficient lifestyle for years out of nothing more than a kind of hippyish idealism, but right now I'm reaping huge dividends from it. While fresh food is in short supply in the shops we can make more use of garden fruit and vegetables and leave the stuff in Tesco's for those who need it more. We have plenty of collected rainwater which is clean enough for some basic washing and cleaning needs, which minimises the amount of stored tap water we have to use. We're not totally self-sufficient in the current crisis, but near enough. There's just the two of us in the house, we're healthy and able-bodied and we don't have kids, so it's been easy for us to adapt and fend for ourselves. And we have a car, so if it became intolerable we could just leave. Not everyone here is having such an easy time of it. Radio Gloucestershire put out an appeal today on behalf of a woman desperate to borrow someone's washing machine because she looks after "a number of incontinent people".

The army are still giving out thousands of bottles of water in supermarket car parks but we haven't needed that so far because we still have a few bottles of water we bought from Tesco's before the crisis. We've also avoided taking any more water from the bowser in the street while we still have some stocks of tap water, as there is a desperate shortage. And it IS true what they're saying on the news about the failure to refill them ... Severn Trent Water have said they're refilling them five times a day, but that is simply not happening. I hope things will improve now that they've admitted they're struggling and drafted the army in to help.

Bureaucracy continues to be one of the biggest obstacles round here. First they delayed the deployment of the bowsers because of health and safety regulations. Today it emerged that Gloucester City Council were sticking doggedly to their normal policy of refusing to collect any domestic rubbish bags which are not placed inside the regulation wheelie bins. Trouble is, the enterprising (and desperate) people of Gloucester have been rigging up plastic sheeting and whatever else they can find to collect rainwater and funnel it into their wheelie bins so that they can flush their toilets. For many of them their wheelie bin is the only large receptacle they have available for collecting and storing rainwater. It's really quite scary that the regulations designed to protect public health are so rigidly applied they become a threat to public health in their own right.

Out on the streets of Cheltenham at 11 o'clock this evening it was almost deserted, and the few cars out and about didn't seem to be in any hurry, not even the taxis. There were a couple of late-night dogwalkers, and a pickup truck parked on the main road where a bloke was delivering water bottles to a couple of elderly ladies at the roadside.
Posted by Rebsie Fairholm at 11:32 pm

I am so happy to know you are hippyish. I, too, feel a need to be more self-sufficient. I have about a year's supply of food stuffs, cook almost everything from raw materials, and take great pleasure in preserving my own foods. My danger zone is my dependence on my freezer. If the electricity went out, I would have three days to eat mass quantities of foods. I would have to feed the entire neighborhood. What a party!

What's wrong with drinking the rainwater? Is the area infested with heavy industry or anything else that would contaminate the rainwater as it falls through the air? (I would think most contaminants have been pretty thoroughly rinsed from the air by now, with all the rain you've been getting.) Are there regulations against drinking rainwater or something?

We have no sources of drinking water other than what falls from the sky; our water is sweet and tasty, and, after living off it for... ummmm... eleven? years now, we're all still healthy.

Not trying to be contentious, here; I am genuinely puzzled...

That's a very good point, Mike. I suspect it's as much a cultural issue as anything else. There's a perception that rainwater is "dirty", especially with all the hype about "acid rain" and industrial pollution. How clean the rain really is around here I have no idea, because we've always had unlimited water on tap in the UK, and although there's no regulation against drinking rainwater, nobody does it!

The current crisis is really caused by our reliance on tap water, and the fact that everything is geared up to run on tap water, so that its sudden absence becomes a huge problem. Clearly many, many people around the world manage perfectly well without it. And the fact that this area is surviving pretty well on 5% of its normal water usage shows just how much we waste in our normal everyday lives.

There has been a mad scramble to distribute commercially produced bottled water for drinking, but nobody here has issued any advice about whether it's OK to drink rainwater. We're being advised to collect it for sanitation purposes.

Fluffystuff ... that was my main worry when the electricity supply was threatened ... I have a small-ish freezer but if it was turned off I would lose a lot of stuff (including garden produce) and have a flood of melted ice in the pantry! We're very grateful for these small mercies at the moment.

On drinking rain water- Most of our rain water is collected from roof runoff. There are bird droppings and dirt dust up there, but it washes off in a heavy rain, then the water is pretty clear. To be safe, you can filter grit through paper filters or even pillow cases. You can sterilize by boiling or using chlorine tabs or even a bit of laundry chlorine bleach (which take 4 hours and evaporates into the air). Certainly, you can bath or do some laundry with it, then flush the loo with the used water or water the garden. You would be amazed what you can drink if you are thirsty enough.