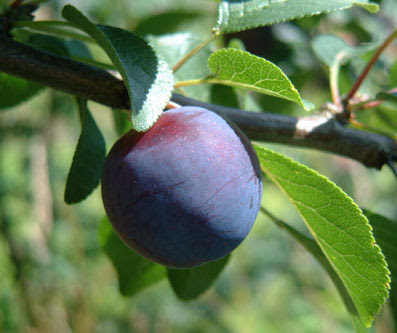 On the menu tonight ... damsons from our very own trees

When I worked in publishing I used to read The Bookseller, a trade magazine for publishers, bookshops and librarians, and one of its most entertaining features was the annual Oddest Title of the Year award. This year the prize went to The Stray Shopping Carts of Eastern North America, which pipped the favourite, How Green Were The Nazis? However, my favourite of the past winners was this gem back in the 80s: How to Shit in the Woods, an Environmentally Sound Approach to a Lost Art. I've never seen the book, but if somebody set up a stall in Gloucestershire selling copies of it now, I think they would move like something off a shovel.

Similarly the webmasters of Composting Toilet World and How To Make and Use a Simple "Sawdust" Toilet must be getting a surge of hits from the north Cotswold area at the moment.

It's not something I've ever had to think about in all my 38 years, but one thing I have learned in the past couple of days is that however magnificent a contraption the common water closet may be, when it doesn't have a supply of water it's not only useless, it's potentially a liability.

Yesterday there was a desperate shortage of drinking water. Today it's bog water. Unfortunately a lot of people in the area are having to use emergency supplies of drinking water to fill up their toilet cisterns, which has led to even more desperate shortages. Many people (and I think it's probably worse up the road in Gloucester than it is here) are wandering around for hours trying to find a bowser that isn't empty. The bowsers are clearly marked with the instruction that their contents are to be used for drinking water only, and when you see how small they are and what a large population is dependent on each of them that makes sense ... but people still need to flush their toilets. Gardeners with brimming rainwater butts are living in relative luxury, and have the additional option to wee in the compost to minimise toilet use. If you live in a town centre flat or a house with only a small courtyard garden (as tens of thousands here do) ... what the hell do you do?

But for the moment our hearts go out to the people of Oxford, Abingdon and other places along the Thames whose flood nightmare is just beginning. I saw an Oxford allotment site completely under water on the BBC news today and really felt for the gardeners who had tended those plots, though in the great scheme of things it seems petty to grieve over lost vegetables.

And as difficult as it is for us, we are doing all right. The water has been off for 48 hours but we still have drinking water, fresh food, clean clothes and hot meals. Not to mention a dry house, which makes me feel guilty when I see pictures of the inundation people are dealing with just a few miles away. The garden is providing us with supplementary fresh food, even if we can't live entirely off it. Right now I'm tucking into a fantastic damson trifle which Ian made today ... we have a temporary shortage of raspberries but damsons are in great supply and can be stewed with only the teeniest splosh of water. We even managed to do a small batch of washing up today, so it will be a delight to have clean cups for tomorrow morning's cup of tea.

And despite the garden looking rather sorry for itself on the whole, I'm still getting nice surprises. Although previously ravaged by slugs and pelted flat by the rain, this new pea flower just appeared as if out of nowhere. 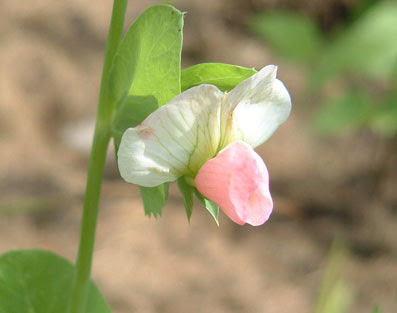 It's a variety called Taiwan Sugar which Patrick gave me, and although he told me it had pink flowers I wasn't execting them to be quite like this. I assumed they'd be the same two tone pink as the purple podded varieties. So I was rather delighted by their unusual candy pink colour, a nice little burst of cheerfulness on a grey day. Thanks Patrick!
Posted by Rebsie Fairholm at 11:04 pm

Sometimes those are the best surprises on a day when life can seem grim. Watching the BBC news has been depressing as we see all of these flooded places.

Rebsie,
Glad to hear that your house is dry, that's most important.
Well what would Thomas Crapper have to say eh?

Just re-read the strapline to my blog.... gardening 'within flooding distance of the Thames in London.....' Well it's about 200 yards from where I'm writing this but I reckon it would have to top 2 or 3 feet above the high tide mark to breach the walls. That said my wife's office flooded it being the lowest building in a tarmac yard - about 10 inches of water mixed with some sewer as well - disgusting.
I don't want to seem cynical but I wonder if we'd see as much coverage on the Beeb if it weren't for softy southerners and Londoners that are now taking a pasting???

Fingers crossed and buckets at the ready.