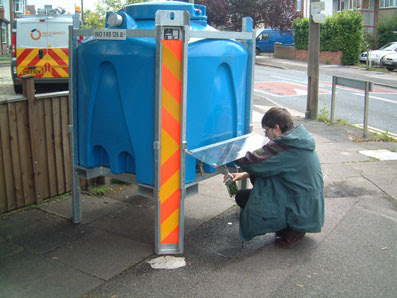 This bowser is our sole water supply ... my husband Ian filling up bottles there this morning

Well, I'm still here ... and for that I'm exceedingly grateful to the Fire & Rescue services and army and navy units who worked through the night knee-deep in floodwater to save our power supply. Last night we were afraid we would lose it as the Walham power station was only two inches from total inundation, but they managed to rescue it. It is pretty stupid that most of the population of north Gloucestershire is reliant on a single substation, and for that matter a single water works, but there you go.

All credit to those involved in the relief effort though. Within hours of our tap water running dry there was a bowser tank installed on the corner of the street, about 200 yards away from us. It's not ideal, and we still have nothing to wash in because this water is for drinking only, but when you consider the scale of the problem (and it probably is difficult to imagine the scale of it unless you're here) there is a sense that the emergency services are doing everything they can to help as many people as possible, and we're just sitting it out.

The weather was lovely here today, which made the crisis seem a bit unreal, and there were people out mowing their lawns. There has been a near constant wail of emergency vehicle sirens though since Friday when the first floods came. Not much activity in the street, except for people walking up and down with water bottles to collect supplies. Round here at least, people were just collecting as much as they could carry on foot, no more than a couple of 2-litre bottles. I didn't see any selfish gits filling the boots of their cars with huge containers. But even so, some of the bowsers in our neigbourhood had run dry by the end of the day. They are not all that big, and there's such a large population here with no water. Well, about 100,000 in Cheltenham alone, though we spoke to a couple of friends today on the east side of town who haven't been cut off yet.

It's a bit strange getting used to the absence of water. We have a few bottles of tap water we collected yesterday while we still had it, and we're using that for cups of tea and teeth-cleaning. Drinking water is not a problem yet as we have a few bottles of mineral water and other drinks stashed away. But we can't really do any washing up, so tea is made with fresh water in unwashed cups. And we can only wash our hands by dipping them in an ice-cream tub of not-terribly-clean water. No chance of laundry, nor of more than a cursory wash.

My main job for today was to decant rain water from all the flower pots I could find in the garden into a watering can, which was then transferred into a bucket for flushing the toilet. I then spread out the empty pots and containers on the patio table to catch as much as possible of the forecast deluge tomorrow. We need as much rainwater as we can collect. The toilet is the main issue, and we found the hard way that it takes a lot of water to flush it. We only have what's in the rainwater butt, and can't afford to waste it. So it's not possible to flush the toilet more than once or twice a day at most. I've taken the precaution of digging a makeshift earth closet in the garden which may work better, although we haven't resorted to it yet. A pee bucket has also been pressed into service.

This evening for dinner we had a baked beetroot from the garden (ideal because you don't have to wash it, just cook it in foil and peel the skin off before serving) and some boiled potatoes, which were a luxury because I had to use some water to cook them (a minimal amount though, if you cut them up small). Dinner was a tiny bit gritty with earth from the unwashed root vegetables, but that's OK. I tried to reuse the hot potato water to wash up my tea cup, which turned out to be a bad move. Still, that's one advantage of having to harvest all my potatoes early to escape the blight ... I have a very welcome cupboard full of them. The garden is suddenly turning out to be a godsend, providing us with fresh food and rainwater. We're very lucky, because so many people here live in flats. I've no idea how they're coping.

We ventured out to Tesco's at half past nine this evening (it's a 24-hour one) to see what we could find in the way of provisions. We didn't expect to find much, to be honest. We walked there, partly because I wanted to exercise my bad foot (now healing well). The streets were very quiet. 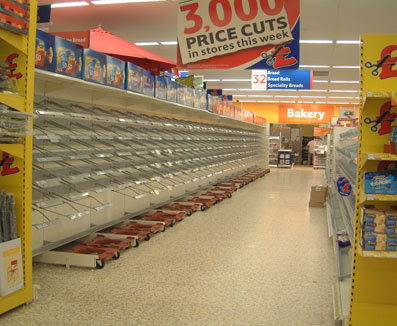 No bread in Cheltenham ... this is the bakery aisle of our big Tesco's superstore this evening.

It was fairly predictable what they'd run out of. Bread. Sandwiches. Disposable plates. Baby wipes. Anti-bacterial surface wipes. Buckets and bowls. In the kiddies' holiday toys section buckets were sold out while spades stayed resolutely on the shelf. Other than that it looked pretty much like a normal stock of stuff. Scented candles and exotically fragranced bath oil seemed strangely out of place, beautifully bright and colourful on the shelf but about as useful in the current situation as a chocolate teapot. It's quite weird knowing that everyone else in the shop, and in the whole town, is in the same situation. Nobody is buying bath products, because nobody has a working bath. I could hear people laughing and joking about having to resort to medieval-style toilet facilities. But of course they're not joking, and the humour comes from the shared experience.

There weren't many people in there panic-buying. The man behind us in the checkout queue was buying a single box of Frosties. Luxury and cosmetic goods didn't seem to be selling very well, so no shortages there. But I was impressed to see they did still have about a dozen (rationed) bottles of organic milk. We left that though, because we still have some milk in the freezer and others will need it far more than we do. I did selfishly grab the penultimate bottle of disinfectant though. And we found some plastic cups. Remarkably, they were stocking themselves up with a mountainous stash of bottled water, which is a good sign because it's been very hard to get so far. Earlier in the day the army were dishing out rationed water bottles in the car park outside (six litres each) and yesterday in the supermarkets people were so desperate they were nicking it out of each other's trolleys.

There was no spirit of meanness in there tonight though. In fact it felt very relaxed, and not at all like the frantic cattle market it is on a normal day. Everywhere you looked people were smiling. Nobody was in any rush, or showing any stress, just sauntering around seeing what was available. It was so much nicer than it usually is! People can be so selfish and horrible when preparing for an imminent crisis but as soon as the crisis becomes a reality they all start talking nicely to each other and smiling. In some strange ways Cheltenham is a nice place to be at the moment. 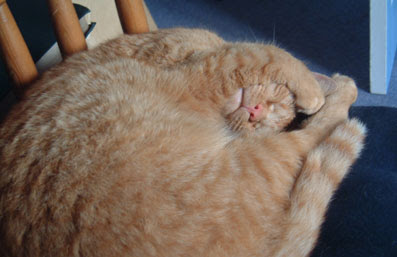 Some people are not very bothered
Posted by Rebsie Fairholm at 11:13 pm

It's shocking how much we rely on services we take for granted and how basic daily life becomes when they fail. But it's reassuring that neighbourhoods seem to discover their community spirit in times of crisis. I bet people have discovered good neighbours they didn't know existed.

PS - I've recommended your blog as one of my favourite reads

This reminds me of my parent's situation in Zimbabwe. No running water, no electricity, except for possibly one day a week. You can't buy food there either, but at least they can eat their own home-grown vegetables.

If you get bored (and still have power) you could continue the Seven Random Garden Things About Me Meme I tagged you with. Details of which are on my blog. It must be very humbling over there but hope the garden offers some comfort.

You've given us more insight into how it really is during the flood, and afterwards, than we would get from any news report. I feel so bad for everyone dealing with the flooding.

Congratulation for the great post. Those who come to read your Information will find lots of helpful and informative tips. Portable Toilets Gloucester