Today in the garden ... potatoes and poppies 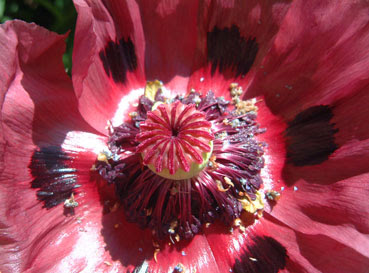 Here's the first of the oriental poppies (Papaver orientale) and this one didn't flower last year so I'm all the more grateful for it. It only produced this one bloom which opened just as the weather changed and it got pelted with fierce winds, rain and hailstones, but it survived. It's a variety called Patty's Plum.

I must thank Vicki of I Need Orange for linking me to some info about the blue speckled slow worm I recently posted a photo of. (She has some pretty amazing wildlife photos on her own blog, by the way.) Apparently they sometimes develop the blue colour when they're three years old or more, especially in coastal areas (I'm in the midlands, but never mind). I didn't know slow worms lived for multiple years, but that one was quite a whopper, admittedly. It's now living under a black polythene sheet in the middle of the veg patch and somewhat thwarting my tomato planting as I dare not move the sheet. As they're a protected species and they do a sterling job in munching slugs and snails off the vegetable patch, priority goes to the legless reptiles. (And we all know a few of them, right girls?)

And another beautiful item of wildlife, courtesy of next door's pond, is the damselfly. Available in two colours, bright azure and bright red. Here's one of the red ones, perching on a leaf on one of my heritage peas. They are smaller than dragonflies but just as welcome in the garden and also more likely to hang around long enough to be photographed. 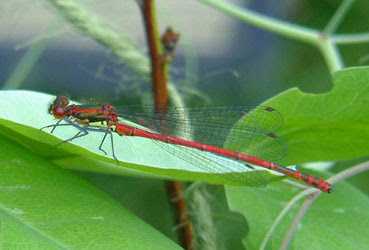 I got an electric shock off a beetroot today. I'm not sure who was more surprised, me or the beetroot. In fairness I had just been stroking one of the cats so that must have built up a static charge which zapped when I touched the leaf. I've had a lifelong problem with static electricity ... when I was a kid I had to have other people open car doors for me because if I touched any part of the car (plastic, metal or glass, inside or out) I would get a really nasty electric shock. Thankfully it's nowhere near that bad these days but I'm still more prone to static shocks than most people and I've never found out why. 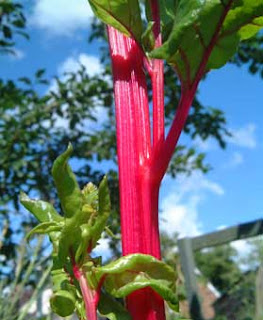 Talking of beetroot, I've read in several gardening books that you must never, ever allow leaf beet to run to seed at the same time as beetroot because they will cross with each other and both be ruined. Well I can't resist a challenge like that, so I've got three of last year's Cheltenham Green Top heritage beetroots sprouting nice big flower spikes among the similarly robust flower spikes of last year's Bright Lights chard (two pinks and a scarlet). Chard and beetroot are both the same species, Beta vulgaris, which is a rampant outbreeder so they cross like the clappers. They do however have minor varietal differences, with chard (var. cicla) producing nice succulent stalks and leaves, and beetroot (var. conditiva) being optimised for plump edible roots. If you cross them you will probably end up with the worst of both worlds ... inferior roots and small leaves, at least for the first generation or two. But with a little patience and careful selection they should start to separate out in lots of different ways. And that could *possibly* result in beetroot infused with some of the beautiful intense pinks and reds of leaf beet. Modern beetroot breeding has focused on other factors of commercial importance to farmers, such as "monogerm" varieties (seed clusters which only contain one seed instead of the usual 2-5, eliminating the need for thinning). I don't know of anyone who's trying to produce new beetroot with beautiful leaf and stem colours. So that seems like a good reason to try it. And as always, the beauty of amateur plant breeding is that even if it's a total cockup, you can still eat it.

Everything you ever wanted to know about beetroot can be found in this wonderful eBook, made freely available to all by the generosity of its author Stephen Nottingham.

May I also draw your attention to the much underrated flowers of the common spud? Well, this is not one of the really common ones but it's enjoying a renaissance in the UK ... Salad Blue, which is not a salad potato at all, being very dry and floury, but it certainly is completely blue. I don't rate it that highly for flavour but it produces very interesting blue mashed potato which has health benefits over ordinary white-fleshed potatoes. And as you can see, it has very pretty flowers sporting blue-violet petals and unusually dark anthers. It's the first of my potatoes to flower this year, and no doubt I'll be posting more pictures of spud blossoms over the coming weeks as some of them are very beautiful. 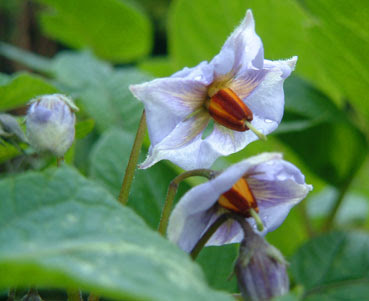 I've never looked at potato flowers quite so closely before - what a lovely photo.

They are very beautiful indeed! I spotted buds on my potatoes today while I was earthing them up. Not long to go!

Saw an amazingly red poppy very close to an orangy one in a lane nearby. You interested in a pic or seed when it appears?
Phreddy
BTW, sent you an e on toms.

You are most welcome, ma'am, and thanks for the mention! :-)

Love the poppy, and the damsel fly, too. Nice capture!