Now, you probably won't have seen one like this before. I certainly haven't.

It showed up in the Heritage Seed Library catalogue this year, an heirloom pea which doesn't really have a name and is just known as Salmon Flowered. "I grow them as a curiosity," its donor says. I couldn't resist including it in my precious six choices. It differs from all the other pea varieties I know in the colour of its flowers, which as you can see are two-tone pink, the standard petal being a very pale pink, almost white. And very elegant flowers they are too. Not huge, but compact and well formed and very pretty.

But it has another peculiarity. It has enormously fat stems which are ridged and succulent, like a sweet pea. And it also has a sweet pea growth habit, producing branches which come out from the main stem at right angles, and bearing its flowers all in a gigantic bunch at the top instead of singly or doubly at each leaf node like a culinary pea. But it has the leaves of a culinary pea. (I have yet to eat its peas, but I'll let you know.) 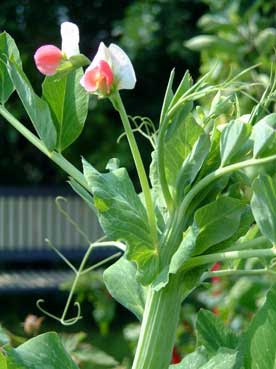 To look at it, I'd say it was probably made by a cross between a sweet pea and a culinary one. I don't know whether such a thing is biologically possible, because they are not even in the same genus let alone the same species. But that sure is what it looks like. And I'm itching to cross a few myself now just to see if it works.

I'm also using it for one of my sideline breeding projects. Although the main focus of this year's crop is to produce a stock of seed so that I can continue growing Salmon Flowered in future years (and hopefully share it with others), I'm making use of some of its abundant pollen by hand-crossing it with another pea variety, Alderman. That's a conventional white-flowered pea, albeit a tall one, with exceptional vigour and knockout flavour. By crossing these two I'll create a hybrid, and then in the next generation I'll backcross that hybrid with Alderman again. I may need to do that several times. The idea is to keep most of the existing characteristics of Alderman but introduce the pink flower genes into it. I'm also trying the same thing with Ne Plus Ultra.
Posted by Rebsie Fairholm at 11:35 pm

Hi Rebsie, more lovely pics of pretty varieties. Worth growing for the flowers.
You really have me hooked now. I will take a pic of the peas here in BG. Great swages of pods on dwarf plants. Past their best by our recconing but about ready for picking and conserving I think.
My Alderman peas arrived yesterday so I soaked them for an hour or so and the swelled rather alarmingly. I was somewhat afraid to squash them as I planted them but they are planted now and I'm waiting to see if they will work or rot.
I also came upon an Early Alaskan and a Lincoln Shelling both very small seeds. I will try a few and let you know what they are like.
Phreddy

It looks amazing, and I'll be interested to know how it tastes.

that is one sexy looking pea blossom!!

I am just starting my own foray into organic/hertitage gardening, do I'm glad I found your blog!

Rebsie - just to let you know the mr bethell's flowers are exceptional - almost like sweet peas. next year will you have any ne plus ultra to swap??

Love looking at your pics, and reading about your cross pollinating experiments. I've been lurking recently, so thought I'd post a hello.
Sweet pic down a ways of the california poppies, and its hat coming off.
I too am growing rainbow swiss chard and beets. Had no idea they cross breeded!

Thanks everyone for the lovely comments.

John - I'm so glad you like them! I hoped you would. I should have plenty of seed from Ne Plus Ultra so I'll put some aside for you.

Phreddy - yes, do let me know how your peas get on, especially the Alderman.

By the way Phreddy - don't worry about the alarming size of Alderman ... it is the largest and plumpest pea variety I've ever seen, so that's kinda normal.