Today in the garden ... a pleasant surprise 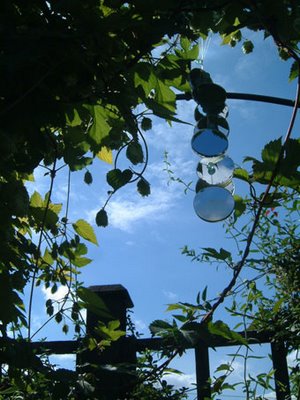 Golden hop growing over an arch with a dangly mirror thingy

I'd like to say a big thank you to all of you who have left comments ... I really appreciate them. It means a lot to me when people tell me they've found my little instructional articles useful. And I thoroughly enjoy writing them.

I'm working on some detailed reviews of all the heritage fruit and veg I've grown this year, so watch this space.

I've had a very busy week, with my parents visiting for a few days and also a lot of time spent on music. I had an invite from a band whose music I really love, asking me to sing a lead vocal on their forthcoming EP (woot!) so that's taken priority over other things.

I've still had time to do a bit of digging though, trying to make room for some Chinese cabbage (which I've never grown before) currently languishing in pots on the patio. The soil here is wonderful; even though the area I dug over had been overlaid with lawn for years, it only needed a couple of turns with a spade to make it into a perfect dark crumbly tilth. A fellow Cotswold gardener I spoke to recently described the soil around here as "like chocolate cake" ... and it is. When I dug into the compacted earth under the lawn, full of bits of limestone, it looked like a slice of chocolate fudge with honeycomb chunks. Mmmmm. Not that I'm obsessed with chocolate or anything. But it's probably one reason I became a gardener, because I used to love making mud pies when I was very small and although I discovered fairly early on that they don't taste anywhere near as good as they look, the infatuation with soil has never left me. 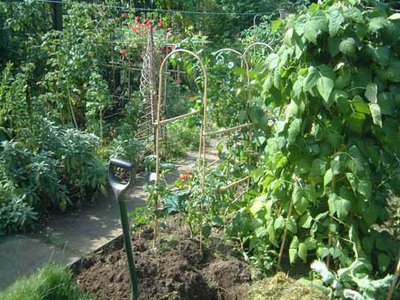 Sage and raspberries on the left, Mrs Fortune's climbing beans on the right, and lots of lovely chocolatey soil.

The bad news is, the largest and most luxurious of my experimental hybrid peas had its stem chewed right through by a slug or snail this week. And the next day two more had been bitten off at ground level. That may mean I'm now down to 8 plants. It's a bit ironic really because the slugs and snails have been very efficiently controlled by the assorted reptiles in the garden, and hardly anything gets eaten. But when they do eat things they find the stuff that's precious and irreplaceable. I'm going to try sprinkling some fine grit around the stems of the plants ... the stuff that's used at the bottom of bird cages. It doesn't kill them ... they just don't like crawling over it because it's scratchy on their little slimy undersides.

When I decided to plant some heritage apple trees earlier this year I did some research to find out which varieties were most local to my garden. One was obvious ... the relatively well known Ashmead's Kernal which originated in Gloucester (about 7 miles away) in around 1700, and readily available on local farms. It has a lovely acid flavour for those who like acidic apples (which I do). The second most local apple is Tewkesbury Baron, originating about 12 miles away, and that was a bit less exciting. In fact I was rather disappointed, because what little info I've been able to find about this rare variety describes its flavour as insignificant. I had to think long and hard about whether I wanted to plant an apple tree in my garden whose fruit didn't taste good, bearing in mind the space it will take up and the shade it will cast. It was certainly a dilemma, and when I decided to go for Tewkesbury Baron it was pretty much an act of charity on account of it being rare and endangered. And as I used to live in Tewkesbury I'm probably a bit sentimental. I planted it in the least favourable spot, where it thrived rampantly despite being on the shadowy side of the garden.

My apple encyclopedia describes Tewkesbury Baron as having "little flavour". The Brogdale National Collection website, by far the most definitive apple guide in the UK, says "Fruits have a little coarse, dry, white flesh with an insipid flavour." Uh?! I just tried mine today. No complaints here. 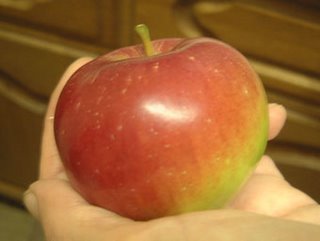 It's a nice looking apple, having a proper old English shape and size with a deep pinky red skin (flushed green where the sun doesn't get to it) and a very waxy shiny surface. Texture-wise the flesh is slightly grainy, but succulent and bursting with juice. The flavour is exquisite. It's so tangy it's almost fizzy. It's got distinct sharpness and sweetness in a beautiful symbiotic balance. I'm really bowled over by how good this apple tastes.

Maybe it needs the chocolatey soil of North Gloucestershire to develop its flavour potential, or maybe there's some other reason Tewkesbury Baron got a reputation for blandness, but I'm certainly delighted to have it in my garden. 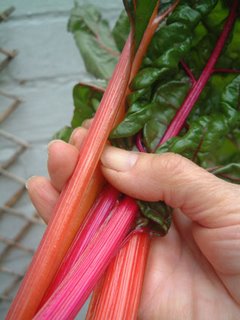 We're eating very well from garden produce at the moment ... chard, beetroot, onions, garlic, potatoes of all colours and a profusion of beans. Not to mention the herbs, from Italian thyme to Greek oregano. Yum.
Posted by Rebsie Fairholm at 10:42 pm

You're making me hungry, for new apples, and for chard.....

I used to live at the bottom of every hill. There were disadvantages to living down there (backed up drains!), but the topsoil was feet deep (planted a good-sized serviceberry, and never reached the bottom of the topsoil, over two feet down).

I grew lovely tomatoes and peas and beans down there.....

I'm looking forward to your heritage veg reviews. Next season I'm going to make an effort to source at least one heritage variety of each veg I grow to compare taste,cultivation and keep them in existence.

A pity I didn't read your post on seed saving before I spread my Golden Sweet seeds complete with goo on a paper coffee filter to dry - which they did and I can't get them off! Patrick at Bifurcated C cleverly suggested tearing the filter into small pieces and planting the seed that way.

Don't worry John, you haven't done anything wrong. There's no harm in them being stuck to the paper, as long as they're spread out so that the seeds themselves aren't sticking together. Patrick's right, you can just tear round them when you want to plant them and sow them with the paper still attached.

It had never occurred to me that the deep fertile soil in my area might be something to do with having hills all around us ... but now you mention it, that would make sense!

What's a serviceberry?! It sounds intriguing. I don't think we have them over here, or at least not with that name.