Today in the garden ... pinkness

Its top is as much pink as it is green, and its long tapered root doesn't look like conventional globular beetroot, but Cheltenham Green Top is an attractive plant and the flavour is absolutely sublime ... like no other beetroot I've ever tasted. Wrapped in foil and roasted in the oven, it comes out exquisitely rich and sweet. I mentioned my heritage apples which originated only 7 miles from where I live. Well, this beetroot probably came from right here, and although its age and origins are unknown the Gardener's Chronicle reported in 1889 that "scarcely any other is grown in the market gardens around Cheltenham". It certainly thrives very happily in the sandy soil in this area. And it overwinters here too ... several I left in the ground last year (for seed saving) were absolutely fine outdoors, despite the received wisdom that beetroot needs to be lifted and stored over winter.

And at last! We have a few ripe tomatoes. 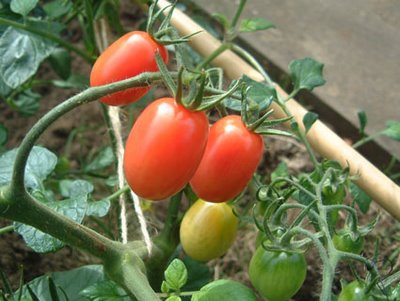 These are Pink Jester tomatoes looking just as they should ... pinky-red, smoothly grape-shaped and shiny shiny!

It's a funny thing about these Pink Jester tomatoes. As I said in a previous post, I'm not sure whether Pink Jester is its real name or just adopted for marketing purposes. I originally saved the seeds from a beautiful packet of tomatoes I bought in Marks & Spencer's (an upmarket UK food store ... well, upmarket by my standards) about five years ago. If I really like a vegetable I buy from a supermarket and it has seeds in it I always try to save some and regrow it. Occasionally if it's imported produce the variety doesn't take to the UK climate, but for the most part it works fine. Although the original punnet of tomatoes was imported from Spain I've been growing them (outdoors) ever since and they've usually done well ... I'm still planting the original seedstock and I'm still getting 100% viability. As far as I'm aware Marks & Spencer's have long since dropped the variety, and it doesn't seem to be available anywhere else, so I'm glad I saved those seeds. 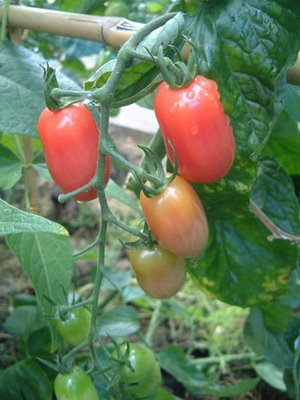 These are beauties too ... but they're not supposed to look like this!

But this time only one of the three plants looks as it should. Pink Jester normally produces very smooth symmetrical fruits, red but with a distinctive pink hue. Although all the plants look similar in terms of leaves and flowers, two of them are producing fruits which have the right colour but an elongated and blocky shape with a pointed end. They're looking more like a small pink San Marzano. And yet they're from the same batch of seeds I originally saved from one punnet of fruit, and I've never had these oddities before.

But ... I'm not complaining. Because of my interest in plant genetics I'm always absolutely delighted when something in my garden comes out weird and different. I like the look of these dangly tomatoes even if they're not proper Pink Jesters. I assume one of two things has happened. Either they got cross-pollinated with an elongated tomato on the Spanish farm where they were originally grown. Or Pink Jester is an F1 hybrid, and the genes are segregating (de-hybridising). A third possibility is that Pink Jester is naturally variable, but I doubt it. 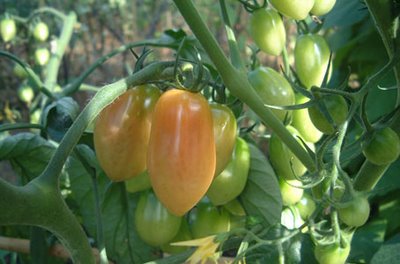 This is not what Pink Jester should look like either ... but I do love the quirky shape and peachy colours

I'm not a consumer-minded person and I rarely covet material things, but there is one expensive item I would really like to have in my life: a greenhouse. I have a redundant corner of the garden which gets full sun in the winter but only dappled sun in the summer, and which is just the right size for a 6' x 10' greenhouse. The only difficulty is paying for it ... being a musician is not exactly a lucrative pursuit, and I'm not in any hurry to go back into publishing which has just got more and more competitive and stressful over the years. But I've managed to get some paid web-design work lined up, and my mum has very kindly offered to sub me the rest.

I went down the garden to get stuck into clearing out the corner where the greenhouse is eventually going. When I first moved here three seasons ago the garden was full of overgrown shrubs and trees and I had to prune my way through it before I could do much else. I ended up with a big pile of twigs and branches which I just dumped in a shady corner at the bottom of the garden, because I had other things to get on with and I didn't know how to get rid of them. A few months ago Cheltenham Borough Council introduced a garden waste collection service, and that's been a godsend in stopping the twig pile from building up any further. But now I want that spot for my greenhouse I have to clear out what's already there.

I thought I was in for a mammoth job of cutting up the twigs and stuffing them into the council's green bag, which is only collected once a fortnight. But then I realised they had been there so long they were all dry and brittle, and the most practical solution was just to spend half an hour jumping up and down on them. Which I did. Then Leafblower Dave came out to see what was going on because he heard the twiggy crackling noise and thought something was on fire. It's OK though, the neighbours already think I'm a madwoman so no change there. 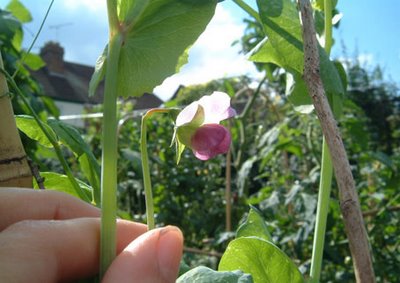 One of many varieties of pea simply known as "purple podded" ... and as I begin to collect them from different sources it's becoming apparent that they're not all the same

The Alderman peas I sowed in July are now producing an abundance of flowers and pods are starting to form. The weather is perfect for peas at the moment ... sunny but cool. I'm going to be running a more organised trial of purple-podded peas next year but I have got three lots on the go at the moment for a kind of preliminary comparison. One has just started flowering (photograph above) ... it's one of the unnamed cultivars just known as "purple podded" and the stock originally came from Devon-based seed merchant Edwin Tucker. It's clearly not the same variety as the Mr Bethell's Purple Podded I grew earlier in the summer (and am growing a second batch of it now, which hasn't flowered yet). The flowers are smaller, and the colour less rosy. They have a whitish standard petal (that's the outer one) with a mauve flush, and a darker purply-mauve wing petal. Definitely less attractive than Mr Bethell's Purple Podded, although it's still more decorative than most white-flowered peas.
Posted by Rebsie Fairholm at 1:12 pm

I love beets. If I ever plant a garden again, I'm going to be looking for so many of the varieties you enjoy......

(So interesting, where our languages converge and diverge!)

A greenhouse - now that will extend the possibilities of what you can grow, extend the season both ends and allow for more experimentation.

Hi I Need Orange ... I'm currently working on a glossary of Anglo-American gardening terms ... there are so many interesting differences in terminology.

I'm always happy to give away any surpluses of seed I have, so if there's anything you've seen on the blog which you'd like to try but can't easily get hold of then let me know!

Hi John ... yes, the wonderful possibilities that a greenhouse offers are proving to be a great incentive for tackling that pile of nettle-infested twigs I've been ignoring for two years!